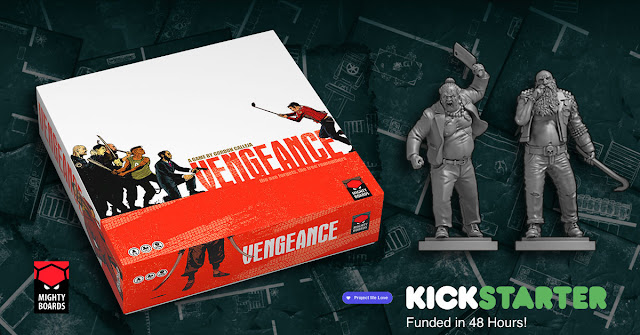 Vengeance is a competitive, miniature board game for 1 to 4 players that embodies the essence of revenge movies such as Kill Bill, Old Boy and the like. Like any good revenge film, the game opens up with the Wronging, during which players find out which enemy gang performed unspeakable acts on their respective Hero. Here they devise the opening strategy they intend to follow by drafting gang bosses that have wronged them.

Gameplay alternates between Montage and Fight Turns. During Montage turns, players recuperate their strength, arm themselves with various upgrade items and skills and prepare to scout gang dens to find the bosses that wronged them. During the Fight, they then proceed to attack a den in an attempt to take out the resident Boss, or its minions, or both in order to score victory points. Players can deny each other points by killing bosses needed by other players get to them.

Fights are basically dice-based puzzles. In each round of the Fight players roll a set of dice and decide the order in which to play them. Upgrade skills and items allow them to swap die-results or string them together to perform combos giving them more control over their fight actions.

The Rosari Gang Pack expansion, adds a 5th gang and hero, as well as new dens and miniatures. Vengeance also has a rich solo mode where each hero gets a unique mission, setup and objectives based on their back-story.

The campaign for Vengeance was funded after just 48 hours and is currently sitting at $68K+ with 22 days to go. Mighty Boards has recently uncovered stretch goals including 29 new miniatures to beef up the existing 51 taking the total to 80.

If you like miniature games with a compelling story line and action packed game play check out the Vengeance Kickstarter campaign at: https://www.kickstarter.com/projects/mightyboards/vengeance-2