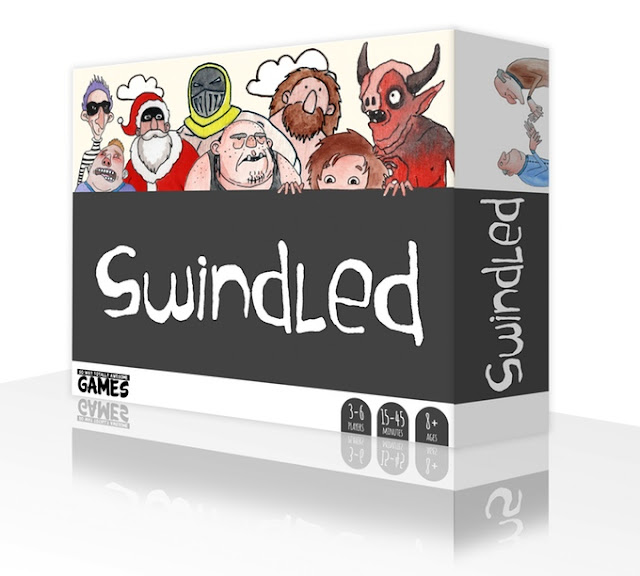 WARNING: This is a preview of Swindled. All components and rules are prototype and subject to change.

Swindled is a fast paced party card game where players are trying to keep cards in their hand while trying to get rid of their opponents cards.

To play Swindled players are dealt seven cards which they will use to get more cards into their hands and to remove cards from their opponent’s hand.

On a player’s turn she will play one card form her hand resolving the text on the card. That is it, it is that simple. Where the fun and strategy comes in is using the text on the cards to your advantage and knowing when to play them. Each card has varying effects like drawing a card or stealing a card from an opponent. Some cards have you play a short “mini” games against another opponent or opponents. Each time you play a card from your hand you are one step closer to being eliminated however if you play your cards right you may gain additional cards or make your opponents loose some of theirs.

Play continues until players run out of cards and are eliminated. When a player is eliminated the player who caused the elimination takes that player’s color card. When there are only two players left the player with the most color cards wins!

Rules and Setup:
Setup for Swindled is fast and simple: deal each player seven cards and a color card with accompanying color pawn. Then put the remaining cards in a draw pile in the center of play along with the draw bag, dice, and tokens.

The rules are easy to learn as players are simply playing a card from their hand and following the text. Some of the cards need a little clarification, however you can find those easily in the rule set.

Theme and Mechanics:
I am not sure there is a strong theme associated with this game as there are a lot of different characters and sub themes being introduced by the various cards. This is not an issue as the game plays well regardless of the theme.

The mechanics of playing a card and resolving the text is simple enough, but as I said before the game really boils down to knowing when and how to play your cards most effectively.

The player elimination aspect of the game is not a big deal as players are normally only sitting out for a short time.

Game Play:
Game play is quick however I never got down to the 15 minutes as specified by the publisher. Most our games ran 30 minutes plus. With the rules being as simple as they are play moves along nicely keeping all players engaged.

The 8+ age recommendation seems right for this game, although my seven year-old son could easily play this. That being said I am not sure I would introduce my kids to this game as some of the cards I feel are not suitable for his age range.

Artwork and Components:
With this being a prototype I cant say much about the components. It was produced at The Game Crafter so it is decent quality, but not final.

I believe the artwork is all final so I will comment on this. It does a nice job tying in the various themes and characters, however it is not a style I enjoy. Others may really like it though as it is very unique.

The Good:
The fast paced play and simplicity of Swindled makes it accessible to many different types of gamers and gaming groups. It is fun and light, while still having a strategic element to it.

The Bad:
For me it has to be some of the cards like “Russian Roulette” which is not something I want to have to explain to my children. I have friends that struggle and have even succumbed to suicide, so it is not a subject I take lightly.

Final Thoughts:
Swindled is a wonderful fast paced party card game with a lot of take that and take that again!!! Great for gaming groups looking for a whimsical game full of bantering and backstabbing.

I am giving Swindled 6.5 out of 10 super meeples.
Get your copy of Swindled on Kickstarter.com today!