This is a guest review of Rome by Jeremy Davis from GameGeek.Ninja. 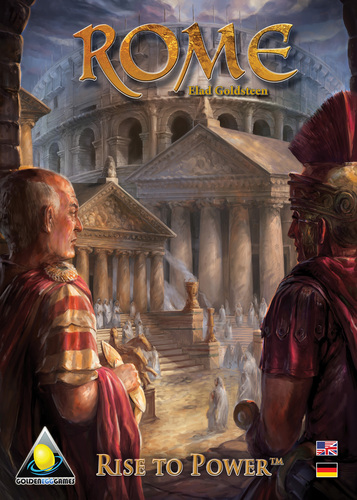 Let me start out by saying that I really like this game. I didn’t necessarily think that I would. I could see it being popular with some of my friends, but Rome is not really my thing. I am so glad that I am open to trying new games, because I really liked this one.

Rome: Rise to Power (Golden Egg Games) is a game that has a lot of different mechanics working all at once, but never manages to get overly complicated. Basically, on your turn you are going to roll your dice once. Based on that roll, you determine which player goes first and start using your dice to bid for cards that are laid out each round. These cards are in three rows, each a different category: Provinces, Senators, and Arena cards. All of these do different things, which is what makes the game a challenging and fun experience.

Let’s take a look at each part.

First, the dice mechanic. At the start of each round, everybody rolls their four dice at the same time, and keeps that roll. You will use these dice for everything. And the best part about it is that rolling low actually works in your favor (in case you don’t know, dice are the bane of my existence). Starting in order from lowest to highest roll, you determine player order for the round. The first player starts by placing one of their dice at the top of one of the different card tracks, essentially bidding for the opportunity to buy one of those types of cards. Then the next player places a die on one track, and so on, until everyone has placed all four dice. 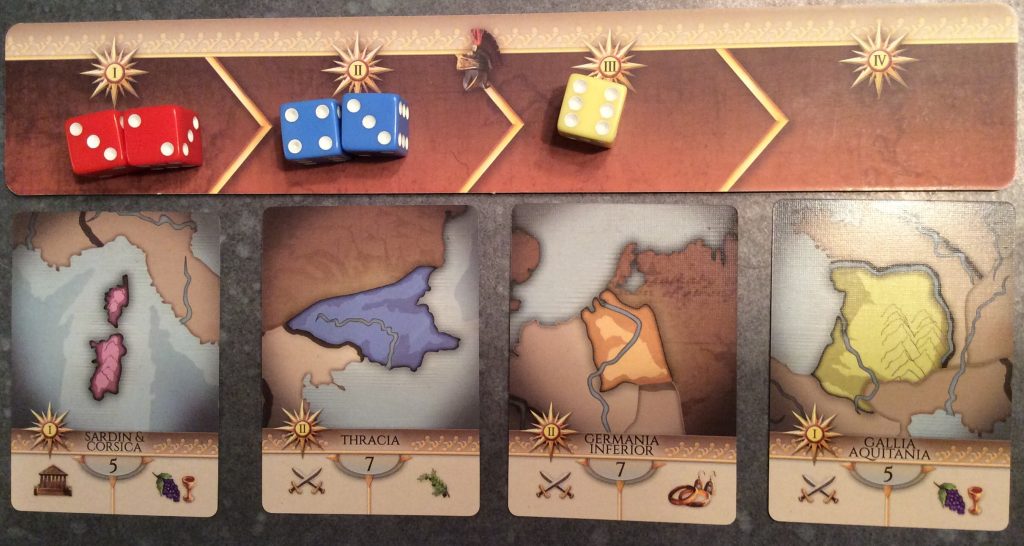 Here’s the fun/challenging/somewhat complicated part: The first die (let’s say a 4) is placed in the left-most position on each particular track. This means that player will get first choice of buying (with the total value of the die/dice in that spot) any card they can afford from the cards below the track. But…if someone comes along and plays a lower-valued die (say a 3) on the same track, it slides to the left, replacing the first die (the 4) as the left-most die and the 4 moves one space to the right. So…it is beneficial to have some lower dice. However, (and this is important and cool) you can add dice to a space – increasing your total – but the die you add to the space must be equal or lower than the first one you put there. So if I had placed a 3 on my first time to get first choice of Provinces, I would have to place another 3 or lower in order to up my total to be able to buy a card that was valued at 5 or 6. This sounds very complicated, but once you see it in action, it is very intuitive and fun. This is the mechanic that makes this game fun.

So what do the cards even do?

Provinces: If you place your dice on the Military dice track, you get to bid for and acquire Province cards, which do several things. The first thing they do is give you control of one of the provinces on the map, which are used in the end-of-game scoring. If you have the most provinces in a region, you get 2 victory points (VP). If you control the entire region you get 3. Doesn’t sound like a lot, but in one of our games the score was 29 to 25 to 24. The second thing they do is allow you to move your tokens along the forum track. Each province will be tied to one of the forum tracks (Olives, Wine, or Jewelry). Every time you secure a province, you will move your token one space further on the forum track associated with that province. These will also add to your VP total (scored on rounds 3 and 5) and are based on whether you have scored any points on the individual forum tracks at all, and how many other players you are ahead of. The third thing the Province cards do is work together with the Senator cards to allow you to use the special abilities on those cards – more on that in a second. Focusing on collecting just Province cards and ruling the world is a viable strategy, but some of the cards have a value of 9 and take at least two of your dice to purchase, so it could be a hard victory by itself. 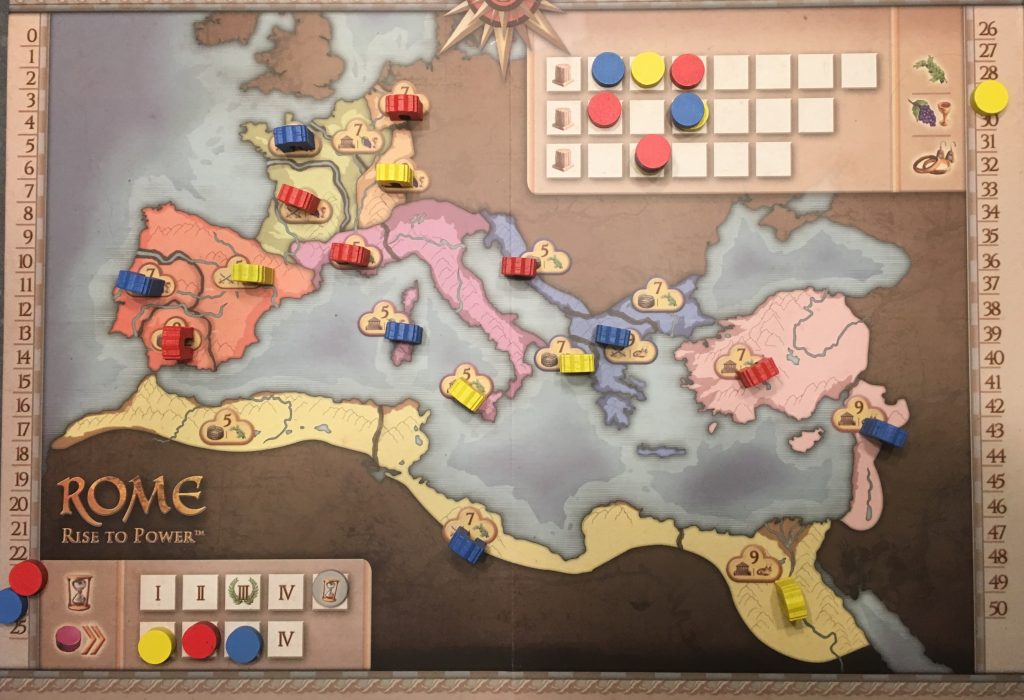 Senators: If you place your dice on the Senate dice track, you get to bid for and acquire Senator cards. These cards are different than the other two types of cards in that the dice value doesn’t matter. For each die you place on this track, you get to take one Senator card. So it is advantageous to place a very low number die on this track so that you can acquire the Senator you want and spend your higher dice on other tracks.

Once acquired, you can activate each Senator card once per round, as long as you have a matching symbol showing on the bottom of one of your Province cards. Each Province card has a type (Villa, Arena, or Army Camp) and if these match the ones on the Senator card you are able to use that ability. Each symbol can only be used once per round, so sometimes you will have to sacrifice using one ability in order to use another. These abilities are very useful and the best ones come out in the later rounds, so watch for these.

Arena cards: At the end of rounds 3 and 5, you will have the ability to put on a show in the arena. That is what the Arena cards are used for. By placing your dice on the Black Market dice track, you can essentially purchase Romans, Barbarians, and Beasts to fight for you in the Arena. At the end of rounds 3 and 5, everyone who wishes to participate puts together their best hand (kind of like a poker hand – don’t worry, there’s a chart) and plays them face down. All at once, everyone reveals their hand and the best hand wins. 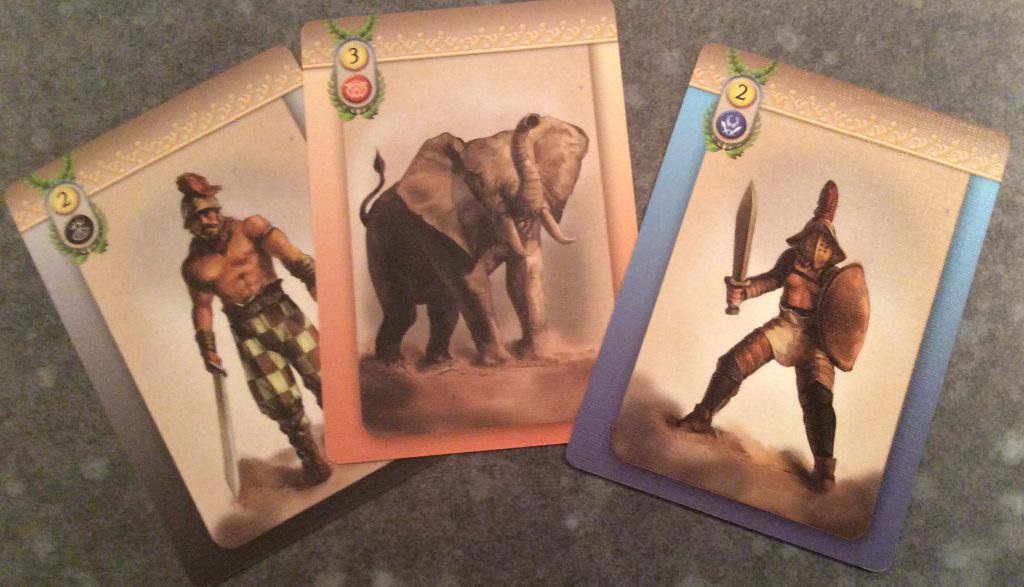 Well…wins 1 extra VP. Everyone gets VPs for the show they put on, the winner just gets more. So you can also play this track almost exclusively, but keep in mind that you only score points at the end of two of the five rounds, so you might want to do something else too.
Basically the gameplay is this: you are conquering Provinces to take control of Regions. You are purchasing fearsome Beasts and Barbarians to put on the best show. And, you are bribing Senators to do your bidding and allow you to use their resources to perform special abilities throughout the game. The combination of all of these maneuvers added together with the luck of the dice-rolling make for a pretty fantastic experience.

So the gameplay is awesome, but what about the components?

The components themselves are pretty good. The arch tokens for marking your control of Provinces are really a lot of fun. The scoring track tokens for the forum track and VP track are simple round tokens in the players’ colors and the dice are simple d6, also in the color of each player. The board is okay. The artwork is good, but the regions seem cramped when you have a bunch of arch tokens on them. The scoring track is definitely too small, since the tokens will not stay in place when two are right next to each other. Both of these things could have been solved with a slight enlargement of each one, but they are serviceable. The cards are good quality and the artwork on the Province cards and the Arena cards is really very good. The game could do with a couple of reference cards for each player. We found ourselves having to pass the rule book around quite frequently to check on the icons for the Senators and the scoring for the Arena shows, but I’m going to make those myself – that should solve that problem.

I really only had any issue with two things, both of them minor. One was the art on some of the Senator cards. Some of them were just not well-done at all (I’m looking at you, Hispania Maximus), and the names – although true to the time – were a little too spot-on (Hispania Maximus, Asianus, Africanus Maximus). 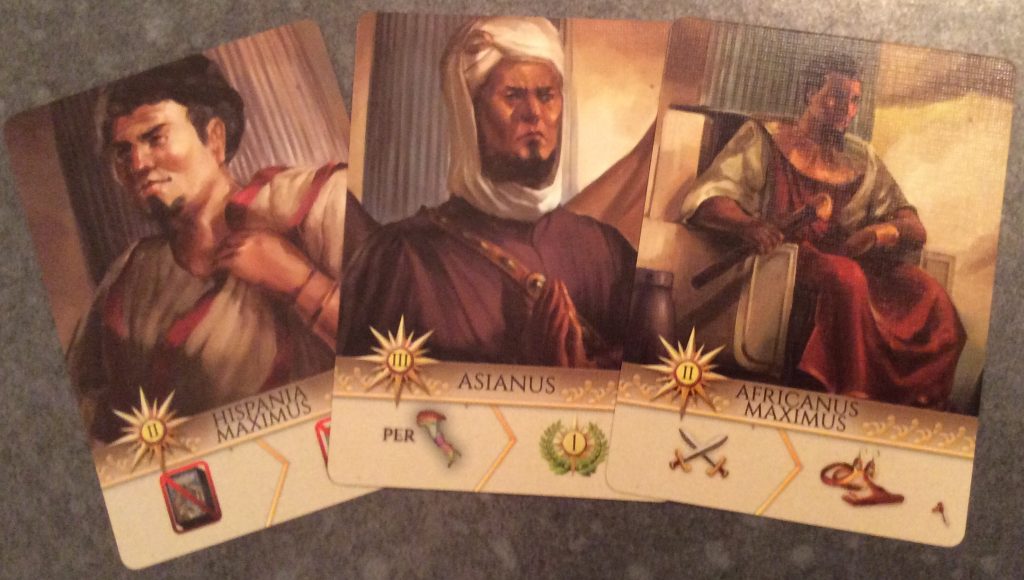 The other thing was the Black Market as a whole, purchasing Humans and Animals. It’s the same problem that exists in Five Tribes with the slave cards. The cards are true to the theme and true to the time. Some people may just have a problem with them. But these are really just minor quibbles.

So in the end, the game is great. I really didn’t think that I was going to like it as much as I did. I found the actual game play to be fun and engaging with a wide variety of strategies to employ, depending on the cards that came up on the different tracks and the dice values that you roll at the beginning of each round. I loved the final scoring and some of the Senator cards in the third tier really changed the game in the last two rounds, with the winner jumping from 17 to 29 VP at the end of round 5. I can see myself trying several different strategies. The last game we played, I was concentrating almost exclusively on Arena shows and almost won, but came up short because of the Regional scoring. The game is well-balanced and pretty fast, coming in just over an hour, but with future plays I’m sure it would go even faster. All in all, very solid.