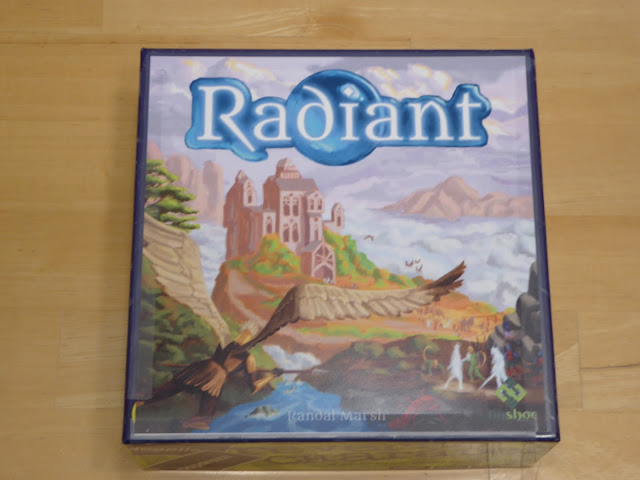 WARNING: This is a preview of Radiant. All components and rules are prototype and subject to change.

The world of Perim is in turmoil as the four native races battle for supremacy: Avis of the clouds, the Treefolk of the forest, the Stonedwellers of the mountains, and the Mariners of the sea. Each has power over it’s own domain however in every age one becomes Radiant and is able to spread it’s influence over all the realms.

In Radiant players build armies of soldiers, elders, and assassins from each race leveraging their powers to conquer and control the regions of Perim. The player who can do this the best will become Supreme Ruler and King over all of Perim.

To setup Radiant players will place the board in the center of play adding the battle tracker token to the middle of the board. Each player/team then takes a set of cubes of a certain color placing their score marker next to the “1” space on the scoring track. One silver coin is added to each temple spot on the board while the rest of the coins are set to the side near the board. The race cards are shuffled and the top card is revealed becoming the Radiant Race for the first age. The Radiant token is then placed in the corner of the board corresponding to that race. The cards are shuffled once again with each player being dealt a certain number of cards based on the number of players. Lastly nine cards are placed face up in a 3×3 grid near the board to create the drafting pool.

Radiant is played over three ages which in turn are broken into three phases:

Once phase three has been completed in the final age (Age III) the game ends and the player with the most points wins!!!

This is the basic game play for a two or three player game. If there is a fourth player in the game players will partner to create two teams. Play goes as normal except teams share cubes when taking over territories. Also there is no table talk allowed. 🙂

Rules and Setup:
Although the rule book for Radiant is not final it is very clear and easy to understand. I am hoping for a few more images to help illustrate and clarify certain rules but all-in-all it is great. I also like the size of the rule book and will discuss this more below.

Set up and clean up is quick as there are not a lot of components to this game. You can be up and running within minutes.

Theme and Mechanics:
I truly enjoy the world of Perim, from the four different realms to the diverse races and units there is a wonderful story to be told here. Randal Marsh, the designer, did a wonderful job creating this world and after playing Radiant I am left wanting to know more about it.

Radiant is a great mixture of three distinct mechanics: drafting, trick taking, and area control. Each mechanic stands out on it’s own yet when put together they create a wonderful symbiotic relationship. You can also throw in set collecting with the Meld phase which adds another dimension to the game.

Game Play:
I really like how each phase of the game moves seamlessly into one another building with what you have done. And at the same time I like how the game seems to reset after each age letting players who have done badly previously have the chance to catch up. Which happened in a few of the games we played.

Radiant easily plays within the 30 – 60 minute recommended time frame and I could see dropping the age level down to 10+ as my 9 year-old can easily play this game.

Artwork and Components:
Since this is a prototype I will not discuss the components in detail, however I would like to quickly discuss the size of the game and box.

Recently I have really become a fan of games that fit in smaller boxes. I think the reason behind it is that I can take more games with me when I travel. So I tend to look for games that offer a lot but come in smaller packages, Tiny Epic Galaxies is a good example of this.

Radiant could definitely fit into this category although I don’t know what the final box size will be, fingers crossed.

After getting the game and taking a look at it I touched base with Randall to find out who the artist was. To my astonishment I found out that he did all of the artwork on this project! It reminds me a lot of Ryan Laukat’s artwork which is the highest praise I can give it. Ryan is the designer and artist behind such hits as Above and Below, Artifacts Inc, City of Iron, and many more. Interestingly enough both designers are from Utah and both are members of the Utah Board Game Designers Guild.

The artwork helps add to the colorful story behind the world of Prim giving you a feel for the landscape and the races that inhabit it.

The Good:
I love the marriage of the mechanics in this game all of which seems to flow so well together. As you can see from above I also love the artwork and feel of the game and can’t wait to see how the final version comes out.

The Bad:
At first one thing that seemed disconnected to me was the Meld stage. It didn’t seem to fit into the whole of the game. However as I played it more I liked how it was a good tool for scoring and setting up your war phase. Players have to be careful though trying to go for big points in the Meld while ignoring the war, as it could come back to haunt them.

So I guess I would have to say the worse part about Radiant is that I don’t own the final copy yet.

Final Thoughts:
This is a great game for those looking to get more from a trick taking style game. I really felt Heroes and Tricks from Pencil First Games, and Diamonds from Stronghold Games did a good job of this and now we can add Radiant to that list.

From my kids perspective Radiant may be a game that has to wait until they are a little older. Understanding the subtleties of trick taking while adding the other mechanics on top is just a little too much. It doesn’t mean I won’t try though!

All-in-all Radiant is a game that will definitely go onto my shelf! It is a wonderful light weight game that is great for beginner gamers while at the same time offering amazing depth for more advanced players.

Players Who Like:
Trick taking games like Diamonds, Heroes and Tricks, and good old-fashion Hearts. Drafting games like 7 Wonders, Through the Ages, and Steampunk Rally. And Area control games like Risk, Small World, and Blood Rage will love Radiant!

I am giving Radiant 8 out of 10 super meeples.
Check out Radiant on:
BoardGameGeek.com
Back Radiant on:
Kickstarter.com now through July 6, 2017