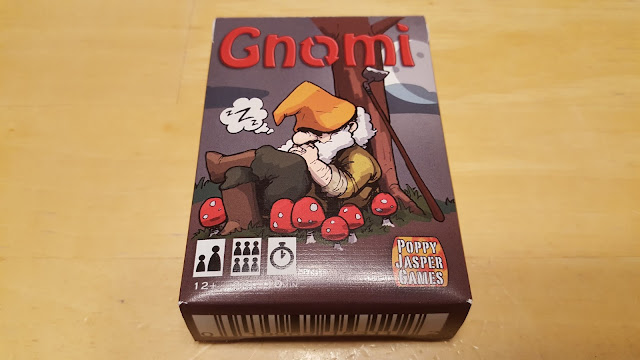 WARNING: This is a preview of Gnomi. All components and rules are prototype and subject to change.

Lace up the boots, put on your pointy hat, and grab a shovel it is mushroom farming time!

In Gnomi you are trying to protect your mushrooms from your gnome counterparts while trying to steal or compost theirs. The gnome that does this best will be king of the shrooms!

On a player’s turn he will do one of four following actions:

The game ends when all but one player has all their mushrooms composted and gnomes sleeping. The player with at least one mushroom or gnome right-side up wins!!!

The copy of Gnomi I received also came with the Golden Expansion which introduces three Golden Mushrooms and four new gnomes. With the expansion players will play three games in total with the winner of each game taking a random golden gnome worth a certain amount of gold. These gnomes are kept from game to game as part of a player’s hand and can be used like a regular gnome. Player’s also receive Golden Mushrooms which again are used as regular mushrooms and can be stolen by other players. When the third game ends players count up the amount of gold they have in their hand and the player with the most gold wins!

Now that you know how to play Gnomi let’s see what I thought about it.

Rules and Setup:
The rules that came with my copy of Gnomi were short and sweet, only taking up a small single sheet of paper (front and back). The game is very simple to pick up and easy to teach other players.

Set up is a breeze as you are only dealing each player four mushroom cards and three gnome cards. All done!

Theme and Mechanics:
I love the theme of gnome mushroom farmering and it works really well with the mechanics of the game. Sure you could do this game with a different theme, but gnomes are awesome!

Gnomi is a cool hand management deduction game where you are trying to keep your mushrooms from being stolen and composted while trying to figure out what your opponents have in order to compost and steal their cards.

I dig how this works and love the rotation of the cards keeping everything in your hand and in essence not needing a table to play on.

Game Play:
Gnomi plays fast, normally around 10 minutes, with three to four players and is pretty seamless. As I mentioned above it is easy to learn and teach, in fact the 12+ age range is a bit high in my estimation. I had both my 7 and 9 year-old playing with no problems. I would probably make that 8+ and feel comfortable.

Artwork and Components:
I absolutely love the artwork for Gnomi, which was done by the same artists as Lost Woods which I also love. The illustrations are whimsical and polished while the card layouts are very functional and easy to interpret.

I am not sure how the final version will be made but the card quality on the prototype was very good.

The Good:
Artwork is number one, it drew me in immediately. The game play is solid and fun. I really enjoyed the back and forth between players and the suspense as the end drew near and you were trying to figure out how to eliminate your opponents before you were eliminated.

The Bad:
Not sure there is anything bad here. It might be a bit light for some gamers, but not all games are for all gamers.

Final Thoughts:
This is a delightful quick filler game that should make it into your collection. It will be in mine!

Players Who Like:
Quick light card games that can be played anywhere like Oddball Äeronauts, Love Letter, and Fluxx will love Gnomi!!!

I am giving Gnomi 8 out of 10 super meeples.
Check out Gnomi on:
BoardGameGeek.com
PoppyJasperGames.com
Get your copy of Gnomi at Kickstarter.com