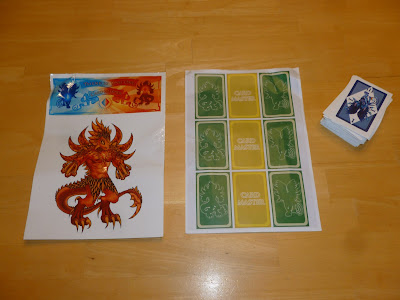 WARNING: This is a preview of Card Master. All components and rules are prototype and subject to change.

As I have mentioned in previous reviews I like games for so many different reasons one of which is that they can be used as an educational tool. I love the fact that my kids can learn and grow while playing a game. It doesn’t have to be Aerospace Engineering or Neuroscience, just something that teaches a concept and makes them think.

Card Master just so happens to be one of those games. Let’s see how it shapes up. 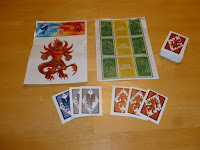 To set up Card Master players place the playing mat in the center of play, then shuffle the cards dealing five cards to each player placing the remaining cards to the side. Each card is double sided with one side being blue and the other red. Each player will choose a color to play and flip their hand to that color.

Once set up is complete players will choose who will go first and the game is ready to begin. The object of the game is to have the most cards showing your color (red or blue) by the end of the game.

To do that on a players turn she will take one card from her hand and play it onto one of the empty spots on the 3×3 playing mat—with her color face up—in attempt to capture her opponents card. Note players will not draw any new cards, the ones dealt at the beginning of the game are all they will use. Cards are always played with the current players color face up and with the cards always orientated the same direction as the others (IE all the card bottoms are facing the same direction).

There are four ways to place a card to capture an opponents card which are described below. The designer recommends playing one rule at a time then combining some or all after mastering them.

Play continues until all the spots have been claimed at which point the game ends and the player with the most cards in his or her color wins. This includes both the cards on the playing mat and in a player’s hand.

Artwork and Components (6/10):
As I mentioned at the beginning of this review all of the components are prototype so it is hard to know how the final product will turn out. That being said the illustrations and card layouts are very well done. I am hoping the final version of Card Master uses high quality materials to really show off the great artwork.

Rules and Setup (7/10):
Setup is a breeze and only takes a minute or so to do. The rules are fairly straight forward and easy to understand. I imagine the final version will iron out some of the rougher edges helping to clarify certain circumstances.

Card Master was easy to teach to others using the one rule at a time method. I was easily able to teach my 7 and 9 year old how to play to the point they can play by themselves.

Theme and Mechanics (7/10):
Card Master—by admission of the designer—was originally an educational tool to help his class learn math. As such it is by all accounts an abstract game, meaning that any theme could be pasted on and the game would still function the same. For example puppies and kittens could have been used as opposed to the flying blue tiger and walking mutated lizard. I am happy to see the latter was chosen.

Mechanically the game is smooth. It doesn’t get much easier than just placing a card on your turn, however deciding where to place that card based on the chosen rule set adds some good depth.

Game Play (8/10):
Game play is quick allowing multiple games to be played over a short amount of time. I was able to play through each rule set with my boys and still finish in under 30 minutes.

The Good:
Card Master is quick to learn, easy to play, and easy to teach others. It helps kids learn basic math skills such as greater than, less than, equal to, and simple addition. The illustrations are wonderful and definitely draw you in.

The Bad:
I have a hard time seeing this one hitting the table often. Once you have mastered the four rules the re-playability (I know it isn’t a word, but should be) is pretty low as the game never really changes from one play to the next. If more capture rules, special power cards, or player powers could be introduced I think I would want to play it more.

Final Thoughts:
Overall I liked the game as an educational tool. I also really liked how accessible it was for my boys. I would like to see some more variety in the cards for the final print run to bring me back to the table.

Players Who Like:
Players who like educational games, strategic/tactical games, and cool artwork will love Card Master.

I am giving Card Master 7 out of 10 super meeples.
Check out Card Master on Kickstarter.com.