The Ultimate sci-fi board game—Parsec – Age Of Colonies—is a unusual 4x with a mix of resource management and fleet space combat, using dice rolls and card decks. 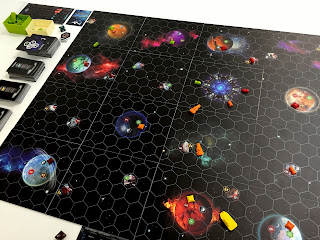 Scifi themed board games are usually very complex, somehow cluttered by dozens of parts used to represent almost anything. In Parsec – Age Of Colonies this is not true, the game is very simple and easy to learn. All the technology has been moved onto the cards. The cards decide your faction, the faction (almost) decides your strategy. Cards are divided in four classes (strategic, natural, bonus and permanent) and are constantly flowing through players that can buy, use, steal or sell them in order to achieve specific goals. This approach, along with dice rolling, the modular board and the factions randomness, adds virtually endless replay value. Players can bind alliances on the fly to combat against other players when they are too close to victory, but without knowing the enemy’s card deck it will be a difficult task. Parsec – Age Of Colonies is much more deeper than it looks at a first glance. 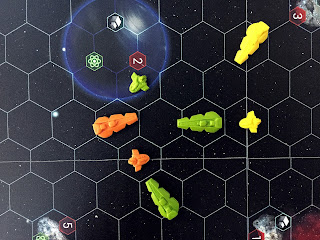 In Parsec – Age Of Colonies you can achieve victory in different ways: taking control of space economic system, colonizing most of the planets or crushing your enemies one by one with your war fleet.

The game will be released fully translated in english and italian.

Check out the Parsec – Age Of Colonies Kickstarter Campaign by clicking this LINK or the image below.