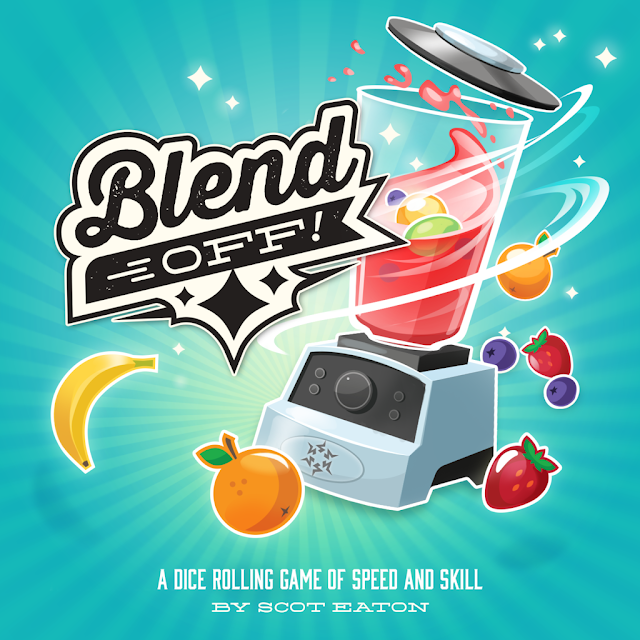 Every morning I spend a half hour making “fruity drinks” or smoothies for my four boys. Spinach, Kale, Apples, Bananas, Strawberries, and more. It becomes a game to see what different combinations I can come up that will still taste good. Some days are good and some are not.

In Blend Off players take on the role of a Mix Master working with the famed Smoothie Queen Becca and her runner boy Kevin to quickly make smoothies for a bus full of volleyball players. The winner will get a month of free smoothies for themselves. 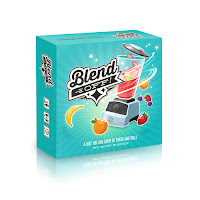 Set up by giving each player one fruit die, one reference/spill card, and two blender cards in the color of their choice. Next place fruit tokens of each color equal to the number of players plus two and the black Durian cube in the center of play. Create the order deck by setting aside all the orange order cards plus all the order cards of the same color as each player’s blender cards. Remove the rest of the cards from the game then shuffle the order deck and place it face down in the center of play. Lastly create the first set of orders by drawing and placing face up on the table order cards equal to the number of players plus one. If a special order card is drawn place it on the table then place a regular order over the top still displaying the special order on the card below.

Once set up is complete players count down “Ready, Set, Blend!” and the game begins.

There are no turns in Blend Off, each player plays at the same time. There are four actions a player can choose to preform at any time:

If at any time you roll a fruit that there are no tokens left for you may take the black Durian fruit token. This token may then be placed on another player’s blender who must then dump their blender.
Spill cards can be used once per game to force all other players to dump their blenders. This is a good variant when playing with younger kids that are having a hard time keeping up.
The game ends when the last order card has been fulfilled. Players then count up the stars on all their order cards and the player with the most stars win!
There are a few variants to the game which includes “The Race”, “The Ultimate Showdown” and “Blend Off Jr.”.

I have only played the Jr version where players take turns rolling all four dice setting aside ingredients they want and re-rolling (one time) those they don’t. A player must have two dice of one ingredient in order to collect it. Once a player can claim an order card they do so with a new order card taking it’s place.

In “The Race” players have their own fruit and their own orders to work with. Game play is similar to the regular game except players are only working on their orders. The first one done with all their orders wins! Finally in “The Ultimate Showdown” two players play “The Race” version but with two colors of order cards each so the game last longer.
That is how you play now here are my thoughts.

Theme:
As a daily connoisseur of smoothies it was easy to get into this theme. The mechanics which I will discuss below work very well with the theme and make you feel like you are really working in a high pressure smoothie joint. Watching the board game industry for the past several years I am not sure this theme will appeal to the masses, however I for one am glad to see something different than dungeons, zombies, and pirates.

Mechanics:
Rolling dice, collecting fruit tokens to match order cards—sounds simple right? Well maybe not, throw in the fact you are racing the other players and even the simplest of task can become difficult.

The artwork is minimal yet vibrant and fun. It really ties the theme and mechanics together to create a tight and fun game. 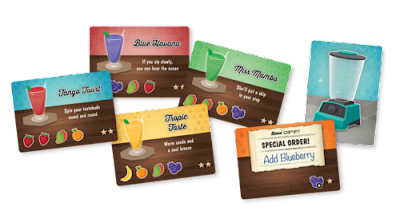 The Good:
Blend Off is easy to learn, quick to teach and fun to play. It works well with two, three, or four players and is fun for younger kids and adults alike. The fast paced nature of the game pulls me in again and again.

The Bad:
My one complaint would be the game tends to drag a little long at times. This may be due to the group, but can be easily fixed by using less order cards. One might worry that smaller children would have a difficult time playing, however the Jr variant eliminates that problem.

Final Thoughts:
Blend Off! is great, it is a perfect filler game with you usual gaming group or for a family game night. Small enough to fit in most backpacks, you can take it anywhere to play. Another hit for Thunderworks Games!

I am giving Blend Off! 4 out of 5 super meeples.

Please check out Thunderworks Games Kickstarter campaign for Blend Off.