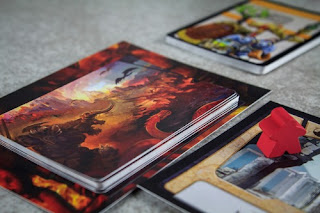 In this fast-paced game, players will scramble between various regions outside their Capital City fighting off enemy hordes! Each region will offers unique properties that players must calculate into their strategy. 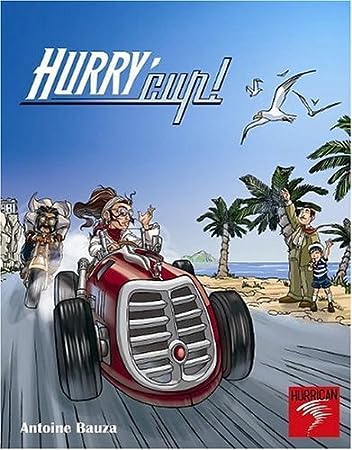 From BGG:
“Drivers from all over Europe have arrived and are lined up on the starting line. Consisting of narrow and winding roads, the track is filled with dangers and promises a tricky race. As one of the fastest and fearless pilots in the race, you will try to pass the finish line before your opponents by being the quickest at spotting and grabbing the die which will allow you to move forward.

Hurry’Cup is a car racing game where 3 to 6 players face off on tracks that are always different from one game to the next; as decided by the players themselves. Reflexes, dexterity, and risk-taking are the key to stepping first on the podium. It is a tile game with pavement-burning ambiance. Made up of 36 modular tiles, the Hurry’Cup race track offers many game possibilities, making it a new game each time. Hurry’Cup is a game with simple rules and Fast and Furious Fun.”. 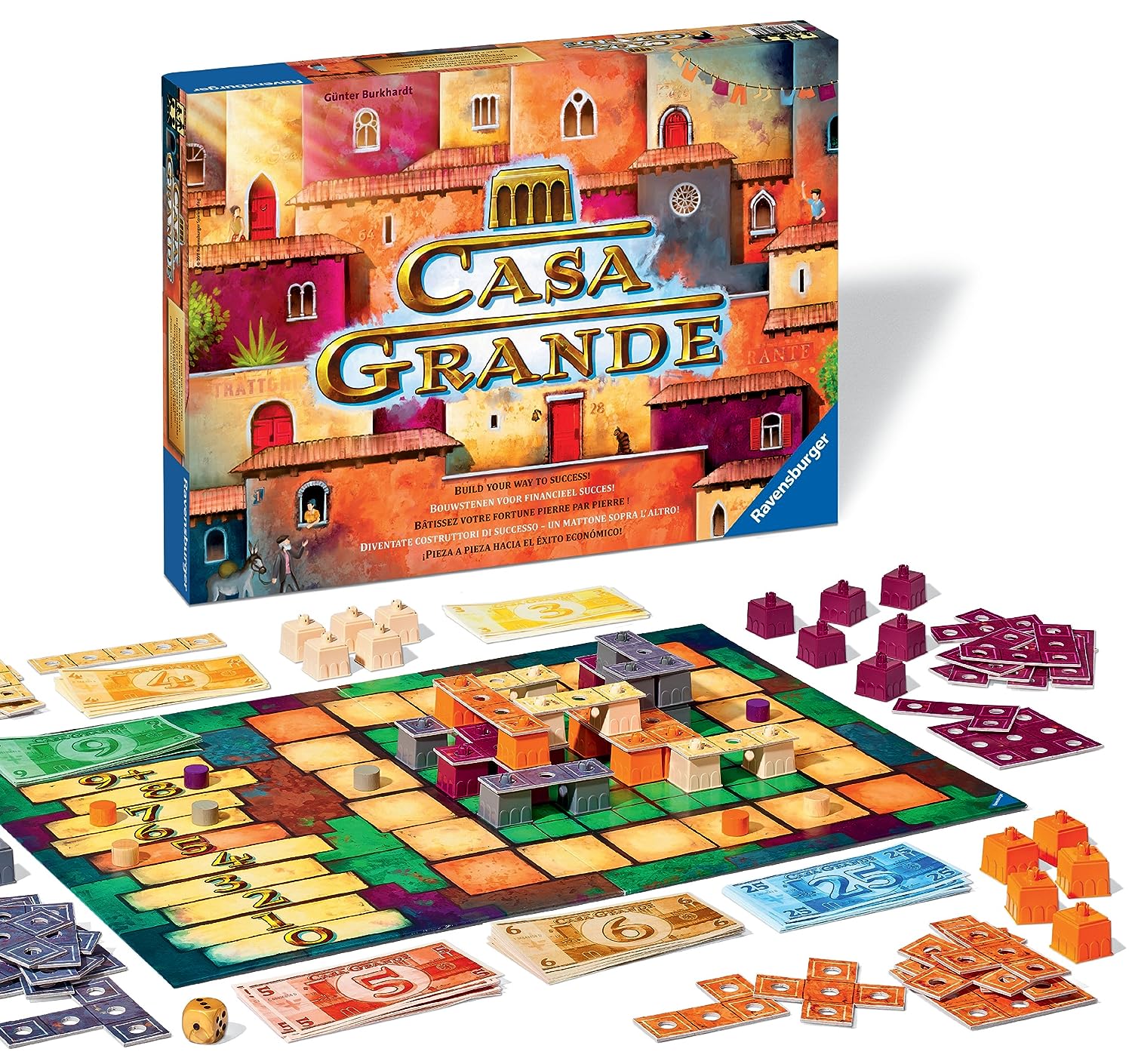 From BGG:
“In Casa Grande players try to develop well-located building lots in order to construct large and tall buildings on them. Opponents can use your buildings for their own purposes, and the final result should be one large magnificant house – “casa grande” – after another.

Casa Grande is played on a game board that shows a square grid for the building area, which is framed by a track. At the start of the game, each player receives a number of building blocks and differently-shaped platforms. Each player also receives five bonus points and one pawn, which is placed on the track.

The game is played in turns with some elements being similar to Burkhardt’s own Kupferkessel Co. At the start of his turn, the player rolls the die and moves his pawn forward on the track as many spaces as the number rolled. By expending bonus points, the player may move his pawn further. Then, the player must place one building block on the board in the column or row corresponding to the space on the track where his pawn is located. If he now has the building blocks needed to support one of his platforms, he may place that platform on top of the building blocks. If he does so, he gains an amount of money (Casa Grande Lire) based on the size of the platform and the level at which it was built.

After a platform has been added, building blocks may be added on top of the platform. If another player builds on top of your platform, you gain a number of bonus points. You also gain bonus points if your pawn ends its move on a corner (in which you don’t get to place a building block). If a player accumulates nine or more bonus points, he receives nine Casa Grande Lire, but loses the bonus points.

The game ends at the end of the round in which a player has placed his last building block. The player who has collected the most money wins.”. 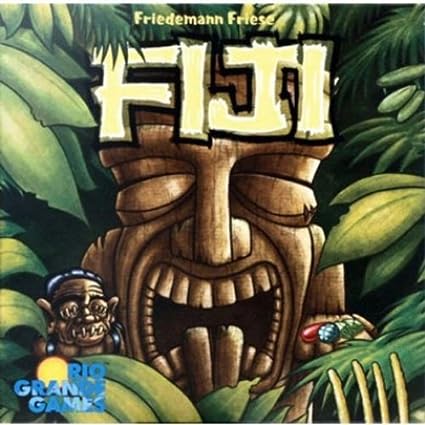 Rivers, Roads And Rails – 39% Off!
Got this one for the kids this year! 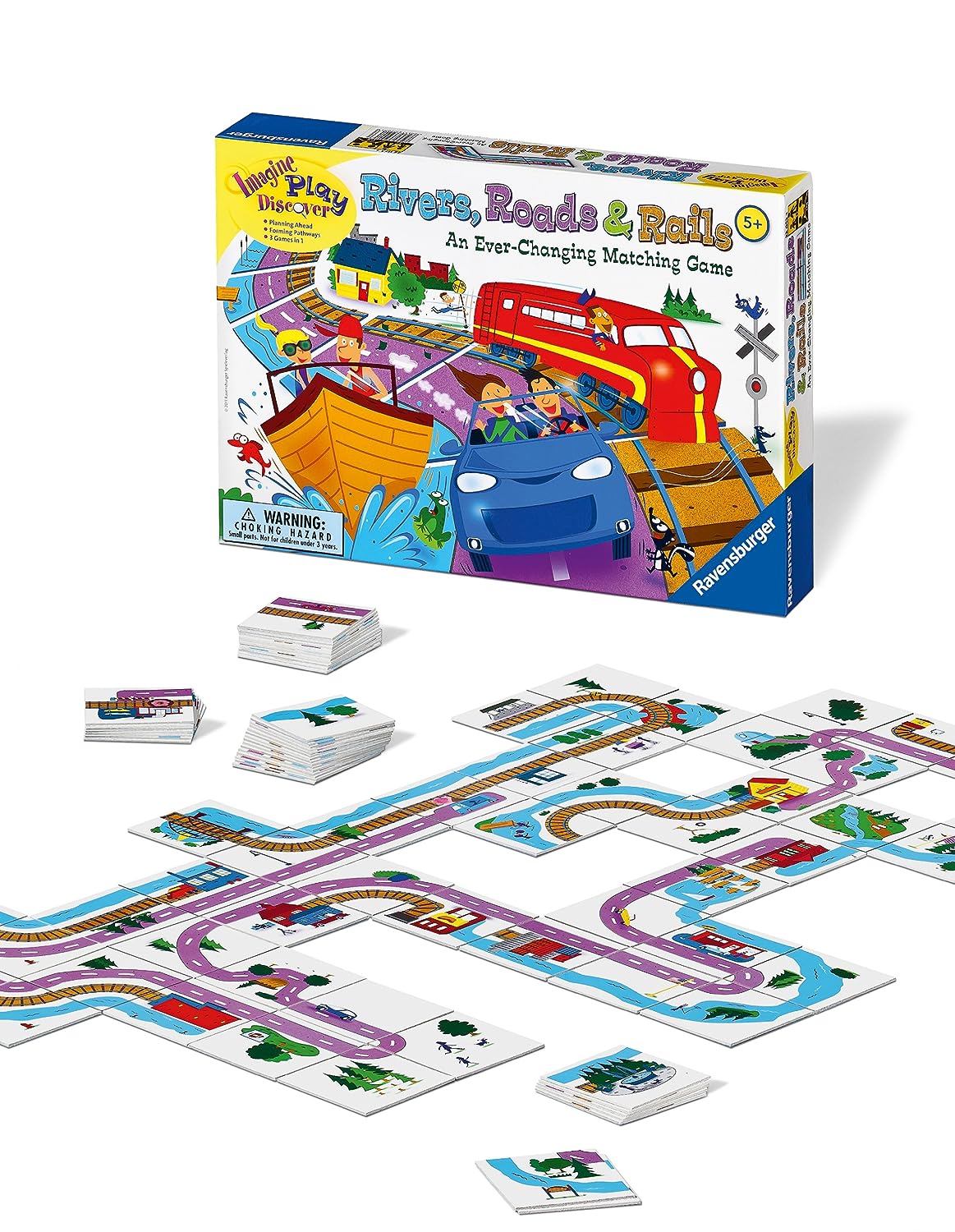 From BGG:
“This matching game is a close relative of Dominoes. Each tile has two sides, and each side contains at most one road, one river, and one rail. You can only play a new tile adjacent to a played tile if the sides match. The act of playing tiles creates a map of an intricate twisting transportation network. The tile illustrations are very pleasing to both young and old alike. Only two of the tiles are branching, so the game is mostly played at both ends of the tiles already laid down.”. 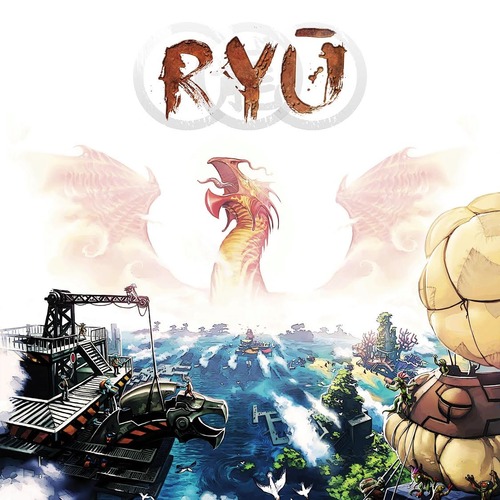 From BGG:
“In a galaxy far far away, there is a planetary system composed of a great big sun and nine minor planets, four of which have been developed as mercantile planets more or less under the control of politicians and guilds. On each of these planets are a merchant guild, a guild of smugglers, a bazaar and the galactic government, and players can take special actions on each of these planets.

In RYŪ, a game of negotiation, bluffing and cube-drafting, players each represent one of the other five planets in this star system, with each planet having a different type of humanoid – such as sharks, amazons and meka goblins – and its own unique influences. These planets are open to prospecting, and with the proper financing players will be able to dig the resources they need to build their own RYŪ, a mother ship composed of “Rare Metal”, “Memory Stone”, and “Amber Magic”. Players will need to cooperate with one another to raise the necessary resources, but they must also work for themselves in order to maintain an advantage over other players. Once assembled, the RYŪ comes to life as a living spaceship, and its owner wins the game.”. 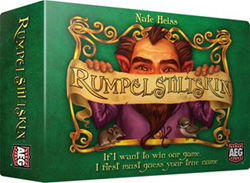 From BGG:
“In Rumpelstiltskin, you and a friend take the roles of fey folk who have decided to engage in a name guessing contest. You must use your magical mischief to learn your opponent’s secret name while protecting your own!

From BGG:
“For Sale is a quick, fun game nominally about buying and selling real estate. During the game’s two distinct phases, players first bid for several buildings then, after all buildings have been bought, sell the buildings for the greatest profit possible”.

From BGG:
“Wanderers from afar bring tales of the strange and powerful in distant lands. Set out to find lost heroes, creatures, and cities as you build your kingdom in this first expansion to Eight-Minute Empire: Legends! Eight-Minute Empire: Lost Lands adds even more variety and depth to the game”.