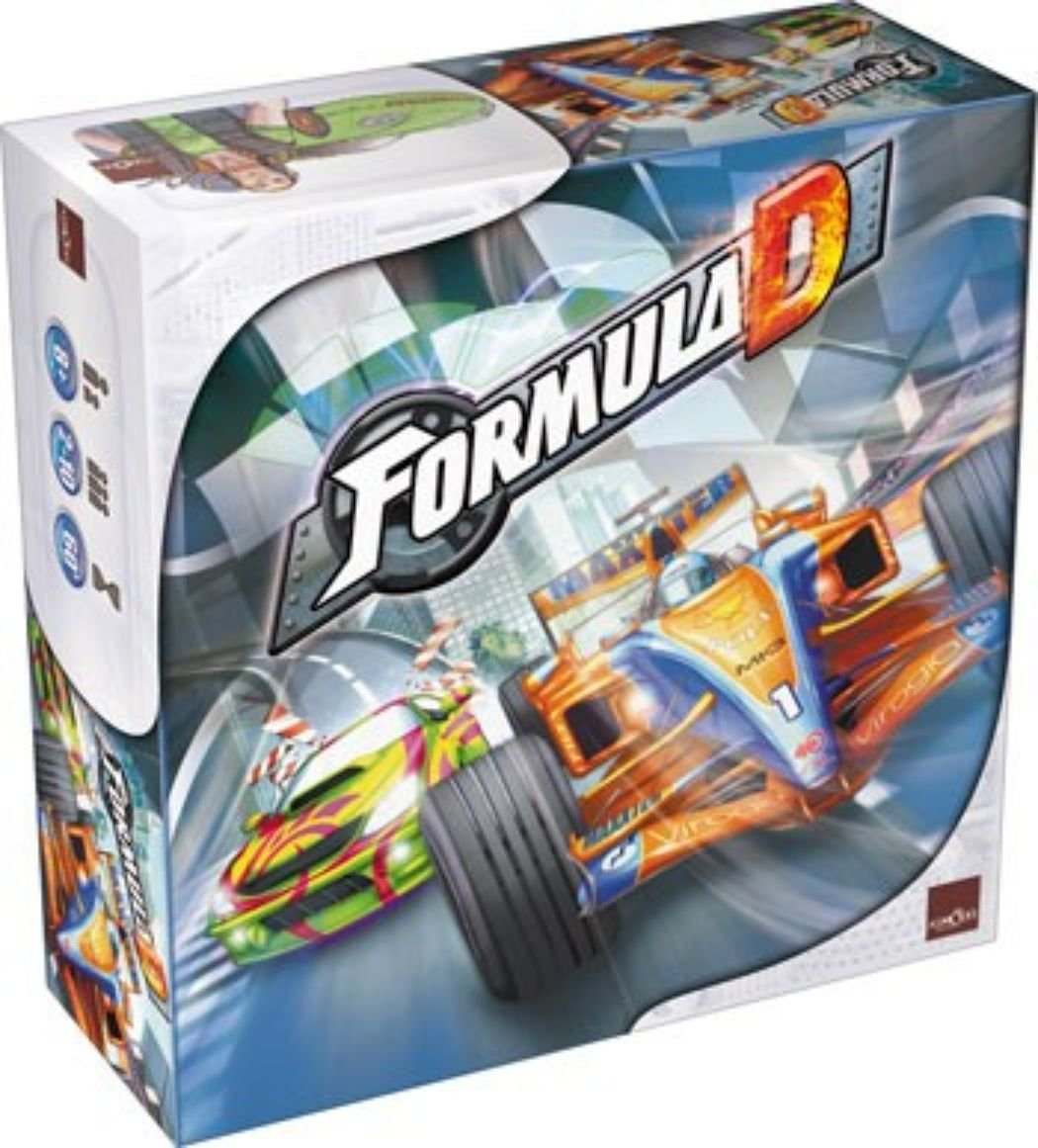 From BGG:
“Formula D is a high stakes Formula One type racing game where the players race simulated cars with the hope of crossing the finish line first. This is a re-release of Formula Dé with several changes from the original format. Whilst old tracks can be used with the updated Formula D rules, the new game features boards that have an F1 track and a Street Track on the other side. These street tracks each have a novel inclusion or two to add greater theme –

The game mechanisms are a simple race, get to the finish line first! However, players have to use a significant amount of planning, and rely on quite a bit of luck. Each player manages when to shift gears, with each gear providing a different speed.” 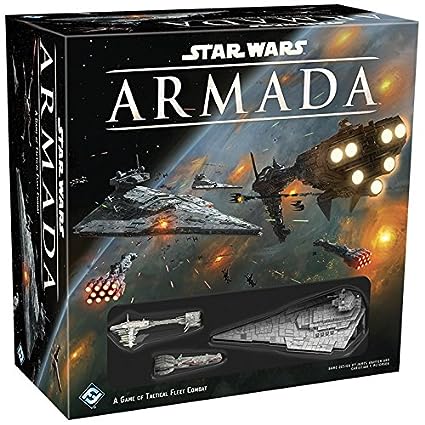 From BGG:
“Massive Star Destroyers fly to battle against Rebel corvettes and frigates. Banks of turbolasers unleash torrential volleys of fire against squadrons of X-wing and TIEs. Engineering teams race to route additional power to failing shields. Laser blasts and explosions flare across the battlefield. Even a single ship can change the tide of battle.

Capital ships are extremely powerful war machines, but they’re also massive and sophisticated vessels that can’t swiftly react to every development in the heat of battle. Accordingly, the key to flying these vessels effectively is learning how to plan ahead. You want to issue your commands in such a way that your crews will be ready to execute them at just the right times.

Each of your pre-painted capital ships has a command value, which determines how many commands it will have in its stack at any given point in time. During setup, you secretly build your initial command stack, selecting from any of four different commands, each of which provides a different advantage. Once you have locked your selections, you place the commands in your stack in the order of your choice. Then, during each round of game play, you secretly select and assign a new command to your ship, placing it at the bottom of your command stack, before you reveal the command at the top of your stack and gain its benefits.” 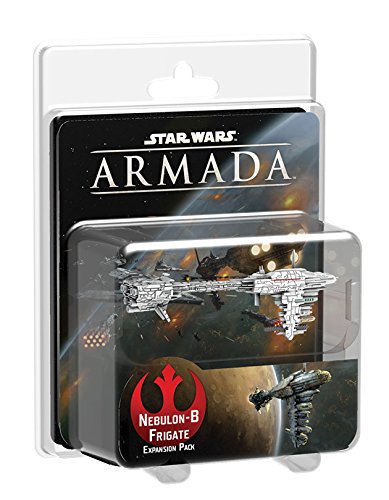 From BGG:
“The Nebulon-B frigate was designed for the Imperial Navy by Kuat Drive Yards as a warship that could protect convoys from Rebel starfighters, but it was, ironically, a much more impactful ship within the Rebel fleet. At three-hundred meters long, a single Nebulon-B could boast twelve turbolasters and twelve laser cannons.

The showpiece of the Nebulon-B Frigate Expansion Pack is its detailed and pre-painted Nebulon-B frigate miniature, and the expansion then enhances this ship by supplying all the command dials and tokens you need to fly it, along with ship cards that allow you to build it into your fleet as a fighter escort or as a powerful support ship. Additionally, the expansion’s eight upgrade cards, which include two unique title cards, allow you to further customize your frigate’s role within your fleet.” 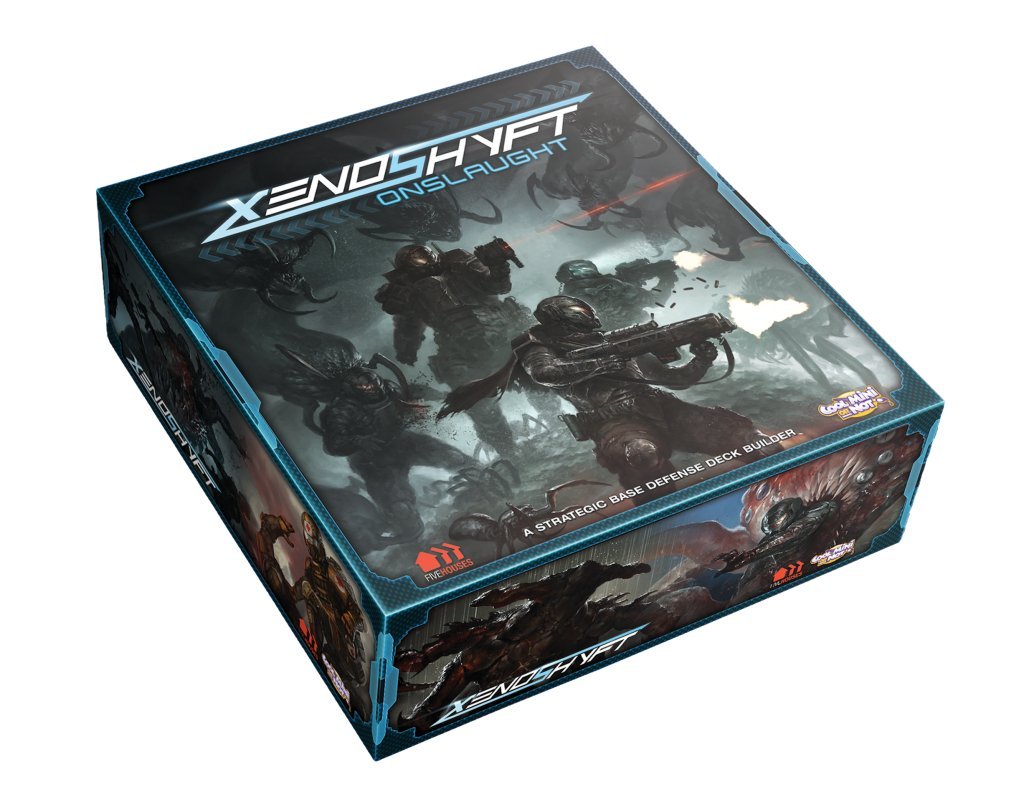 From BGG:
“In XenoShyft: Onslaught, a strategic base defense deck-builder, players take on the role of the NorTec Military, charged with defending their base against the onslaught of the alien “Hive”.

XenoShyft: Onslaught combines classic deck-building and resource management with fast-paced combat and unique “base defense” elements. As the game progresses, each player builds up their deck of Troop, Equipment, and Item cards, which they will in turn use to defend the base against incoming enemies in deadly combat.

It is up to the players to work together in order to outlast the horrors awaiting them by coordinating strategy, utilizing the strengths of their unique divisions (Med Bay, Weapons Research, Science Lab, and Armory), and organizing defense tactics to ensure no player is caught off-guard by surprise attacks.

XenoShyft: Onslaught is a game of tactical decisions and survival horror — and survival is never guaranteed.” 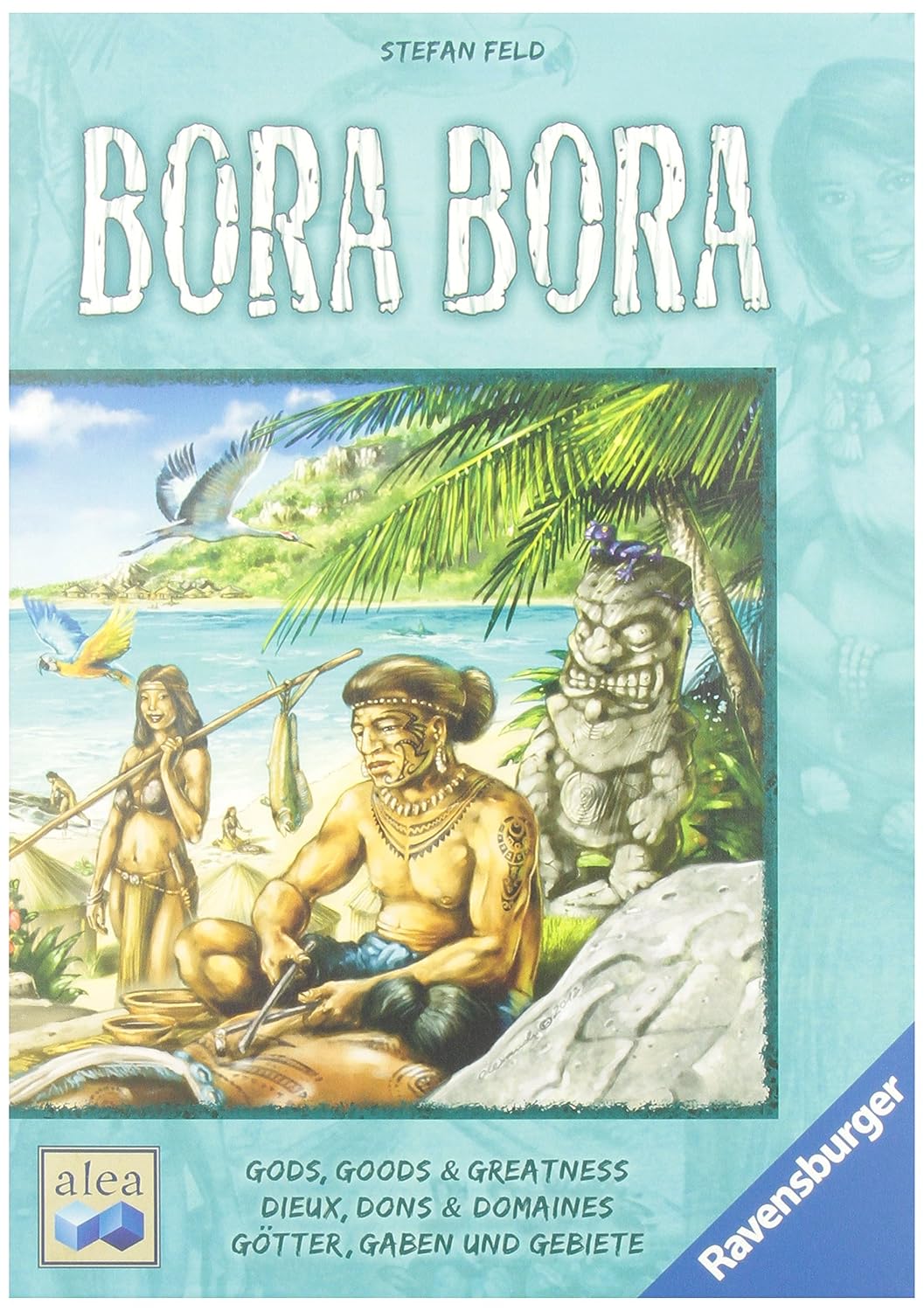 From BGG:
“Stake your fortunes in the mysterious island world of Bora Bora. Journey across islands, building huts where the resilient men and women of your tribes can settle, discovering fishing grounds and collecting shells. Send priests to the temples, and gather offerings to curry favor with the gods.

In Bora Bora, players use dice to perform a variety of actions using careful insight and tactical planning. The heart of the game is its action resolution system in which 5-7 actions are available each round, the exact number depending on the number of players. Each player rolls three dice at the start of the round, then they take turns placing one die at a time on one action. Place a high number on an action, and you’ll generally get a better version of that action: more places to build, more choices of people to take, better positioning on the temple track, and so on. Place a low number and you’ll get a worse action – but you’ll possibly block other players from taking the action at all as in order to take an action you must place a die on it with a lower number than any die already on the action.

Three task tiles on a player’s individual game board provide some direction as to what he might want to do, while god tiles allow for special actions and rule-breaking, as gods are wont to do. The player who best watches how the game develops and uses the most effective strategy will prevail.” 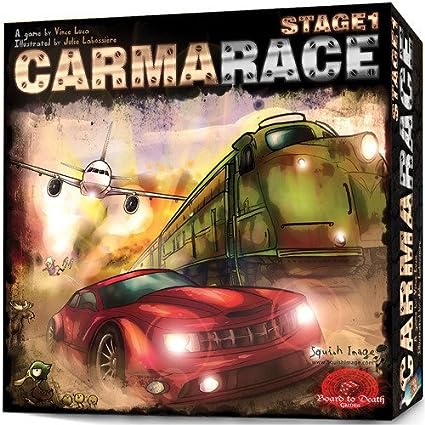 From BGG:
“In Carma race, players take on the role of…well… themselves. You’ve just received an email from your favorite convention, promising you a free autographed limited edition item of you choice, but only IF you get there before the other players, who’ve also received the same email. The problem? You don’t have a car, but as karma has it, neither do the others.

You must hitchhike your way there using planes, trains and automobiles… and the occasional bike from the thrift shop. Hey… it was 99 cents! On this journey through the continent, you’ll hop into cars equipped with NOZ, turbos, and furry dice. You’ll encounter some crazy drivers who might occasionally be drunk and take risky jumps just for the hell of it. You’ll wish for awesome upgrades to your lift, but the others are wishing just the opposite.

On your turn, they’ll be praying evil things upon you. Whatever they can think of to hinder your speed. They’ll throw old ladies and moose if they have to. They’ll send birds in your engine or just simply wish for you to crash and burn. But don’t worry, their turn will come and vengeance will be sweet.

You’ll have to strategically manage your limited hand size and choose which deck to draw from. Will you draw transportation cards to hopefully get the best ride in the game? Or will you draw some karma cards to boost your current ride and slow the others down. While on this awesome road trip, you’ll have to choose your path, or let the driver take you further on his own path. The GPS will determine this. You’ll have to stop at train crossings and travel through snowy hills, sandy deserts, big cities and farmland.

The race also has two levels of play. You can play the regular way, which is with the special ability text of the cards, or the Junior way. In the junior level, simply play without the text and use only the numbers. This will help young players learn simple math, strategy, and have fun while doing so.

But just when you thought the race was over, there’s more to come… expansions with new maps, more vehicles, more upgrades and of course…more mayhem are already in the works. Why do you think we put STAGE 1 on the box? So pack light, head out there, and hope for the best!” 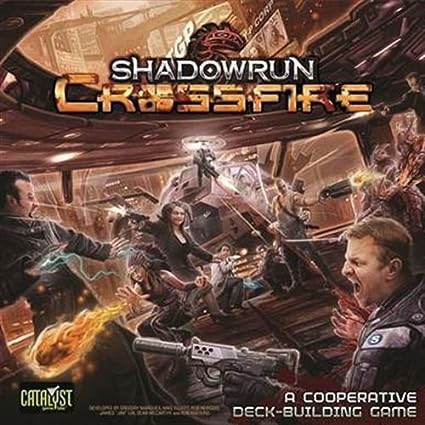 From BGG:
“The shadows of the Sixth World have every kind of danger you can imagine: ultra-violent gangers, flesh-eating ghouls, mages that summon spirits from toxic waste, backstabbing corporate raiders, hard-nosed police officers, and even dragons. You don’t have much — mainly your guts, your wits, and your friends — but maybe that’s enough. Between you and your teammates, you can sling spells, hack the Matrix, talk a tiger out of his stripes, and bring down a charging ork from a hundred yards away. Will that be enough to face down the worst the mean streets can throw at you? You’re about to find out.

Shadowrun: Crossfire is a cooperative deck-building card game for two to four players set in the gritty, cyberpunk fantasy world of Shadowrun. Play a shadowrunner team and take on tough jobs such as protecting a client who’s marked for death, shooting your way out of downtown when a run goes sour, or facing down a dragon. In each game you’ll improve your deck with a mix of strategies, while earning Karma to give your character cyber upgrades, physical augmentations, magical initiations, weapons training and Edge.

From BGG:
“Where there were once six realms, now only a single remains: New Vigil. In Ascension: Dawn of Champions, you take on the role of your faction’s Champion to guide them to victory in this world of new alliances and ancient foes.

New Champion cards let you play as a faction leader, building your reputation to unlock powerful cards and effects. This set also includes new multifaction cards to acquire and defeat, including Constructs and Monster!

From BGG:
“The year is 1886 in a small forgettable hovel of a town on the border of nowhere. Several unscrupulous individuals come together for a hand of poker over a pile of cash. A whispered accusation of chicanery crosses the table and irons are yanked from holsters. The sparse crowd dives for cover and lead arcs towards flesh, the saloon aching for a fresh coat of crimson.

A Fistful of Dinero, the first game published by Magic House Games, is a card game for 3-6 players set in the wild west. After a poker game goes terribly wrong, players draw their weapons, make a quick grab for the cash, throw chairs, dive for cover, and do everything they can to be the richest gunslinger — or just the last man standing…

At the start of a round, players draft cards and place (program) them in one of three slots. Then in player order, players reveal the first slot and take one of the two available actions. Players can fire their weapons, hide beyond cover, switch weapons, grab money, etc. Players also have the opportunity to “throw” chairs or other items (cards) onto an opponent’s player board to do additional damage.

The game ends in two ways: If a player takes five points of damage, he’s dead and out of the game, with the last man (or woman!) standing winning it all. Alternatively, if the pot of dinero ever runs out, the richest outlaw wins.