Pandemic State of Emergency – 35% Off! 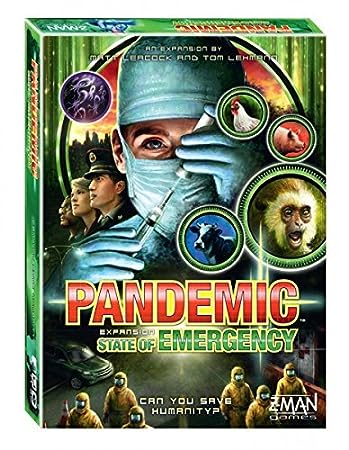 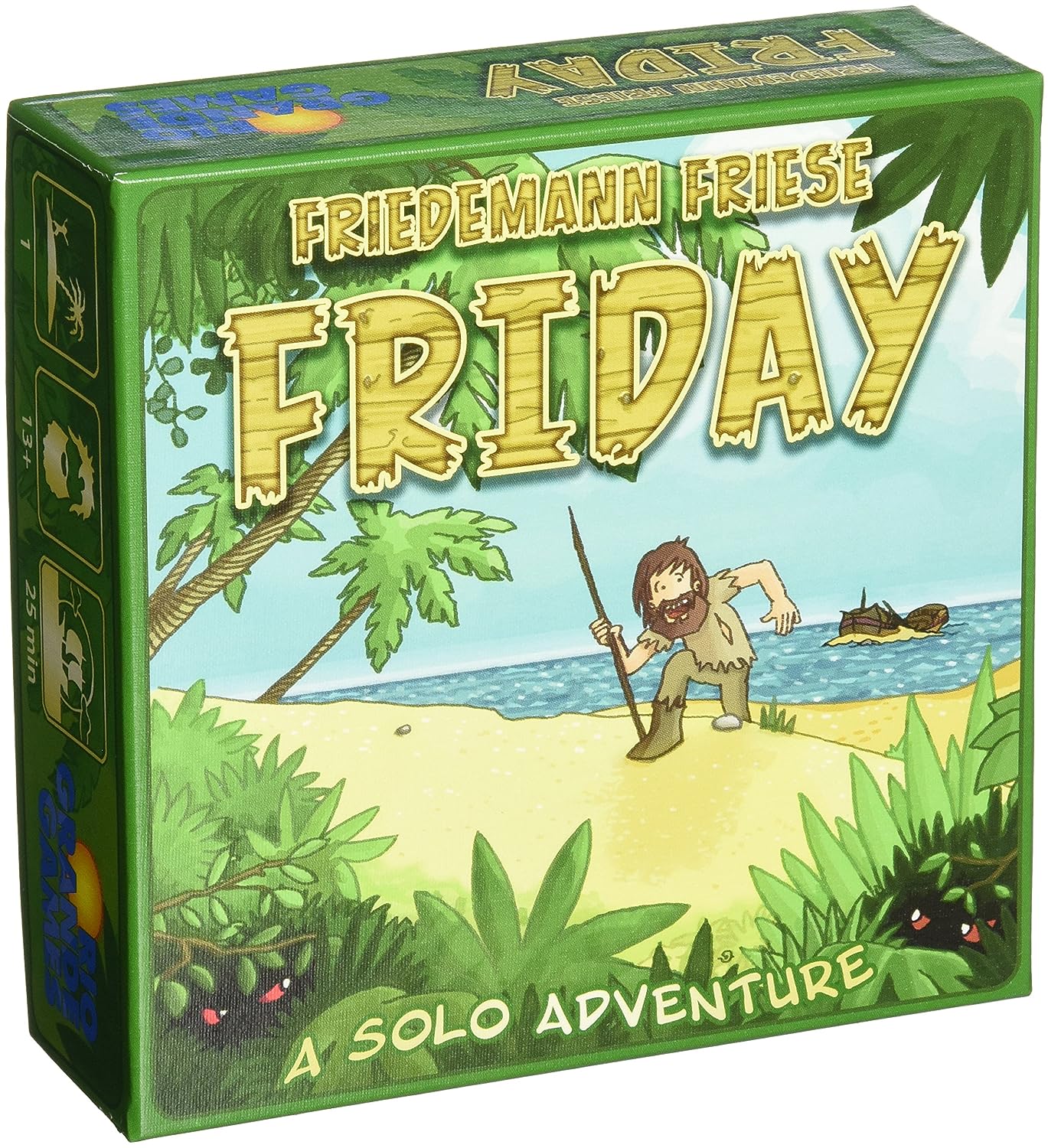 From BGG:
“Friday, the second game in the Friedemann Friese Freitag-Project, is about Robinson Crusoe and Friday (Freitag). You play as Friday and must help Robinson Crusoe survive the island and prepare him to defeat the pirates. 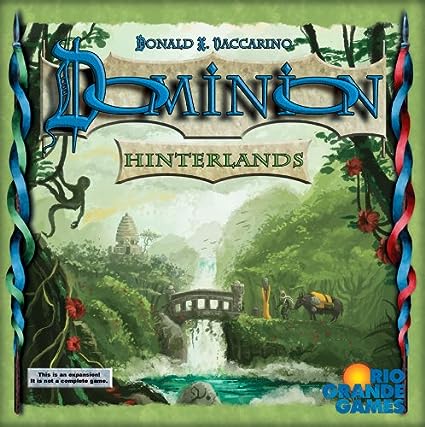 Dominion: Hinterlands is the sixth addition to the game of Dominion. It adds 26 new Kingdom cards to Dominion, including 20 Actions, 3 Treasures, 3 Victory cards, and 3 Reactions. The central theme is cards that do something immediately when you buy them or gain them.” 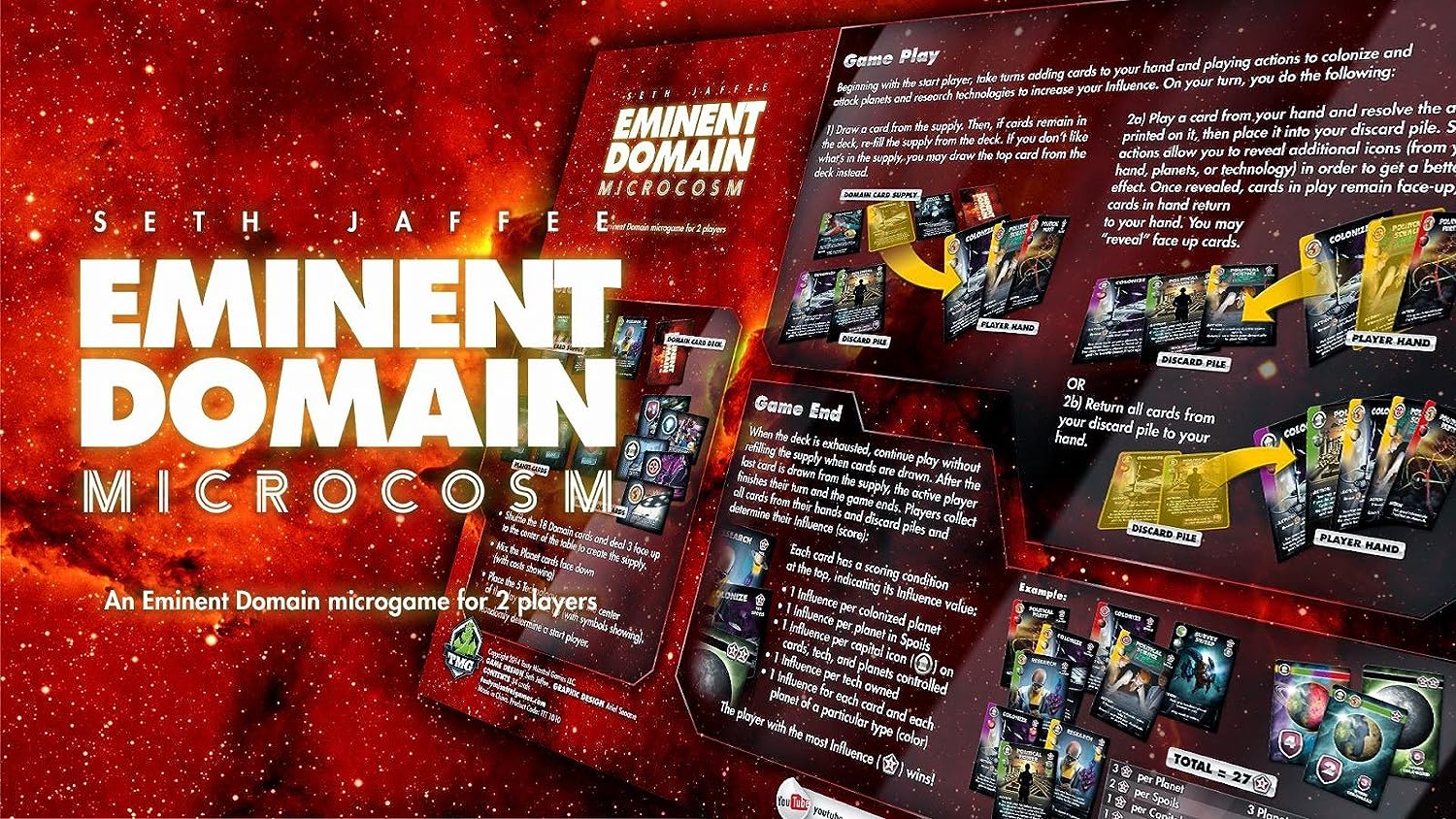 From BGG:
“The galaxy just got a whole lot smaller…

Two mighty empires are about to collide. Play your cards right and become the ultimate ruler of this microcosm!

Eminent Domain: Microcosm is a quick-playing two-player card game which brings you all the thrill of building a space empire in just 15-20 minutes. Each turn you take a card into your hand from the supply, then you either play a card and carry out its instructions, or pick up your discard pile to refill your hand. Each card also has a scoring condition on it, and to win you’ll want to maximize those conditions.

As in the grandfather game Eminent Domain, actions you take can be “boosted” by revealing other cards sharing the same icon. Colonize and attack planets, do research, and take advantage of politics to score the most influence by the end of the game!”

From BGG:
“Kings of Artifice is a strategy board game for 2 to 4 players. The game is played in a series of building rounds, followed by one final crowning round. Victory Points (VP) are awarded for building structures during the game as well as at the end. In each game, two special scoring cards are drawn from a deck that allow players to gain bonus points by meeting certain conditions.

In the building rounds, the players summon their specialized characters onto the game board and employ them (using Action Points) to construct valuable structures such as Walls, Houses, Battlements, Towers, Palaces, Fountains, and Pastures. These are built from their supplies of colored building blocks. In addition to expanding their own kingdoms, the players can use their forces to hinder the progress of their rivals.

In the crowning round, the players display their completed kingdoms and flaunt their power over the realm. The player with the most Victory Points at the end of the game is the winner!” 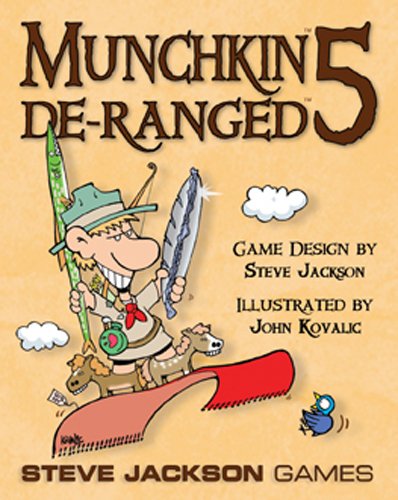 From BGG:
“More of the twisted humor of Steve Jackson and John Kovalic in a 112-card supplement for Munchkin!

De-Ranged has everything you love about Munchkin, including:

Munchkin 5 — De-Ranged. All the munchkin-ism of a prestige class, with none of that annoying roleplaying stuff.” 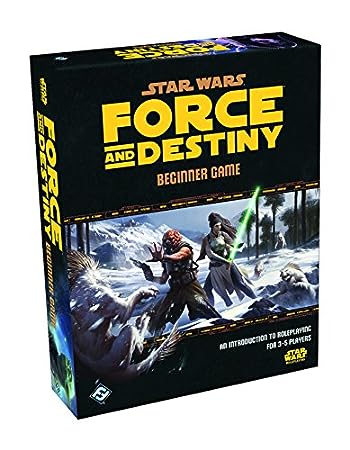 The Star Wars: Force and Destiny TM Beginner Game is the perfect entry into the Star Wars: Force and Destiny roleplaying experience for aspiring Jedi of all skill levels. With its complete, learn-as-you-go adventure, players can open the box, ignite their lightsabers, and explore their destinies as Force users in the Star Wars galaxy. Pre-generated character folios keep the rules right at your fingertips, while custom dice and an exciting narrative gameplay system advance your story with every roll.

From BGG:
“Abraca…what? is a family game of deduction and spellcasting. On your turn, you try to cast one of the spells you have in front of you — but it’s harder than it looks because only the other players can see which spells are available to you! So with cunning wit, clever logic, and a little luck, you have to determine which spells to use against your competitors. Watch your magic words, though, because if you try to cast the wrong spell too often, you’ll lose the game!”

From BGG:
“Orcs Orcs Orcs is a game for two to four players that combines two excellent game mechanics that have not been paired before (deck building and tower defense) and has players casting spells, squashing orcs and rolling up the score in the Orc Squash Tournament.

The mages start the game on top of the tower in the middle of the battlefield. The battlefield consists of six lanes, each with three sectors, radiating out from the tower. On these lanes the orcish hordes will try to charge all the way towards the tower. Your job is to defeat them before they can reach you.

At the beginning of each game round players draw a fate card, which will determine which category of creatures will advance one sector towards the tower and sometimes implement a nasty rule change for that particular game round. There are three categories of orcs which differ in strength and special abilities that are conveyed to a player once an orc is defeafed.

The game ends when on four lanes you run out of orcs. During the final scoring players count up their defeated orcs and multiply them by the number on the creature counter, get points for each support spell learned and subtract points for each poison card in their deck. Whoever has the most points will be declared “Master Mage”!”

From BGG:
“Kings of Israel is a board game taking place in Israel (the Northern Kingdom) during the reign of its kings up until Israel’s destruction by Assyria. Players are on a team, with each person representing a line of prophets that are trying to remove evil and idols from Israel, while building altars to help guide Israel in the upcoming difficult years. If the players are able to build enough altars before the game ends, they win. If the game ends by either the team running out of sin cubes or idols, or by Assyria destroying Israel, the prophets lose.

A typical round has four phases:

1. King’s Godliness Phase: During this phase, if a bad king is reigning over Israel, the players must draw a Sin & Punishment card, which means bad things occur in Israel because of evil or in response to evil. If during the reign of a good king, the starting player receives a Blessing card.

2. Sin Increases Phase: Location cards are drawn and sin increases at each revealed location. This can possibly cause idols to appear or sin to spread further if sin increases at a location with an idol.

3. Prophets Work Phase: In this phase each prophet gets to use four actions to accomplish their goals. They may use their actions to move, remove sin or idols, draw resource cards, build an altar, make a sacrifice at an altar, or to give resources to another player. A prophets may also play Blessing cards at this time if they have them. In expert mode, after all the prophets take their turn, the false prophet takes his turn.

4. End of Round Phase: The starting player changes to the next player and the timeline token moves down to the next king chronologically. In easy mode, any player who had made a sacrifice that turn then draws a single Blessing card.

The family version of Kings of Israel is available on the game’s website. This version eliminates the King’s Godliness phase, Abilities, and the Blessing cards, which makes for an easier, quicker, and more simplified game.”