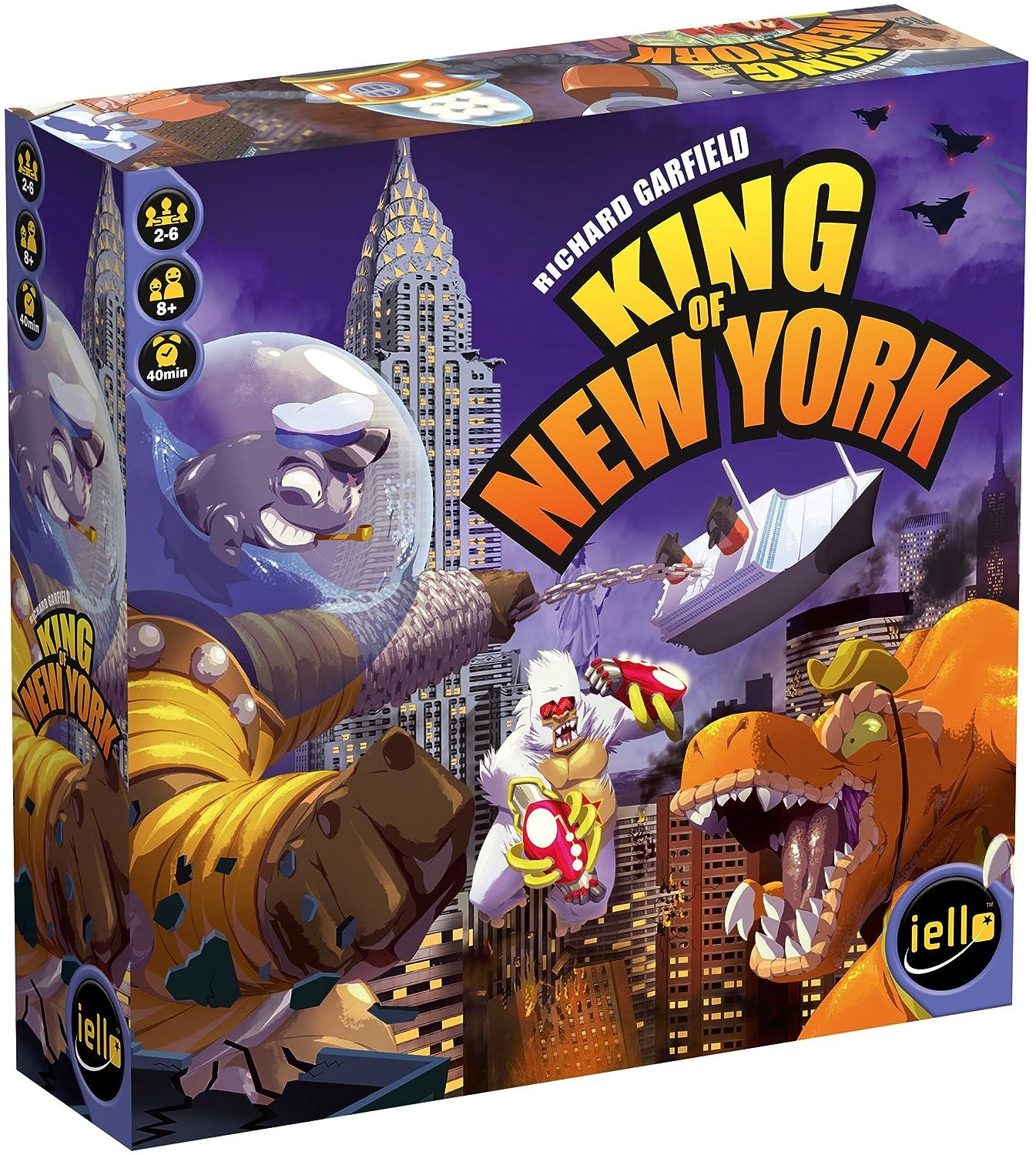 King of New York is a standalone game from designer Richard Garfield that keeps the core ideas of King of Tokyo while introducing new ways to play. As in KoT, your goal is to be the first monster to collect 20 victory points (VPs) or to be the last monster standing. On your turn, you roll six dice up to three times, then carry out the actions on those dice. Claws cause damage to other monsters, hearts heal damage to yourself, and energy is stored up so that you can purchase power cards that provide unique effects not available to anyone else.

What’s new in King of New York is that you can now try to become a star in the big city; more specifically, you can achieve “Fame”, which nets you VPs, but superstar status is fleeting, so enjoy your time in the spotlight.

The game board for King of New York is larger than in KoT with each monster occupying a district in the city and everyone trying to shine in Manhattan. When you attack, you can displace a monster in another district, whether to escape military forces or to find new smashing opportunities. Yes, smashing because you can now destroy buildings and get bonuses for doing so, but the more destruction you cause, the more intense the military response.

The monsters from King of New York can be used in KoT and vice versa, but the power cards are specific to this game.” 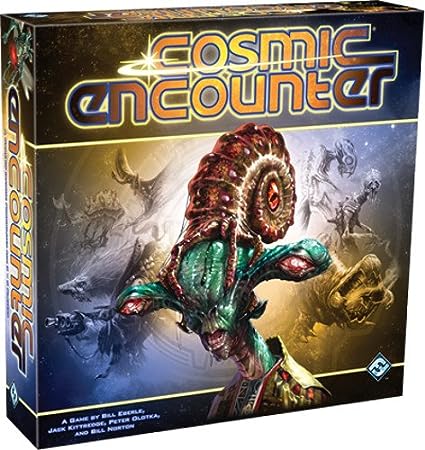 From BGG:
“Build a galactic empire… In the depths of space, the alien races of the Cosmos vie with each other for control of the universe. Alliances form and shift from moment to moment, while cataclysmic battles send starships screaming into the warp. Players choose from dozens of alien races, each with its own unique power to further its efforts to build an empire that spans the galaxy.

Many classic aliens from earlier editions of this beloved game return, such as the Oracle, the Loser, and the Clone. Newly discovered aliens also join the fray, including Remora, Mite, and Tick-Tock. This classic game of alien politics returns from the warp once more.

In Cosmic Encounter, each player is the leader of an alien race. On a player’s turn, he or she becomes the offense. The offense encounters another player on a planet by moving a group of his or her ships through the hyperspace gate to that planet. The offense draws from the destiny deck which contains colors, wilds and specials. He or she then takes the hyperspace gate and points at one planet in the system indicated by the drawn destiny card. The offense vs. the defenses ships are in the encounter and both sides are able to invite allies, play an encounter card as well as special cards to try and tip the encounter in their favor.

The object of the game is to establish colonies in other players’ planetary systems. Players take turns trying to establish colonies. The winner(s) are the first player(s) to have five colonies on any planets outside his or her home system. A player does not need to have colonies in all of the systems, just colonies on five planets outside his or her home system. These colonies may all be in one system or scattered over multiple systems. The players must use force, cunning, and diplomacy to ensure their victory.” 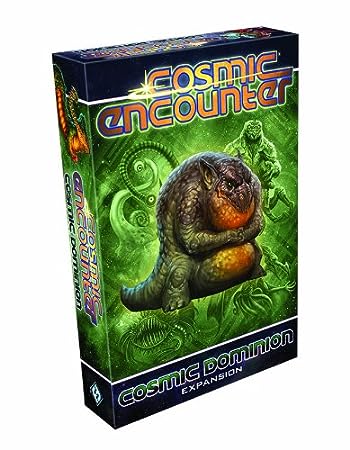 From BGG:
“The fifth expansion set for the Fantasy Flight Games version of Cosmic Encounter, Cosmic Dominion has the unique distinction of having been designed and developed by the fan base of Cosmic Encounter, comprising nearly two years of collaboration on both Facebook and BGG.

Cosmic Dominion adds 30 new aliens to the FFG canon. These will include a few favorite classics from the good old days, with a large number of new alien powers contributed by a wide variety of fan designers.

The set also includes a brand-new Reward Deck that can stand alone or be mixed with the one in Cosmic Incursion, but that is composed almost entirely of new cards, many with interesting twists on standard ones.

Finally, included are special “Special Ship Markers” that can be used for a variety of variants, with some included in the rulebook to start you off.”

Runewars – 33% Off!
Originally shared by Board Gaming Deals. 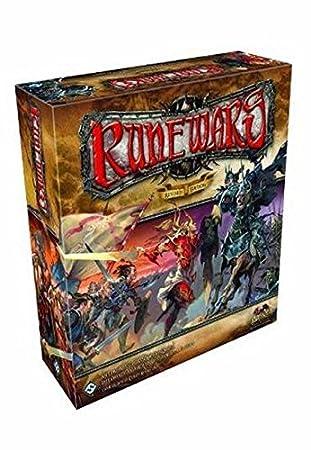 From BGG:
“Runewars is an epic board game of conquest, adventure, and fantasy empires for two to four players. Runewars pits players against each other in a strategic game of battles and area control, where they must gather resources, raise armies, and lay siege to heavily fortified cities.

Runewars takes place in the same popular fantasy universe as the board games Runebound, Descent: Journeys in the Dark and Rune Age, and dozens of fan-favorite heroes and monsters play their part. The wars for the dragon runes are beginning, and only one faction will emerge victorious.” 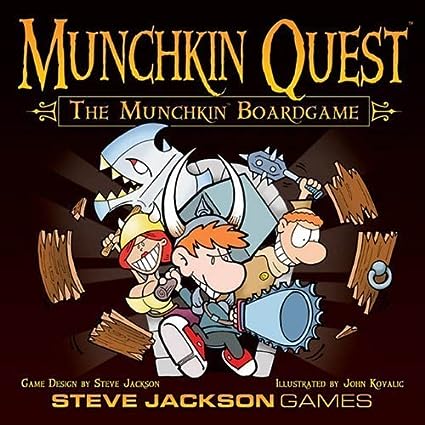 From BGG:
“Kill the monster, grab the treasure, stab your buddy. That’s what it’s all about. Now, Munchkin comes to the boardgame.

Cooperate with the whole group, adventure with a partner, or strike out on your own. You don’t know what’s behind a door until you open it . . . then another tile is added to the dungeon. Battle monsters for power and treasure, or send them after your friends. Reach Level 10, and then get out alive if you can!”

Robinson Crusoe: Voyage of the Beagle Expansion – 50% Off!

From BGG:
“Robinson Crusoe: Adventure on the Cursed Island – Voyage of the Beagle consists of several linked scenarios for the Robinson Crusoe base game, with the consequences of one scenario carrying over into later ones.”

From MM:
“13 Frights is a trick taking card game where players bid candy treats for frightful tricks collected on Halloween Night! Points are earned by collecting spooky Tricks revealed over 13 rounds of play as well as hoarding leftover candy.”

From BGG:
“Your genius could have been such a boon to humanity. Your death ray had wonderful pest control applications, and your volcano activator was perfect for fighting global warming. But the fools at the institute, they wouldn’t listen. They called you mad! You built a monster to rend them limb from limb, which your minions assured you was the very worst way to be rended. When it became clear that the only hope for the world was your own benign leadership, you took control of TV to announce this fact. But your broadcast was interrupted by someone else taking control of TV and announcing his own plan for world domination – and then that broadcast was interrupted by yet another interloper. So. Competition. Well, the world will never be as scared of these upstarts as it will be of you. Archimedes once said, “Give me a long enough lever and a place to stand, and I will move the world.” You will be the most terrifying lever the world has ever seen.

Nefarious is a quick-playing game in which the players race to build inventions like a freeze ray, cloaking device, or robotic pet before their opponents can do the same. (Interesting side note: Eighteen different artists contributed to the artwork on the different inventions in the game.)

Nefarious is played over several rounds. In each round the players simultaneously choose and reveal one of their actions that will allow them to allocate one of their Minions to an area on their Lair, obtain money, obtain a blueprint for an invention, or build one of their inventions if they have enough money to do so. The minions that you allocate to your Lair can earn you additional income depending on the actions that your neighbors choose. The first player to build 20 or more points worth of Inventions AND have more points than any other player wins.

There is a twist to the game, though – actually, two twists! At the beginning of the game, you randomly draw two Twist cards, which change the environment so that the game plays differently each time. This means that in order to win, the players will have to revise their strategies each time they play Nefarious.”