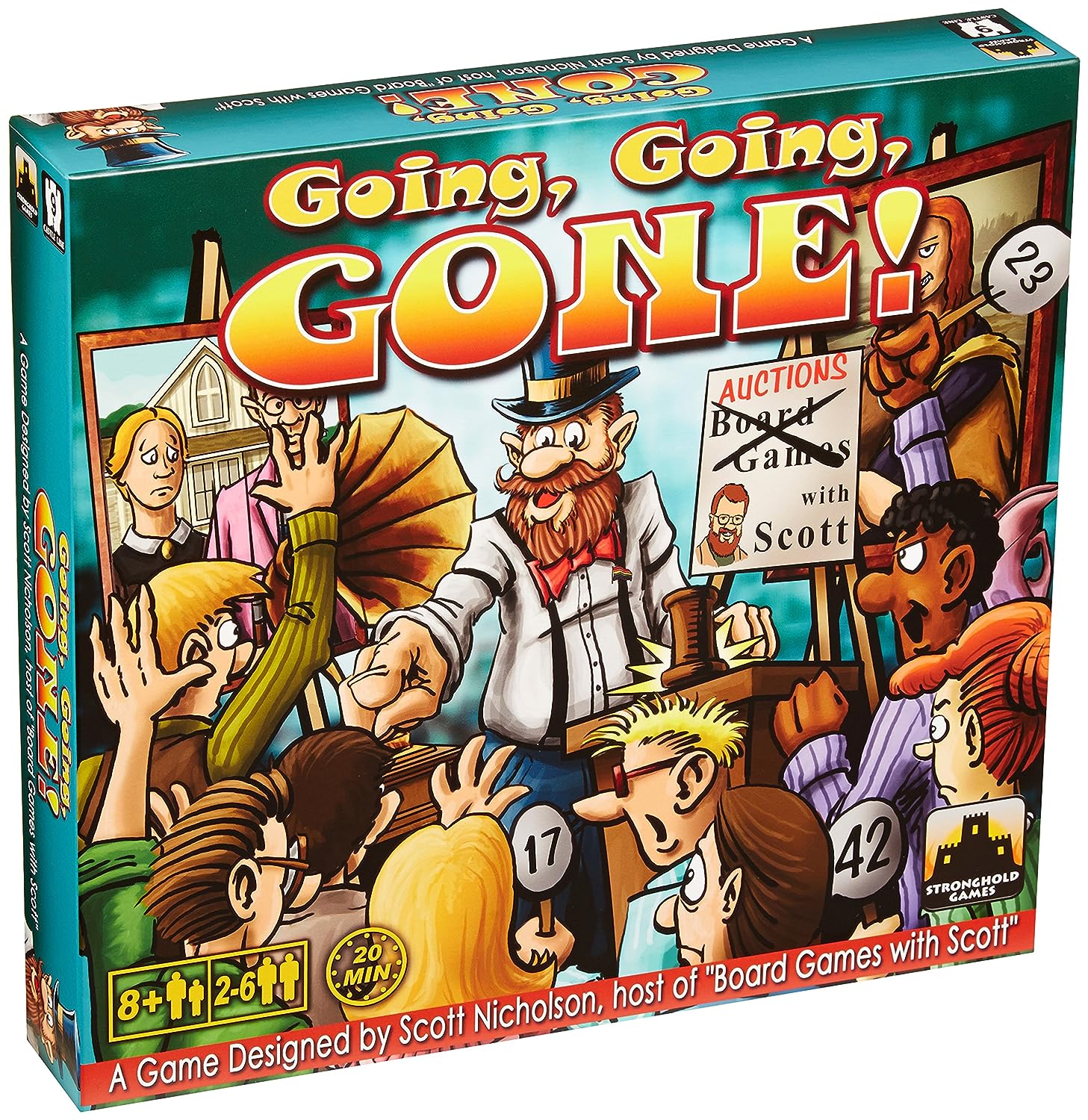 From BGG:
“Can you keep calm while bids are rising? Experience the exhilaration of real life auctions!

Going, Going, GONE! is a simple-to-learn, exciting and unique game for players of all skill levels! It is ideal for playing in public spaces. Since the players control the pacing of the game and the variants used, the game adapts to the playing style of the players.” 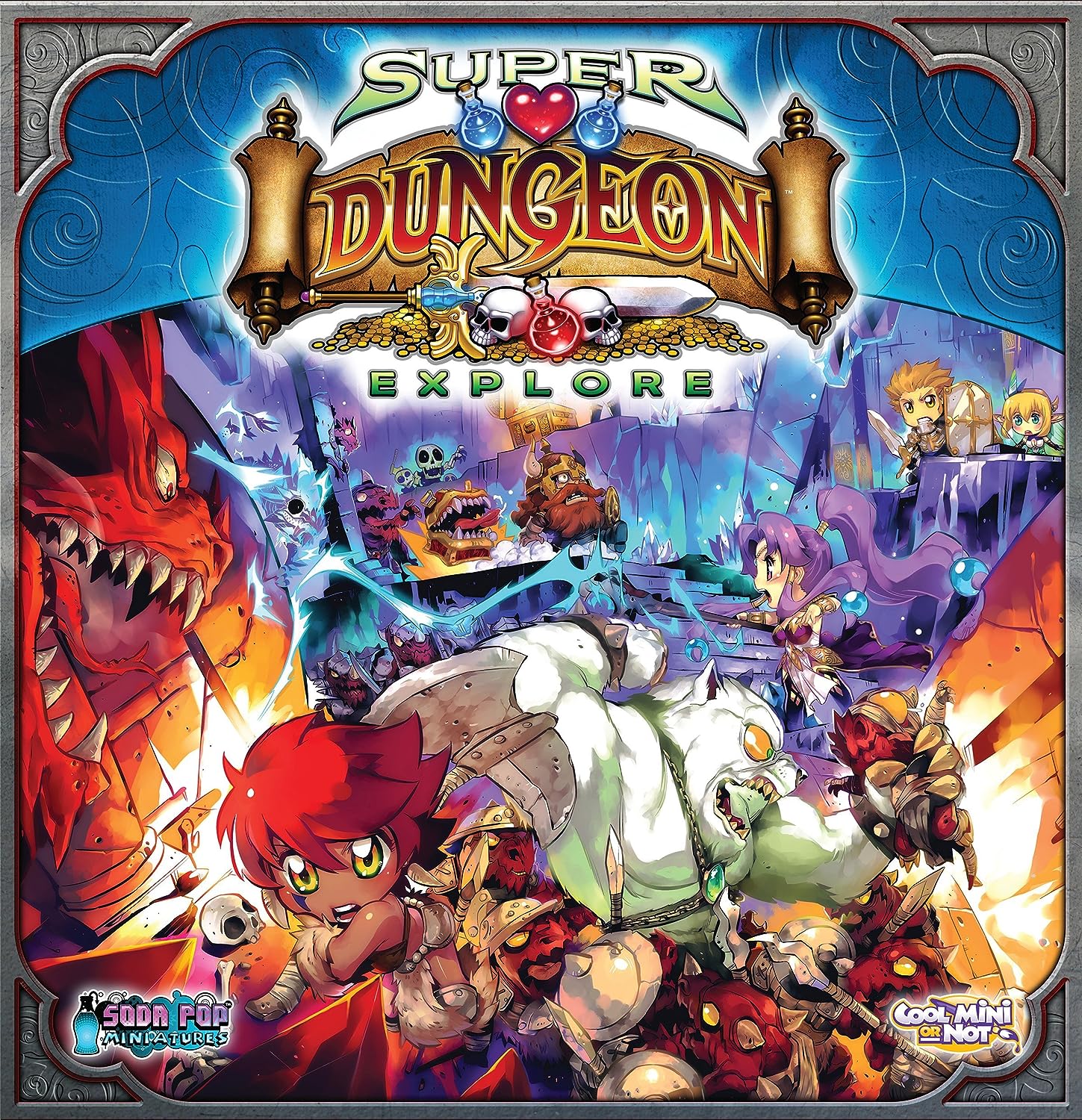 From BGG:
“Super Dungeon Explore (SDE) is a dungeon crawler inspired by old Japanese console RPGs. The 52 included miniatures are done in a cute / chibi / super-deformed style, which means the head is roughly the same size as the rest of the body.

One to five players take the role of classic fantasy heroes like the human paladin, a dwarf fighter, or an elf ranger. One player is the “Dark Consul” who controls the monsters of the dungeon. Every hero/monster has a character card that details the stats for movement, attack, armor, willpower, dexterity, action points and hearts (= life points). Additional information may include special abilities / actions / attacks and potions.

The game is played on modular dungeon boards. During a round of play, the game passes back and forth between single heroes and the monsters, but the exact order may change from round to round. The characters use the stats from their character card, special dice (with hearts, potions and stars) are only used for combat and checks. If the heroes wound the opponent, they may draw loot cards to improve their stats. There is also the possibility to open treasure chests to find even more powerful things. The monsters have no possibility to “level up” apart from a single late game upgrade but the Dark Consul has an unlimited number of them. 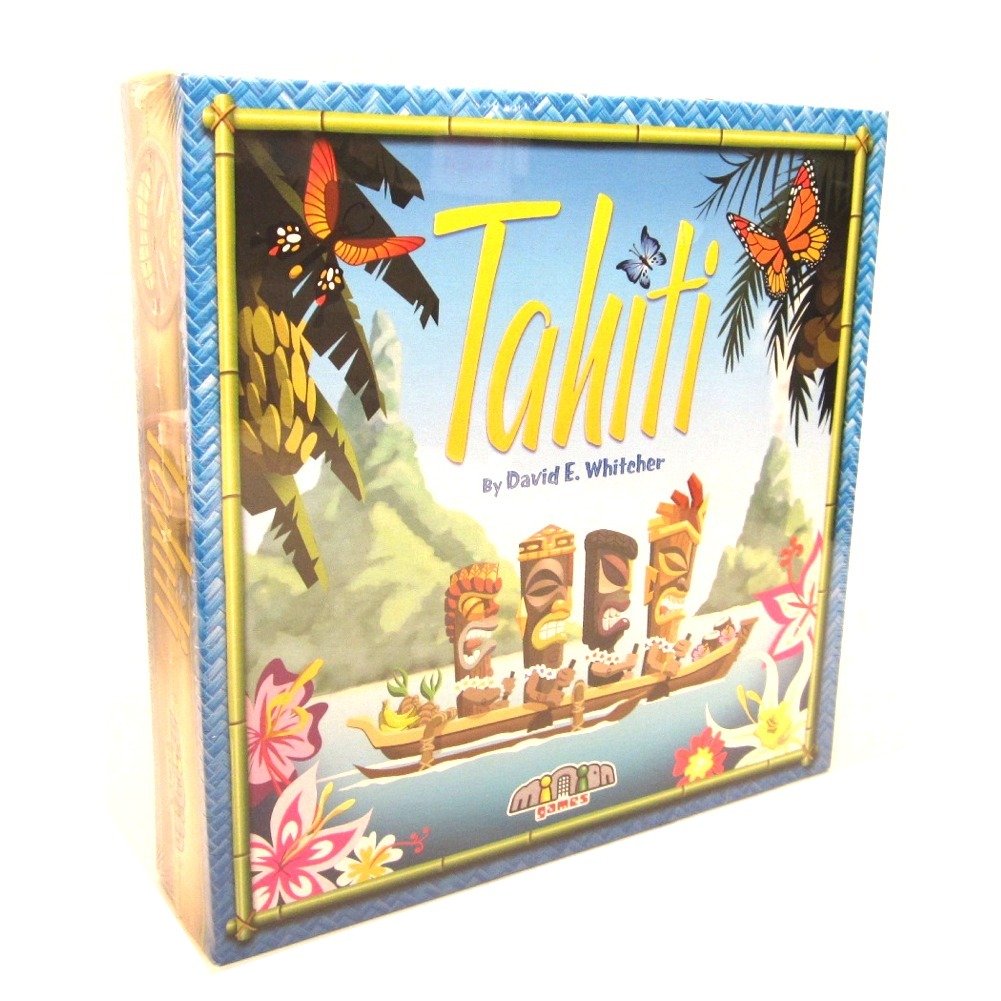 From BGG:
“Your small island is peaceful and prosperous – so prosperous that your tribe has grown beyond its ability to sustain you! Fortunately, being a peaceful people you have chosen not to fight over what little there is. Instead, you set out in your seagoing Wa’a (canoe) to fish and gather crops from the many nearby islands. The fertility goddess Haumea has blessed these islands, and they are rich with fruits, vegetables, and spices. It is a matter of pride to collect the finest harvest for the village. Can you win the race against time and the sea, and prove that you are the best gatherer of all?

In Tahiti the goal is to collect crops (coconuts, taro, bananas, spice) and fish from the surrounding islands to score points with bonuses for making full sets and acquiring the most of their family favorites which are hidden from the other players.

The game starts off with just your home island and its immediate neighboring islands. Players build up the archipelago of fertile islands with the guidance of Haumea for the first part of the game until all islands are in play. Players seed the islands each turn giving them some control over where crops replenish. Once the archipelago is formed, the late season is triggered when crops start becoming scarce, with players occasionally stopping an island from producing altogether. Although the late season may not be as good for crops, fishing becomes easier with bonuses given to the waters around some of the islands.

During all this the players travel by Wa’a from island to island using action points to collect the crops they want or can get to before the others take them. As the Wa’a fills, it becomes slower limiting the number of actions they have. There are also treacherous reefs around the islands that require you go around them or risk losing some of the crops aboard your Wa’a. At the end of the year, the one who most efficiently gathers food for their family wins.” 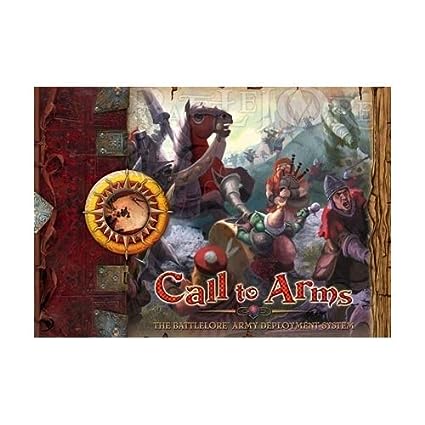 From BGG:
“Call to Arms is the first purchasable expansion to the popular BattleLore game system. This expansion allows for the personalized deployment of your troops. Individual games will no longer be subject to predetermined scenarios and troop placement.

Instead, players may choose various pre-defined battle maps (or create their own!). Then from an innovative Deployment deck, players may set-up their armies as they please. The new deployment deck will allow you to react to the land, establish reserves, and gain the initiative by out-scouting your opponent.

The expansion also introduces a more organized deployment system through the Feudal Levy system: new tokens are included that correspond to the three colour types of troops.

The organized version also includes further customization with the Specialist concept. Players may choose two specialist cards during set-up. Benefits range from upgrading all archers to long bows, increasing unit size based on your Warrior’s Level, and additional movements, to name a few.” 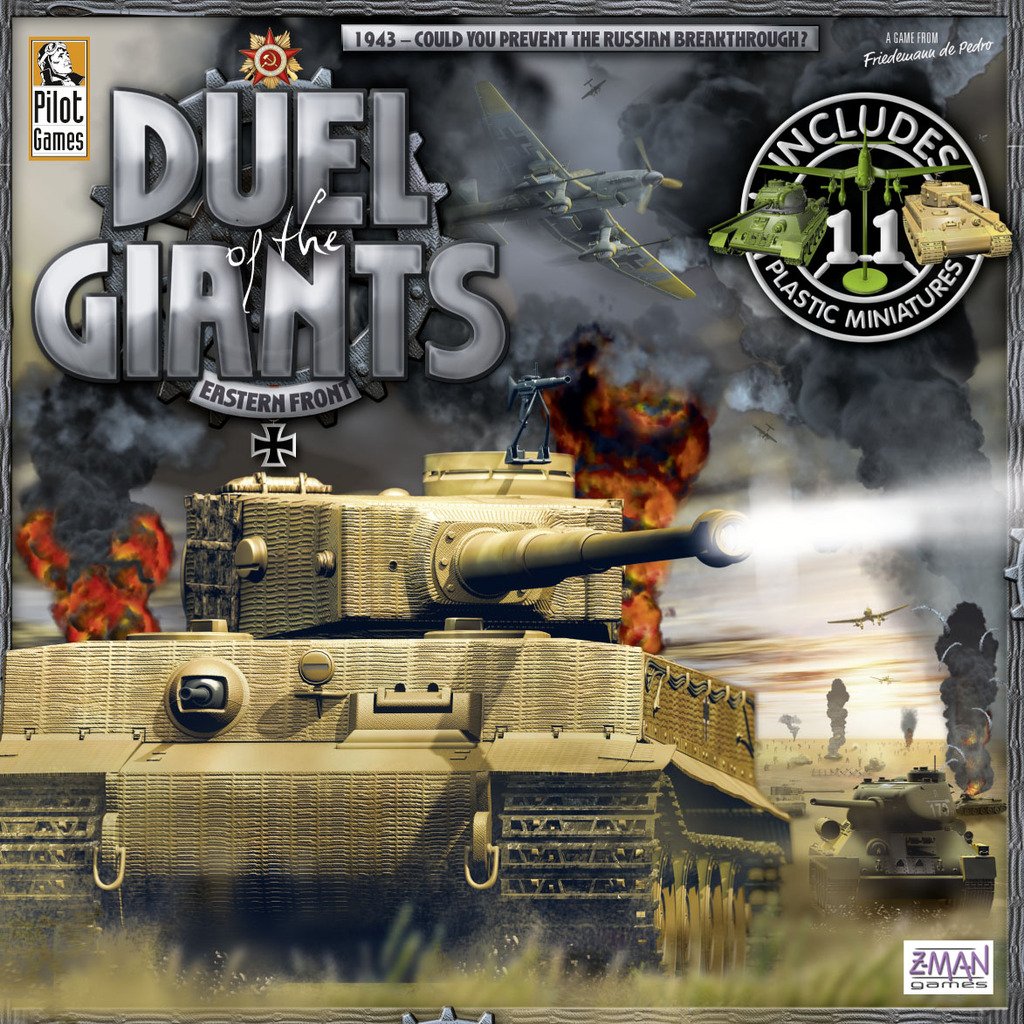 From BGG:
“From the designer of Duel in the Dark, comes tank battles on the Eastern Front. Russians vs Germans. As the German player, are you prepared to defend your section of the front against the endless Red hordes? Or, as the Soviet player, are you going to be able to break through the Fascist lines and continue the advance towards Berlin?

“Duel of the Giants” allows you to recreate the great tank battles on the Eastern Front in 1943. As the German player, you must plan your moves carefully to anticipate the Soviet advance. The Soviet player can take chances with his many tanks to overwhelm the limited German defenses.

Good planning, preparation, and skill will be required to carry the day. Onward to victory – you now must begin the fight of your life…

Comes with 11 plastic minis – 10 tanks and one Stuka plane.” 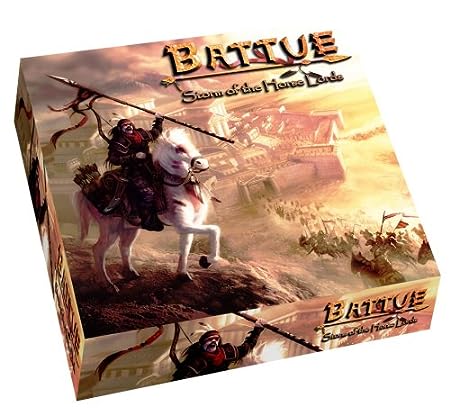 From BGG:
“Rooted in the World of Terris, a brutal, dark fantasy setting envisioned by authors Robin Laws and Scott Hungerford, Battue: Storm of the Horse Lords is a strategy board game in which players take control of a horde of Horse Lords bent on looting Tarsos, the City of Brass Pillars.

Battue is a conflict based game in the same vein as Risk, whereby players are trying to control the city of Tarsos by moving Mongolian styled tribes and their units into key positions and eliminating enemy forces. Players are able to create multiple forces called Hordes. The city of Tarsos is made up of many districts, which start play face down and unknown. As hordes enter new sections they are flipped and if defeated they can offer benefits such as additional troops and varying victory point values. 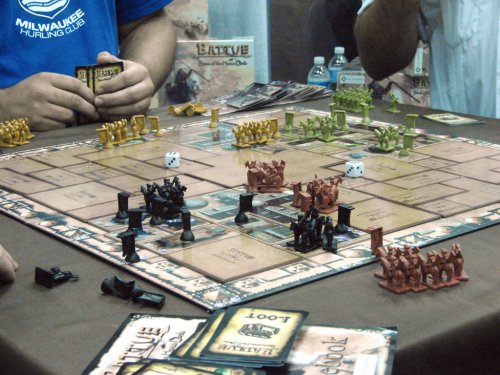 The game features a modular board, allowing for the game to be tactically different with each play.

Further expansions will introduce new rules and options as well as allow additional players to join the game.” 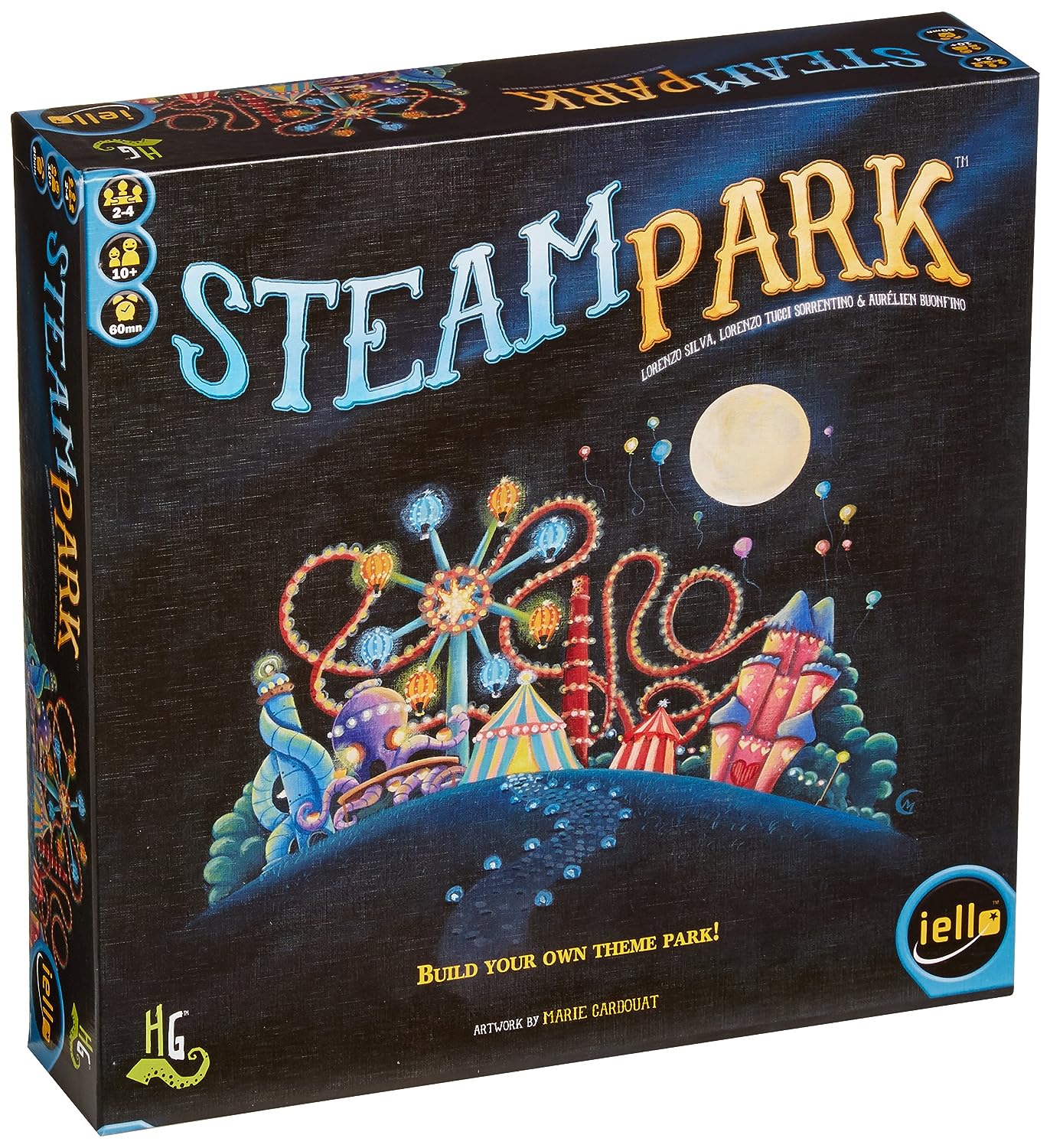 From BGG:
“Clockwork Kingdom is a game in which each player takes the role of a lord attempting to claim the throne in the wake of the king’s death. To start the game, each player has a small army of loyal steam-powered automatons to do their bidding. Each player must choose where to send his servants, whether to get supplies from the market, build useful contraptions in the workshop, or even attempt to acquire powerful alchemy stones, all the while warring with opponents in a number of battlefields in an attempt to control the kingdom by force.

However, players have more at their disposal than simple automatons. Throughout the course of the game, players can also recruit Alchemists, Professors, and Artificers to their cadre of loyal vassals, each with their own unique abilities. To claim the Clockwork Throne, players must make difficult decisions to outwit their opponents in an attempt to gather resources, obtain workers, manufacture contraptions, and dominate battlefields.”

From BGG:
“Regarded by many as Reiner Knizia’s masterpiece, Tigris & Euphrates is set in the ancient fertile crescent with players building civilizations through tile placement. Players are given four different leaders: farming, trading, religion, and government. The leaders are used to collect victory points in these same categories. However, your score at the end of the game is the number of points in your weakest category, which encourages players not to get overly specialized. Conflict arises when civilizations connect on the board, i.e., external conflicts, with only one leader of each type surviving such a conflict. Leaders can also be replaced within a civilization through internal conflicts.”