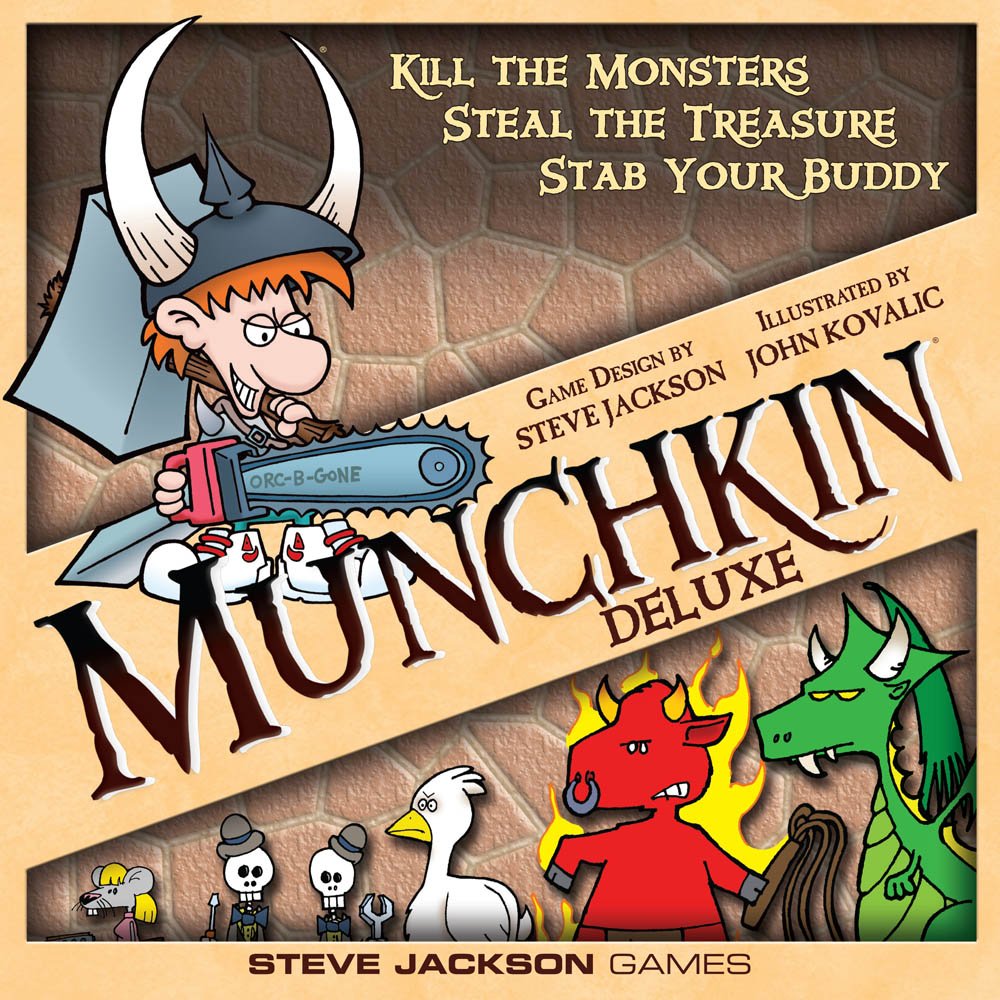 From BGG:
“Go down in the dungeon. Kill everything you meet. Backstab your friends and steal their stuff. Grab the treasure and run.

Admit it. You love it.

And it’s illustrated by John Kovalic! Fast-playing and silly, Munchkin can reduce any roleplaying group to hysteria. And, while they’re laughing, you can steal their stuff.” 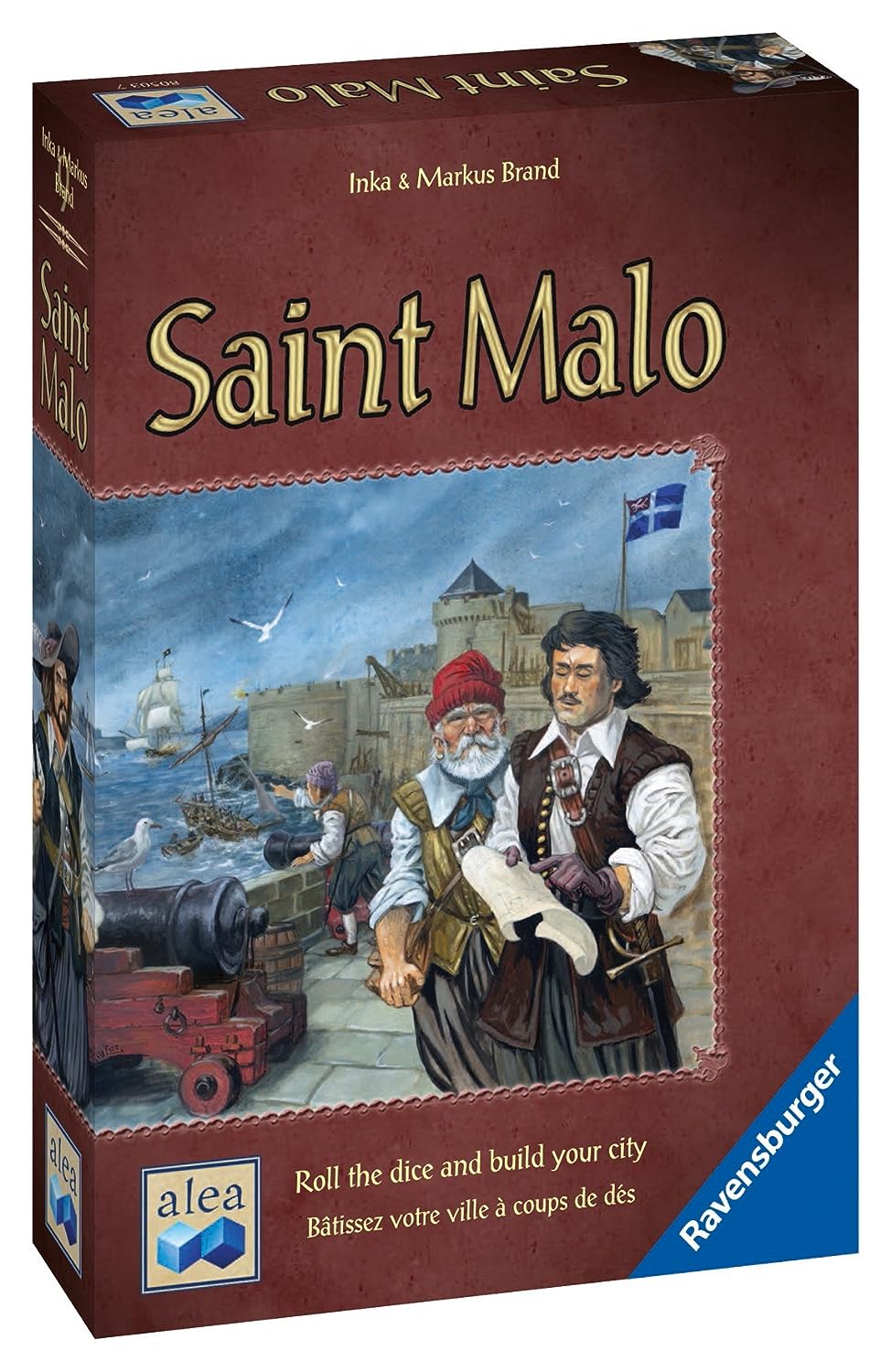 From BGG:
“Developer Stefan Brück at alea describes Saint Malo as “a light, dice-rolling strategy game in which the players draw their own city buildings, walls, and people on wipe-off boards”.

In more detail, in Saint Malo players roll five dice to gain various resources; combinations of dice create enhancements like characters or buildings, which can provide additional victory points, money, or special actions, such as altering the outcome of a die roll. Players draw symbols for their holdings on erasable boards showing a grids of their cities to create individual towns. Players could build storehouses on particular squares, for example, then place a merchant nearby to gain money each turn. Another important character is the soldier; players must acquire these to defend themselves from pirate attacks that can decimate their towns.” 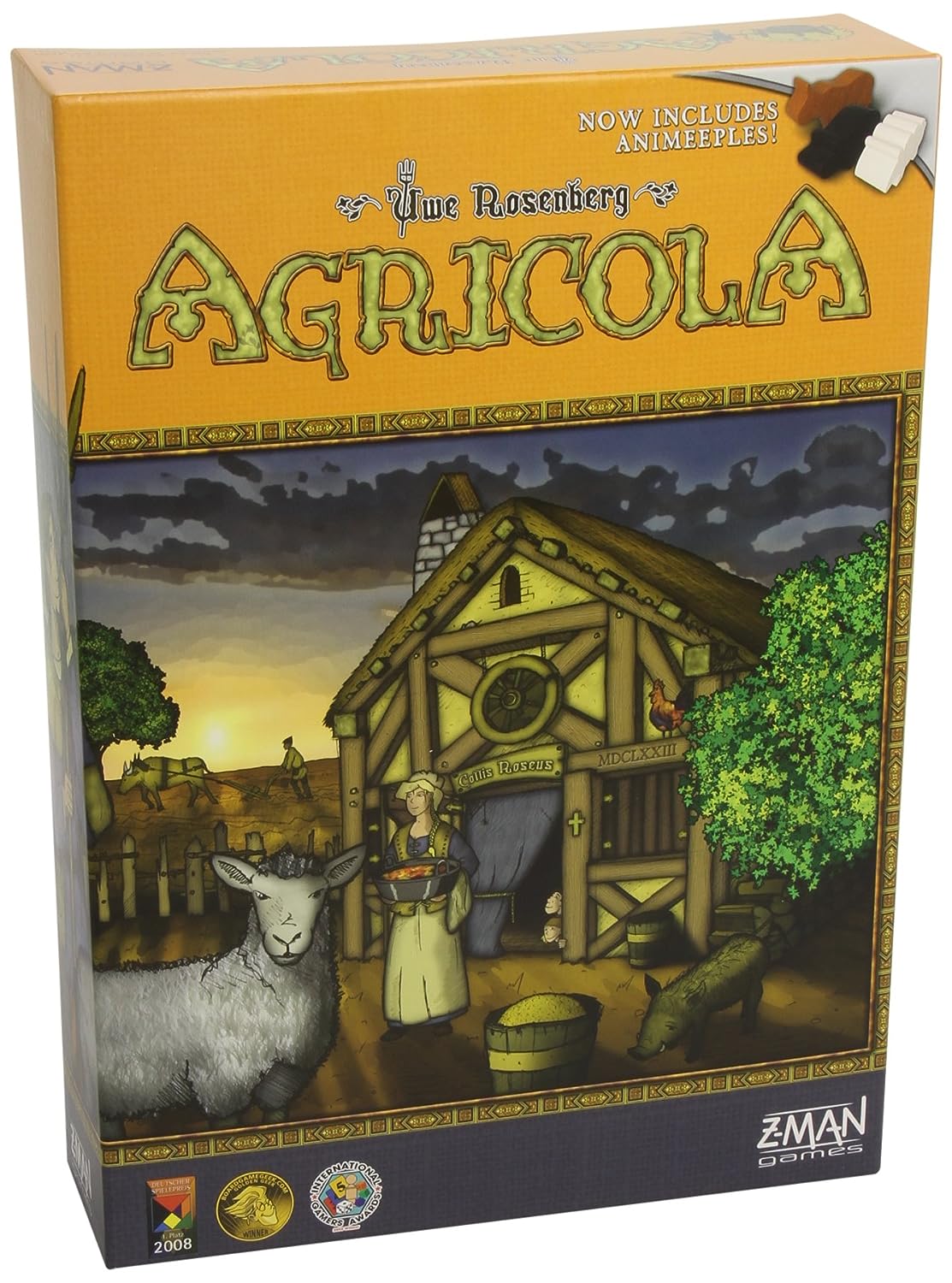 From BGG:
“In Agricola, you’re a farmer in a wooden shack with your spouse and little else. On a turn, you get to take only two actions, one for you and one for the spouse, from all the possibilities you’ll find on a farm: collecting clay, wood, or stone; building fences; and so on. You might think about having kids in order to get more work accomplished, but first you need to expand your house. And what are you going to feed all the little rugrats?

The game supports many levels of complexity, mainly through the use (or non-use) of two of its main types of cards, Minor Improvements and Occupations. In the beginner’s version (called the Family Variant in the U.S. release), these cards are not used at all. For advanced play, the U.S. release includes three levels of both types of cards; Basic (E-deck), Interactive (I-deck), and Complex (K-deck), and the rulebook encourages players to experiment with the various decks and mixtures thereof. Aftermarket decks such as the Z-Deck and the L-Deck also exist.

Agricola is a turn-based game. There are 14 game rounds occurring in 6 stages, with a Harvest at the end of each stage (after Rounds 4, 7, 9, 11, 13, and 14). Each player starts with two playing tokens (farmer and spouse) and thus can take two turns, or actions, per round. There are multiple options, and while the game progresses, you’ll have more and more: first thing in a round, a new action card is flipped over. Problem: Each action can be taken by only one player each round, so it’s important to do some things with high preference. Each player also starts with a hand of 7 Occupation cards (of more than 160 total) and 7 Minor Improvement cards (of more than 140 total) that he/she may use during the game if they fit in his/her strategy. Speaking of which, there are countless strategies, some depending on your card hand. Sometimes it’s a good choice to stay on course, and sometimes it is better to react to your opponents’ actions.” 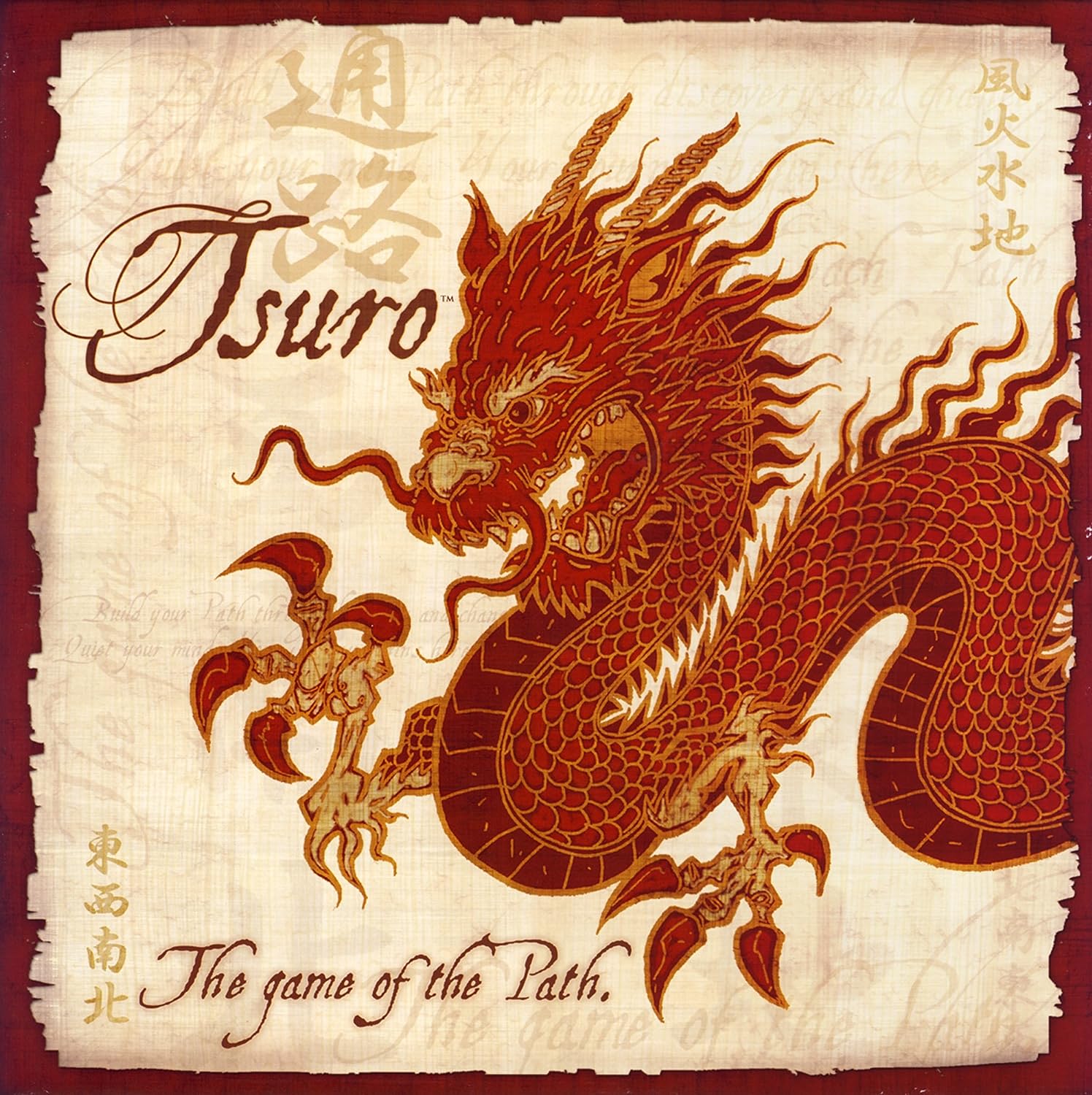 From BGG:
“A beautiful and beautifully simple game of laying a tile before your own token to continue its path on each turn. The goal is to keep your token on the board longer than anyone else’s, but as the board fills up this becomes harder because there are fewer empty spaces left… and another player’s tile may also extend your own path in a direction you’d rather not go. Easy to introduce to new players, Tsuro lasts a mere 15 minutes and actually does work for any number from 2 to 8.

Tsuro has an Asian spiritual theme – the lines representing the “many roads that lead to divine wisdom”, and the game as a whole representing “the classic quest for enlightenment”.

This theme is very light and the game essentially plays as an abstract.” 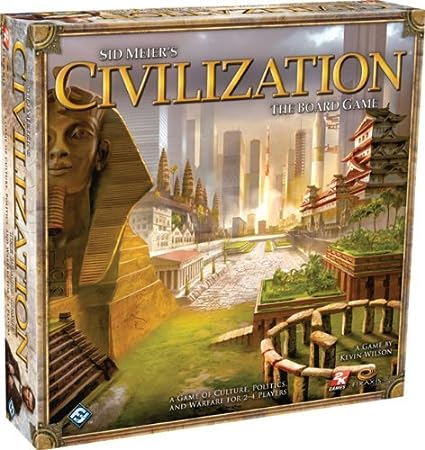 From BGG:
“Before you lies a vast bounty of land, ripe for the plucking. Your meager beginnings will influence the paths you must take. Lead your people well and they will take you to infinite heights of greatness. If civilization manages to endure the ages, your name will hang in every whisper of its legacy…

Fantasy Flight Games is excited to announce the upcoming release of Sid Meier’s Civilization: The Board Game! Forge an empire to stand the test of time using innovative game mechanics with multiple paths to victory.

Will you lead the greatest army in the world to conquer your foes? Or will you be the first to journey to the stars, becoming the most technologically advanced civilization known to man? The choice is yours.

Designed by Kevin Wilson, Civilization: The Board Game is inspired by the legendary video game series created by Sid Meier. Players are tasked with guiding an entire civilization throughout the ages, taking ownership of your people’s technology, economy, culture, and military, as well as all the choices that go along with them. There are four different paths to victory, and each is riddled with opposition.

In Civilization: The Board Game, 2-4 players take on the roles of famous leaders in charge of historical civilizations, each with their own abilities. Players will be able to explore a module game board, build cities and buildings, fight battles, research powerful technology, and attract great people by advancing their culture. No matter what your play style is, there is a civilization for you!

Players start off with a single city, one army figure, and one scout, and from these meager origins you must forge through the ages and become the greatest civilization in the world.”

From BGG:
“Camelot – The Court is a game of beastly back-stabbing and subtle scheming set in the court of King Arthur.

Master the strategies of the royal court: Challenge, scandalise, demote and banish your opponents knights while promoting your own through the ranks to the heady heights of Senator, closest to King Arthur and Queen Guinevere.

Tile based knights in the court of Camelot, are manoeuvred by players using action cards to move and manipulate your Knights, Opponents and the court.

Camelot – The Court having only three rules, a playing time of 30-90 minutes with bright, humorous graphics — is the second title in “The Camelot Chronicles”, a series of easy-to-play games with a target of three rules, maximum playing time of approximately one hour, and universal playability and appeal.”

From BGG:
“The Empire must fall. Our mission must succeed. By destroying their key bases, we will shatter Imperial strength and liberate our people. Yet spies have infiltrated our ranks, ready for sabotage. We must unmask them. In five nights we reshape destiny or die trying. We are the Resistance!

The Resistance is a party game of social deduction. It is designed for five to ten players, lasts about 30 minutes, and has no player elimination. The Resistance is inspired by Mafia/Werewolf, yet it is unique in its core mechanics, which increase the resources for informed decisions, intensify player interaction, and eliminate player elimination.

Players are either Resistance Operatives or Imperial Spies. For three to five rounds, they must depend on each other to carry out missions against the Empire. At the same time, they must try to deduce the other players’ identities and gain their trust. Each round begins with discussion. When ready, the Leader entrusts sets of Plans to a certain number of players (possibly including himself/herself). Everyone votes on whether or not to approve the assignment. Once an assignment passes, the chosen players secretly decide to Support or Sabotage the mission. Based on the results, the mission succeeds (Resistance win) or fails (Empire win). When a team wins three missions, they have won the game.”

From BGG:
“Welcome to the Dungeon — first released as Dungeon of Mandom — is a push-your-luck dungeon delve in which 2-4 players take turns essentially daring each other to go into a dungeon with less equipment than they start off with while filling the dungeon with monsters. Players can win the game by winning 2 rounds or get eliminated from the game by losing 2 rounds. Each player has a 2-sided players card that has a white side and a red side. The first win taps the player card and the 1st loss flips the card over to the red side. A 2nd loss will have the player turn the card back into the box.

The game is played in rounds. The player sets up the base character and all the equipment equipped. This represents every player as a fully equipped dungeon delver.

Each round, the start player (the person who challenged the dungeon last or the last player to be in a dungeon) can choose to draw a card from the monster deck or pass their turn.

If they choose to draw, they can do one of two things: (1) keep it and de-equip an equipment or (2) place it face down in the dungeon. Placing it face down in the dungeon creates the dungeon deck and fills the dungeon with monsters that the challenger will have to face later. If they choose to pass their turn, they cannot participate in the rest of the round. Once only one person is left after all the other players have passed their turn, that player then becomes the challenger and must go into the dungeon with only the equipment he has equipped.

The player then flips cards off the dungeon deck and fights the monsters within. Some equipment allow you to null the enemy damage or be able to withstand it by increasing your HP. If the player survives the dungeon with at least 1 HP, they win that round. If not, they lose. The players then reshuffles all the cards to make a new monster deck and re-equips all the equipment to start a new round.

The game ends when someone has won twice or one player is the last man standing.

Welcome to the Dungeon includes four different sets of character cards whereas Dungeon of Mandom has only a single character.”

From BGG:
“Watch your step! The Ruins of Abetan are a treacherous labyrinth of steep cliffs and rickety bridges, but the fabulous Khrysos treasure inside is all that matters to the Khrysos Hunters.

Expand your hunt to up to six players with Khrysos Hunters: Ruins of Abetan Expansion, which includes ten new Hunters to make your team. Jump the gaps, but don’t get pushed in!”