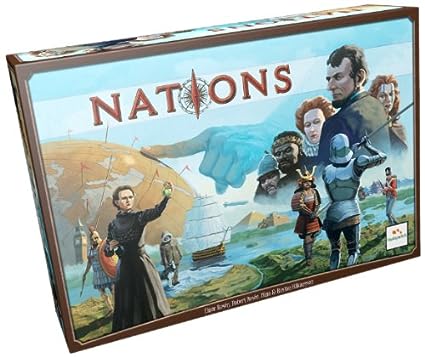 From BGG:
“From the humble beginnings of civilization through the historical ages of progress, mankind has lived, fought and built together in nations. Great nations protect and provide for their own, while fighting and competing against both other nations and nature itself. Nations must provide food and stability as the population increases. They must build a productive economy. And all the while, they must amaze the world with their great achievements to build up their heritage as the greatest nations in the history of mankind!

Nations is an intense historical board game for 1-5 players that takes 40 minutes per player to play. Players control the fate of nations from their humble start in prehistoric times until the beginning of World War I. The nations constantly compete against each other and must balance immediate needs, long-term growth, threats, and opportunities.” 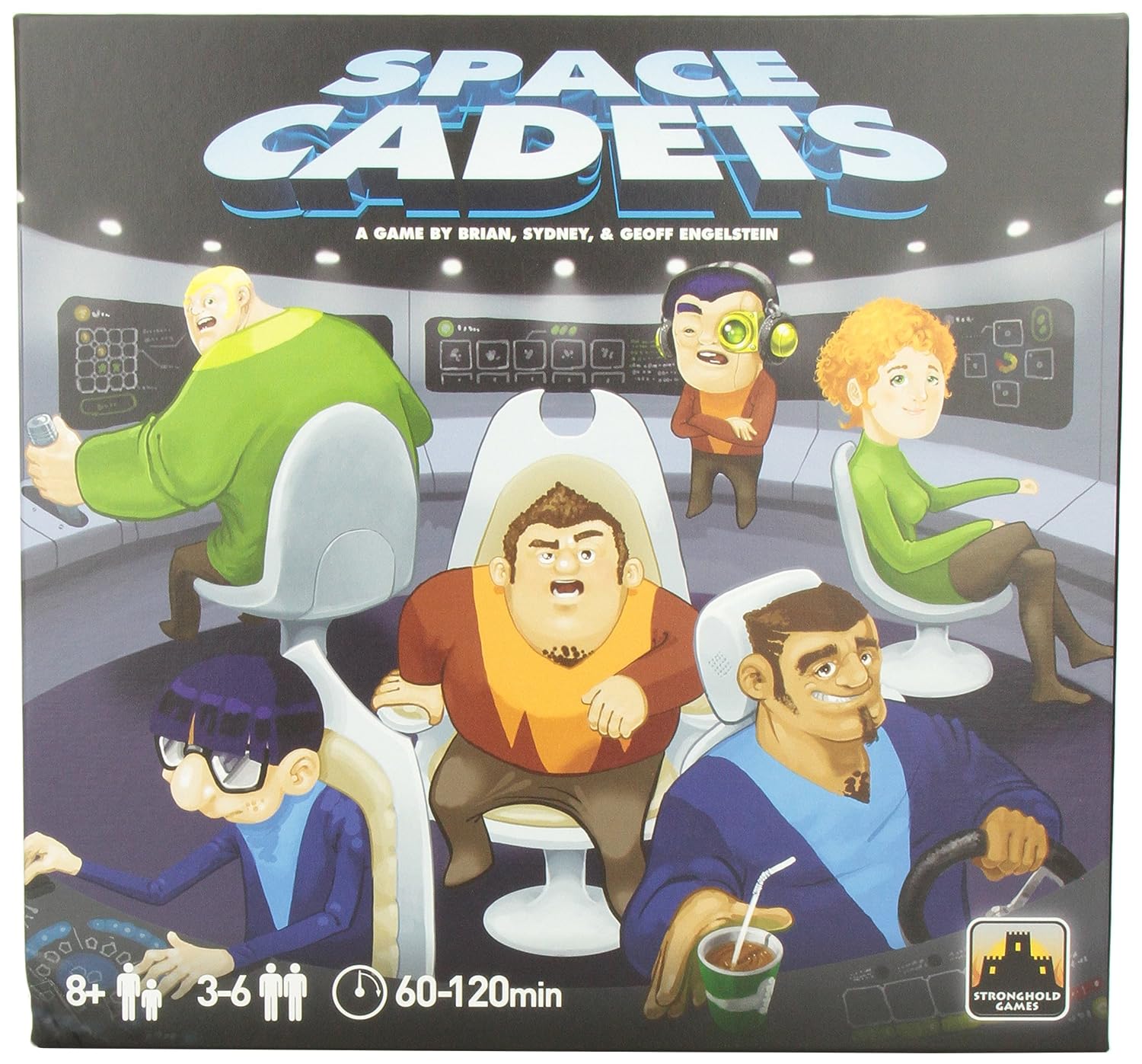 From BGG:
“It’s your lifelong dream – to join the Star Patrol and be part of the crew of an interstellar Starship. You’ve worked hard, graduated from the academy, and received your first assignment as part of a team of young recruits, confident in your training and ready to be put to the test. Nothing can possibly go wrong as you are prepared for anything…

You are the Space Cadets.

Space Cadets is a fun and frantic cooperative game for 3-6 players who take on the roles of Bridge Officers of a Starship. Each officer must accomplish his specific task in order for the team to successfully complete the mission. You might be the…

If your crew can work together to accomplish the mission goals, you just might make it home in one piece.” 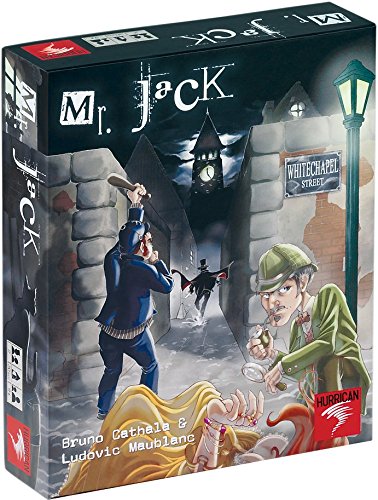 From BGG:
In Mr Jack “One of the two players represents Jack the Ripper, who will be one of the 8 characters on the board. This player knows the identity of this character and his goal is to flee from the district as soon as possible (or avoid being accused for eight turns). The other player represents an independent investigator (not represented on the board) who tries to guess the identity of Jack. But he can make only one accusation during the game!

During each turn the players move the characters, using their special powers, placing them either in shadow or light. At the end of each turn, the witnesses declare if Jack is visible (in light, or adjacent to another character) or not (alone in the shadows). This allows the investigator to know which characters are innocent. This continues as the investigator tries to eliminate suspects while Jack tries to escape. Intuition, logic and cold blood will be necessary for each of the two participants.” 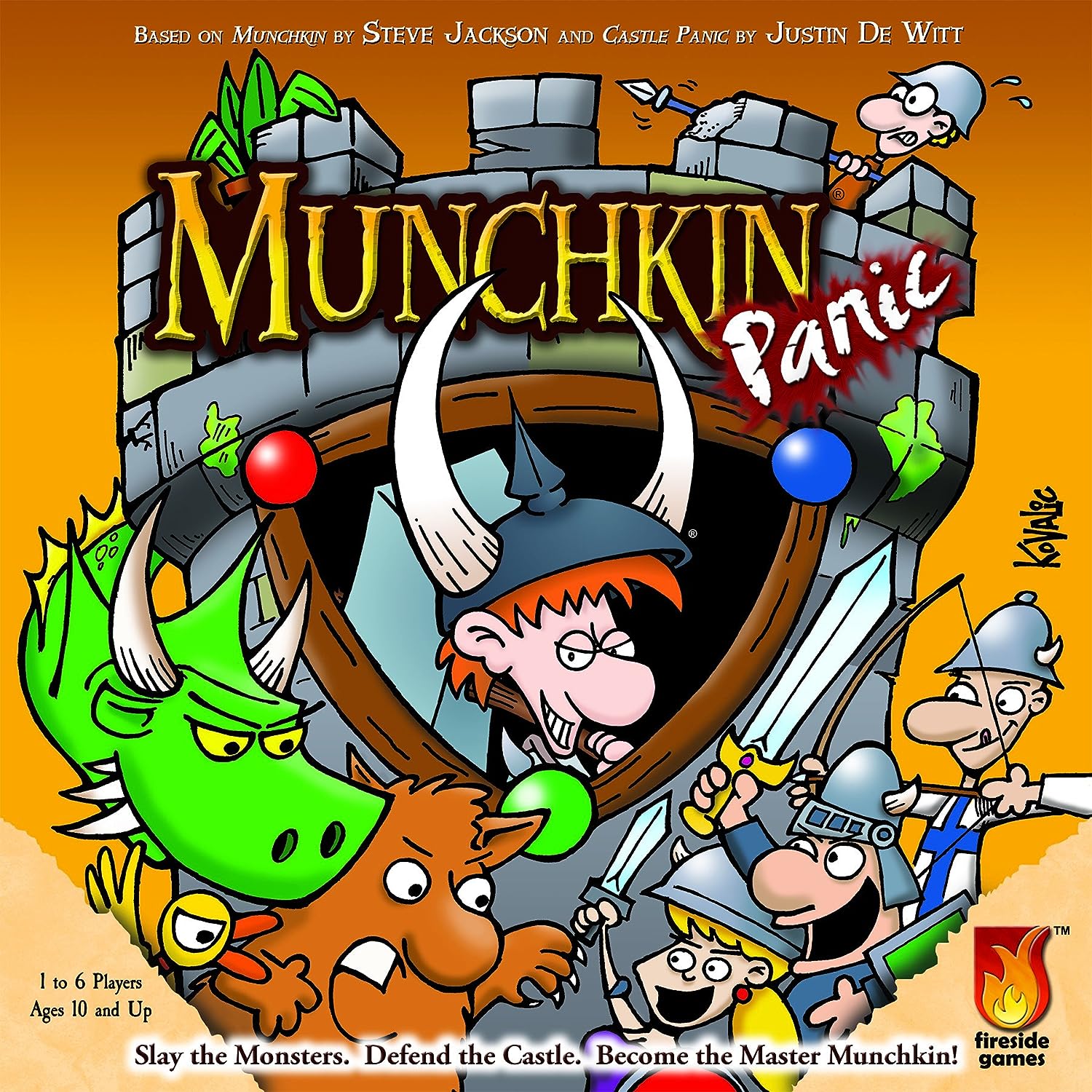 In this hybrid game, the Munchkin monsters have found the Castle Panic towers and are on the rampage! Players need to combine cards to hit and slay the monsters before they destroy the castle. The card combos available in Munchkin Panic are created from a unique mixing of the decks of the two source games. Each defeated monster becomes a trophy and gives up its treasure to the victor. If players work together to defeat the monsters, the player with the highest point count becomes Master Munchkin — but players must balance their self-interest with the cooperation necessary to survive. If players get too greedy, the monsters will stomp the castle flat while the players are too busy fighting amongst themselves!” 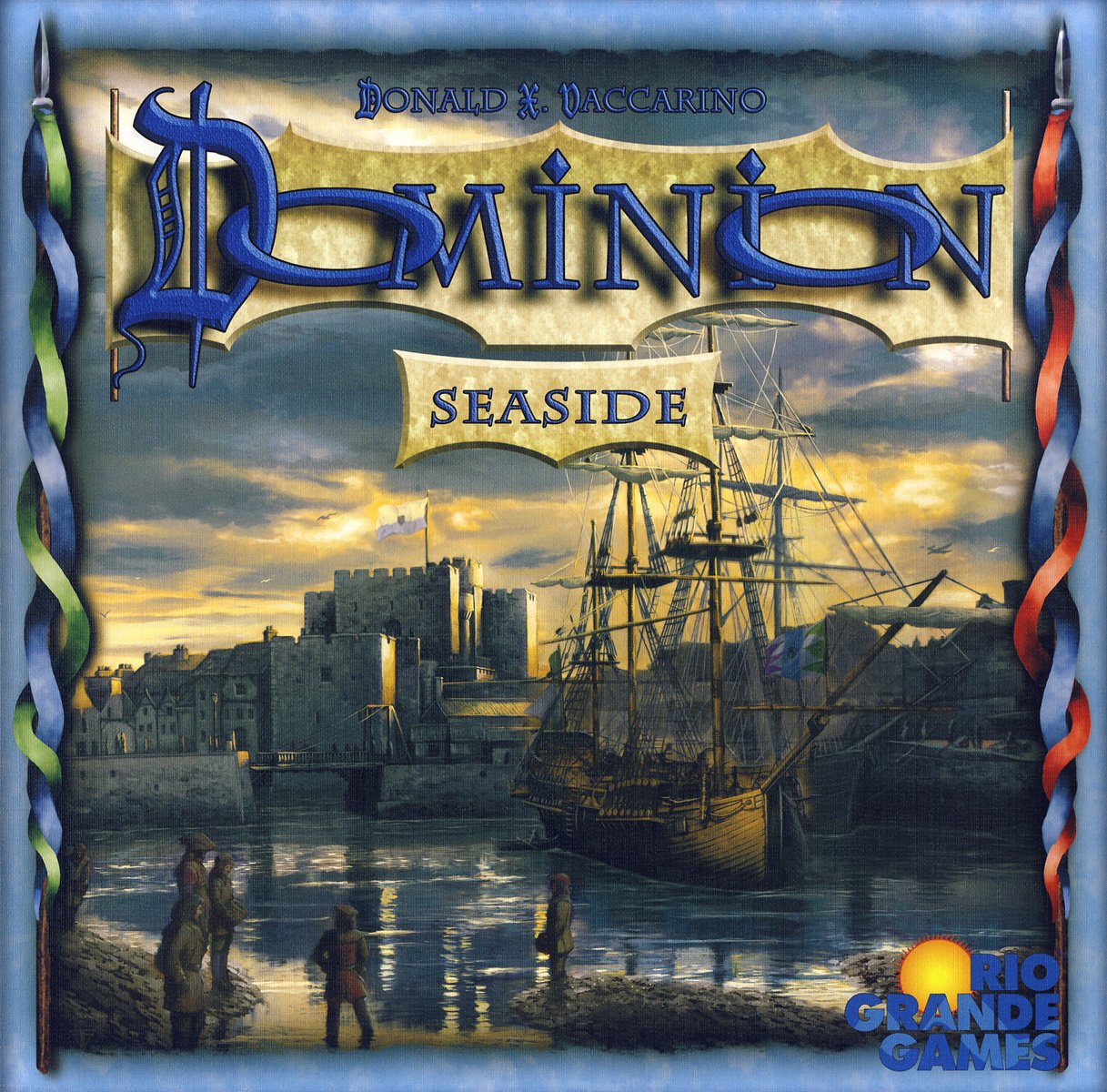 From BGG:
“Dominion: Seaside is an expansion to both Dominion and Dominion: Intrigue. As such, it does not contain material for a complete game. Specifically, it does not include the basic Treasure, Victory, Curse, or Trash cards. Thus, you will need either the base game or Intrigue to play with this expansion, and you will need to have experience playing Dominion with either of the first two games. It is designed to work with either or both of these sets, and any future expansions that may be published.

From the back of the box: “All you ask is a tall ship and a star to steer her by. And someone who knows how to steer ships using stars. You finally got some of those rivers you’d wanted, and they led to the sea. These are dangerous, pirate-infested waters, and you cautiously send rat-infested ships across them, to establish lucrative trade at far-off merchant-infested ports. First, you will take over some islands, as a foothold. The natives seem friendly enough, crying their peace cries, and giving you spears and poison darts before you are even close enough to accept them properly. When you finally reach those ports you will conquer them, and from there you will look for more rivers.

One day, all the rivers will be yours.””

Dungeon Fighter – 26% Off!
Originally from Board Gaming Deals. 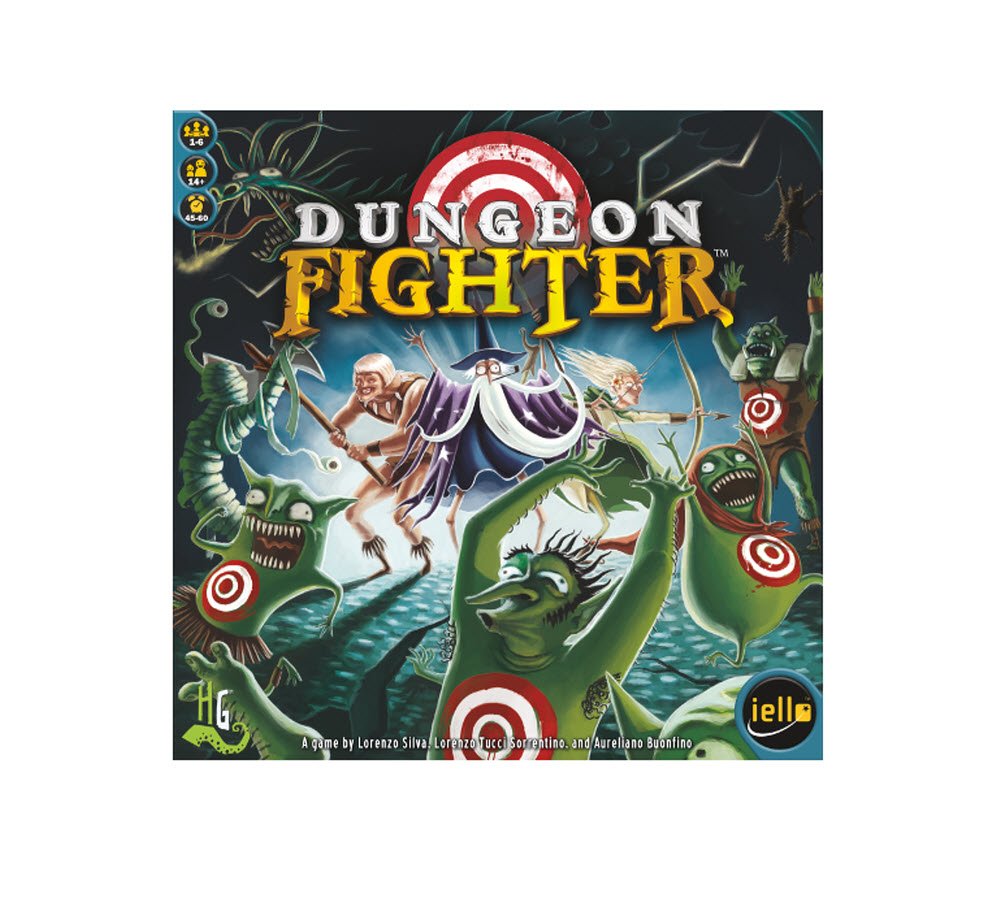 From BGG:
“Explore spooky dungeons, find glorious treasure, buy powerful magic items, and challenge the most horrible creatures. Will your party be able to defeat the final boss?

In Dungeon Fighter, a fully cooperative board game, players take on the roles of heroes venturing deep into a three-tier dungeon. Along the way, they explore the dungeon, search its many rooms, and face endless hordes of vicious monsters. Best of all, your skill determines the ability of your character. Can you kill Medusa without looking into her eyes, defeat the Minotaur in the labyrinth, or resist the breath of the dragon? Will you be able to hit a target by throwing the dice under your leg with your eyes closed?

You will feel truly part of a centuries-old battle between good and evil…with a touch of foolish stupidity.”

Pandemic: State of Emergency Expansion – 55% Off!

From BGG:
In the Hobbit: Enchanted Gold “Bilbo and the dwarves set out to slay Smaug, but the path to the dragon’s refuge is beset with peril!

Players gain gems through skillful play of their cards, and with combinations of different colored gems, they can overcome opponents and pave the way to Smaug. Whoever defeats the most foes, and thus garners the most victory points, wins.”

From BGG:
“Each player in Korrigans has two korrigans (a.k.a. fairies or spirits) and must use them to move about the landscape, claim animal tokens in order to access other parts of the land, and eventually find the pot of gold that will become visible once the rainbow’s location is revealed.

In more detail, players take their first two turns to place their korrigans on the game board; with each korrigan you place, you look at the tokens in that location and keep one of them. These tokens show either gold (which possibly gives you points at the end of the game) or an animal (which allows you to pass through gates that bear that animal to reach a different landscape). From the third turn on, players use their animal tokens to move their korrigans and pick up more tokens. Each round the player holding the bag draws a rainbow token and places it in one of the rows or columns on the board; this means that the pot of gold won’t appear in this row or column in the final part of the game. 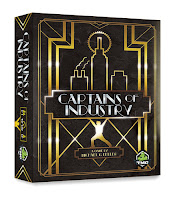