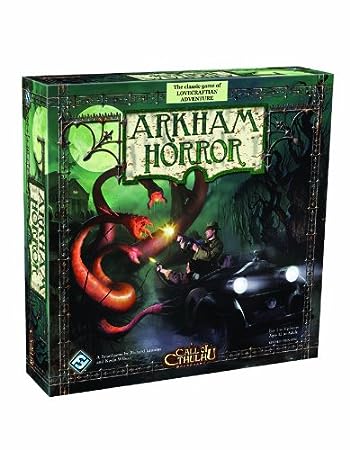 From BGG:
“The year is 1926, and it is the height of the Roaring Twenties. Flappers dance till dawn in smoke-filled speakeasies drinking alcohol supplied by rum runners and the mob. It’s a celebration to end all celebrations in the aftermath of the war to end all wars. Yet a dark shadow grows in the city of Arkham. Alien entities known as Ancient Ones lurk in the emptiness beyond space and time, writhing at the gates between worlds. These gates have begun to open and must be closed before the Ancient Ones make our world their ruined domination. Only a handful of investigators stand against the Arkham Horror. Will they Prevail?

Arkham Horror is a cooperative adventure game themed around H.P Lovecraft’s Cthulhu Mythos. Players choose from 16 Investigators and take to the streets of Arkham. Before the game, one of the eight Ancient Ones is chosen and it’s up to the Investigators to prevent it from breaking into our world. During the course of the game, players will upgrade their characters by acquiring skills, allies, items, weapons, and spells. It’s up to the players to clean out the streets of Arkham by fighting many different types of monsters, but their main goal is to close portals to other dimensions that are opening up around town. With too many portals open the Ancient One awakens and the players only have one last chance to save the world. Defeat the Ancient One in combat!” 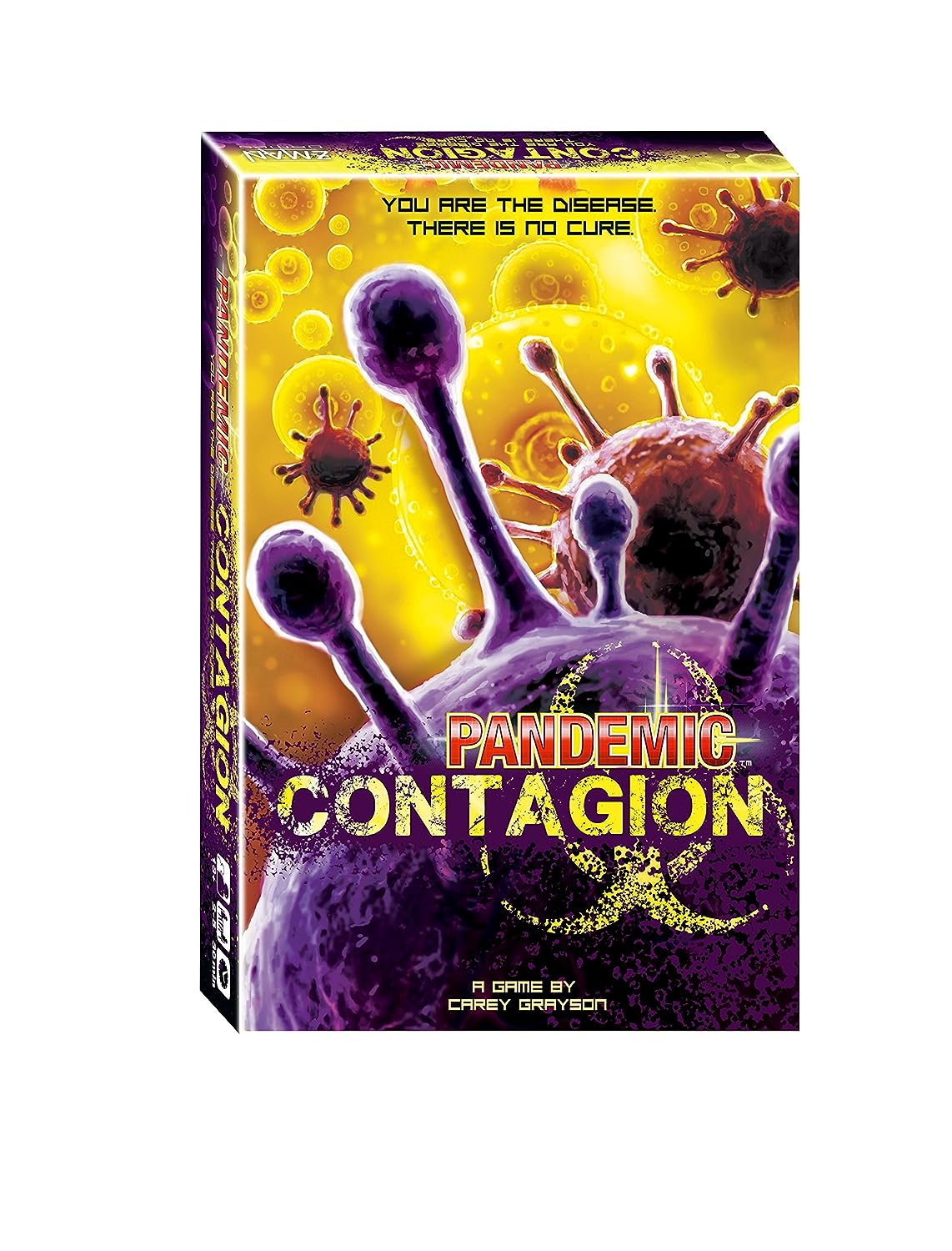 From BGG:
“After many years of trying to defeat the diseases that threaten mankind’s existence, the tables have been turned. You are now the disease and guess what? There is no cure.

In Pandemic: Contagion, you are competing against other diseases (fellow players) to see who can eliminate humanity. With no cure to be had, the one of you that wipes out all human civilization will come out on top as the most deadly disease ever known to man, may he rest in peace.

Pandemic: Contagion includes a deck of contagion cards with differing colored borders, city cards with similar colored borders, event/WHO cards, player disease card and disease cubes. On a turn you take two of three possible actions, and you can take the same action twice. Those actions are:

Event cards are drawn at the start of each round and affect everyone during their turn. You might benefit from the card or it could have a negative impact. WHO cards are always bad, but your resistance will lessen whatever the penalty would be based on its level, if you planned ahead.

Mid-game scoring occurs when the second, fourth and sixth skull comes out. When a city icon appears, a new city is introduced. Once the event/WHO deck runs out or only two city cards remain in play, the game ends, with players conducting a final scoring round to see which virus is victorious.” 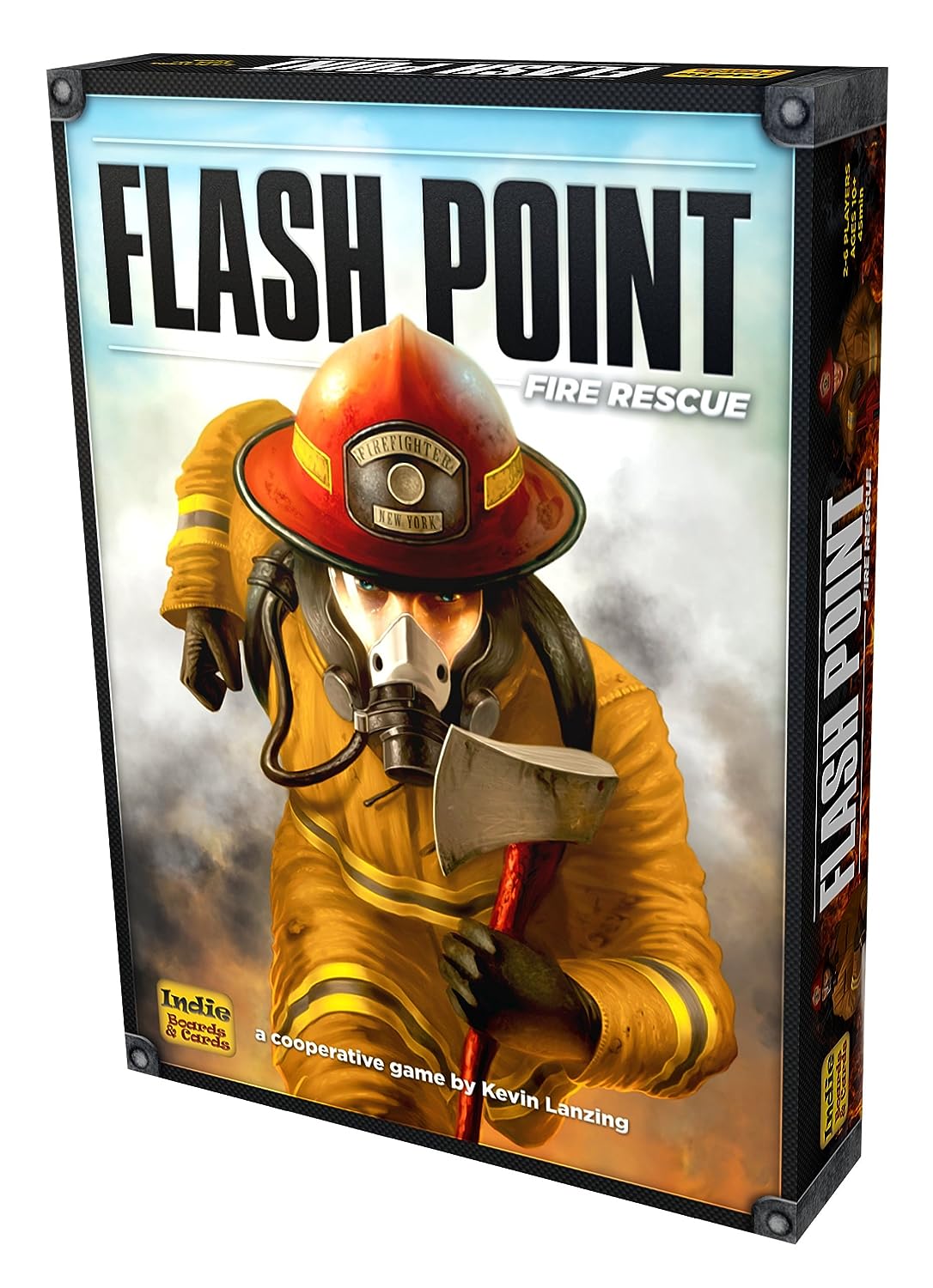 From BGG:
“The call comes in… “911, what is your emergency?” On the other end is a panicked response of “FIRE!” Moments later you don the protective suits that will keep you alive, gather your equipment and rush to the scene of a blazing inferno. The team has only seconds to assess the situation and devise a plan of attack – then you spring into action like the trained professionals that you are. You must face your fears, never give up, and above all else work as a team because the fire is raging, the building is threatening to collapse, and lives are in danger.

You must succeed. You are the brave men and women of fire rescue; people are depending on you. This is what you do every day.

There are two versions of game play in Flash Point, a basic game and expert game.
In both variants, players are attempting to rescue 7 of 10 victims from a raging building fire. As the players attempt to rescue the victims, the fire spreads to other parts of the building, causing structural damage and possibly blocking off pathways through the building. Each turn a player may spend action points to try to extinguish fires, move through the building, move victims out of the building or perform various special actions such as moving emergency vehicles. If 4 victims perish in the blaze or the building collapses from taking too much structural damage, the players lose. Otherwise, the players win instantly when they rescue a 7th victim.

The expert variant included in the game adds thematic elements such as flash over, combustible materials, random setup, and variations on game difficulty from novice to heroic. The game includes a double sided board with two different building plans and several expansion maps are available.” 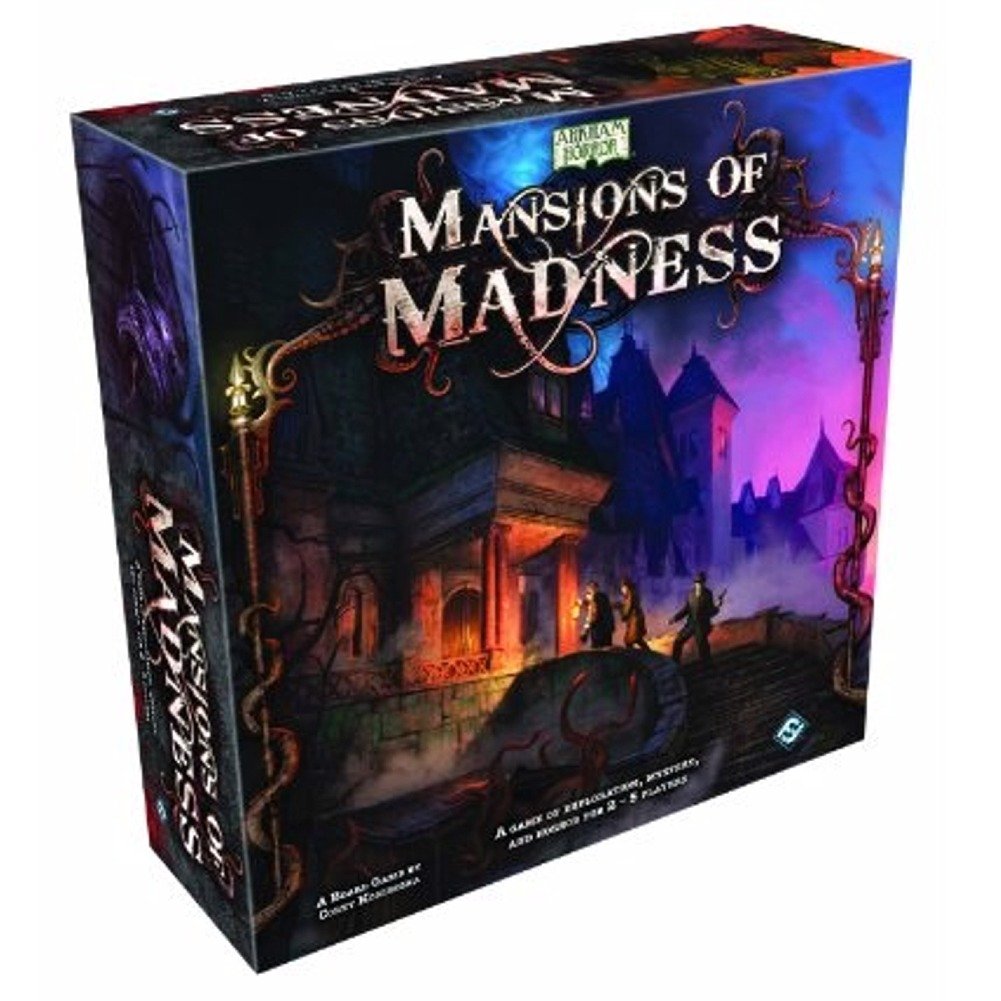 From BGG:
“Horrific monsters and spectral presences lurk in manors, crypts, schools, monasteries, and derelict buildings near Arkham, Massachusetts. Some spin dark conspiracies while others wait for hapless victims to devour or drive insane. It’s up to a handful of brave investigators to explore these cursed places and uncover the truth about the living nightmares within.

Designed by Corey Konieczka, Mansions of Madness is a macabre game of horror, insanity, and mystery for two to five players. Each game takes place within a pre-designed story that provides players with a unique map and several combinations of plot threads. These threads affect the monsters that investigators may encounter, the clues they need to find, and which climactic story ending they will ultimately experience. One player takes on the role of the keeper, controlling the monsters and other malicious powers within the story. The other players take on the roles of investigators, searching for answers while struggling to survive with their minds intact.

Do you dare enter the Mansions of Madness?” 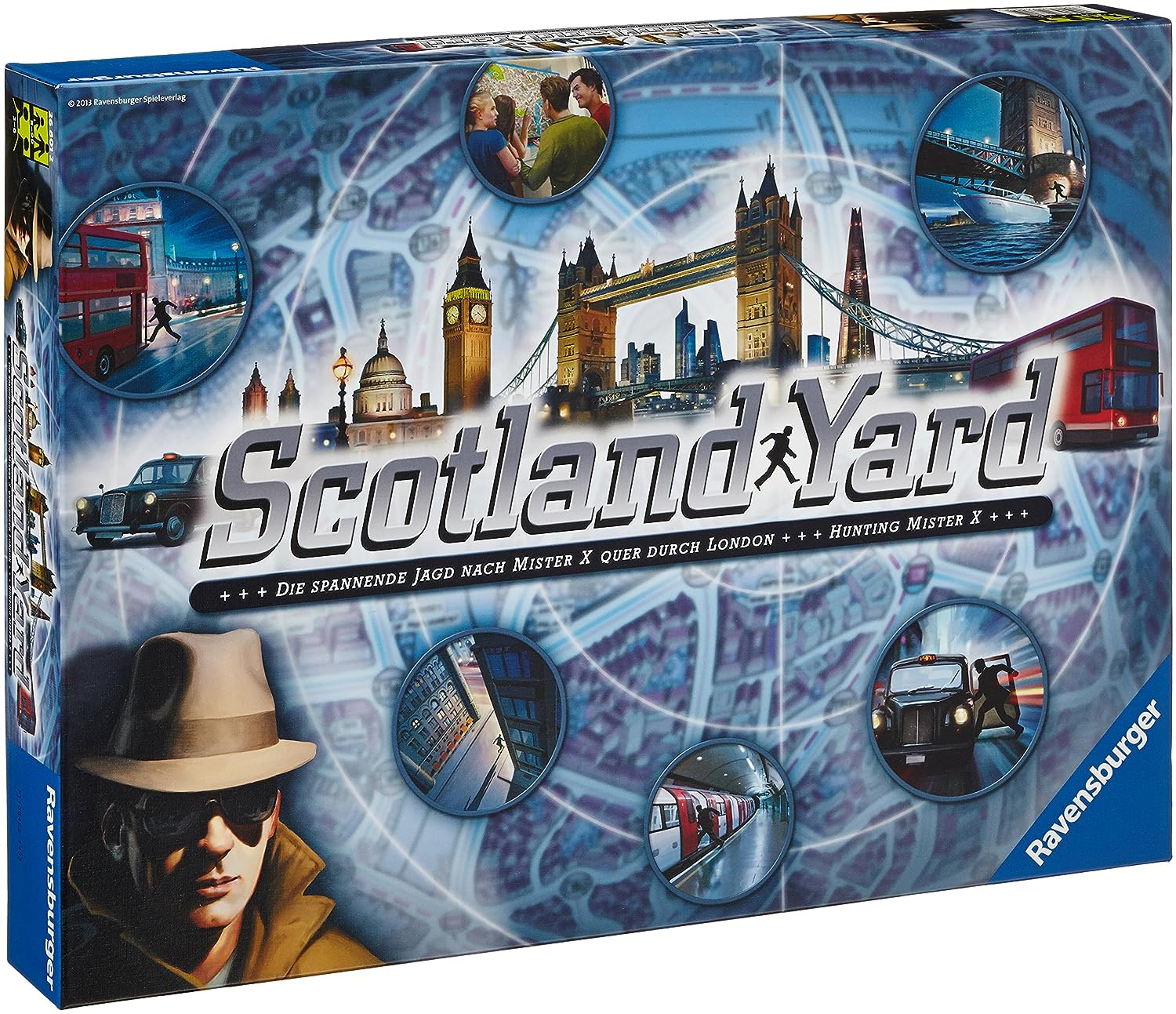 From BGG:
“In Scotland Yard, one of the players takes on the role of Mr. X. His job is to move from point to point around the map of London taking taxis, buses or subways. The detectives – that is, the remaining players acting in concert – move around similarly in an effort to move into the same space as Mr. X. But while the criminal’s mode of transportation is nearly always known, his exact location is only known intermittently throughout the game.”

Risk: Star Wars Edition – 20% Off!
Not my typical deal posting but a new and exciting game. 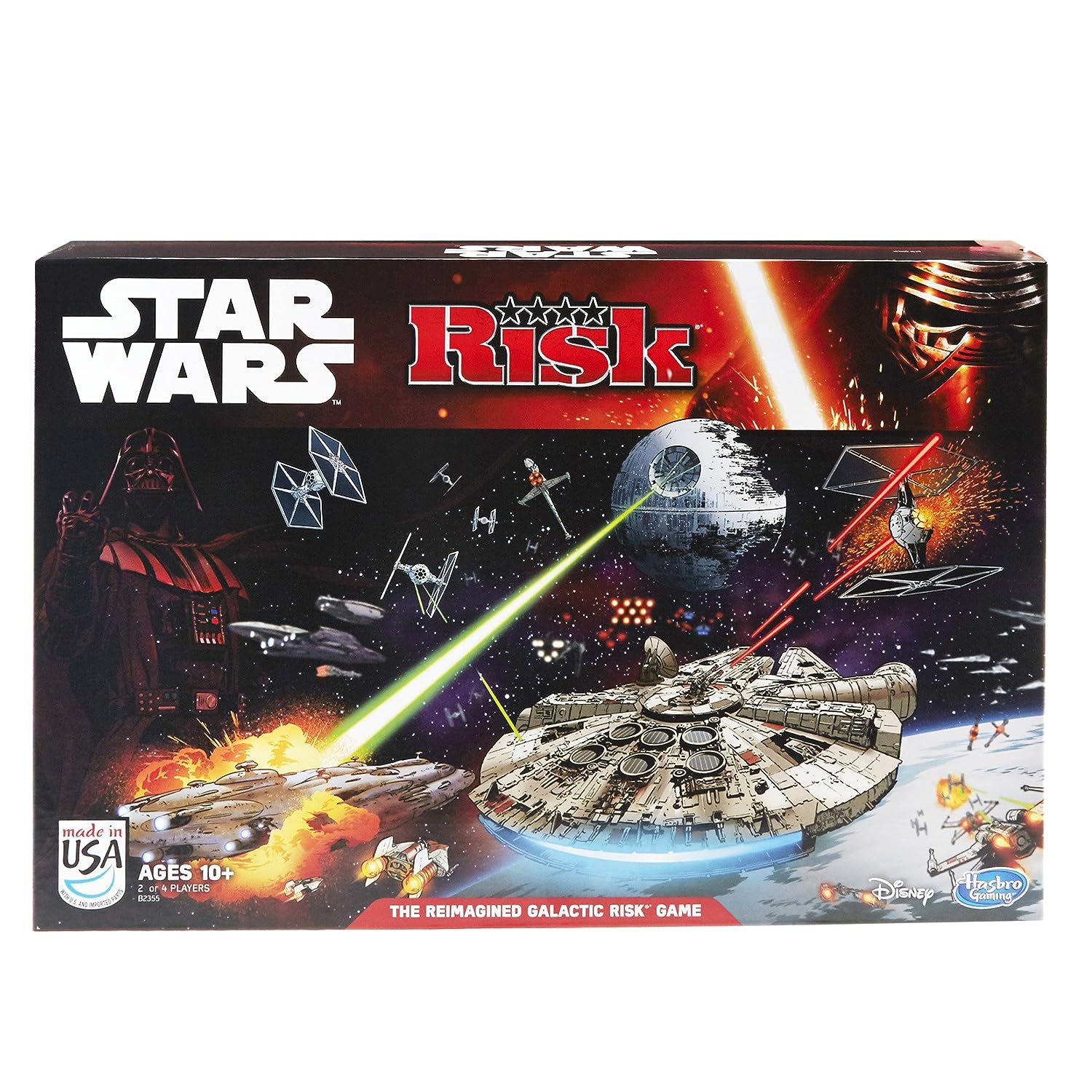 From Amazon:
“The Risk: Star Wars Edition game lets players recreate the dramatic final moments of Star Wars: Return of the Jedi. Across a TIE fighter-shaped gameboard, players can determine the fate of the Star Wars universe through 3 concurrent, yet distinct, battles. The 3 battles going on simultaneously are: the attack on the Death Star, the shield assault, and the battle between Luke Skywalker and Darth Vader. Opponents choose to play as the light side or the dark side of the Star Wars saga, and use the classic Risk dice to control characters and ships. No matter which side is victorious, the game is sure to be filled with action and adventure! Hasbro Gaming and all related terms are trademarks of Hasbro. Star Wars products are produced by Hasbro under license from Lucasfilm Ltd.”

Ninja Legend Of The Scorpion – 55% Off!
Originally posted by Board Gaming Deals 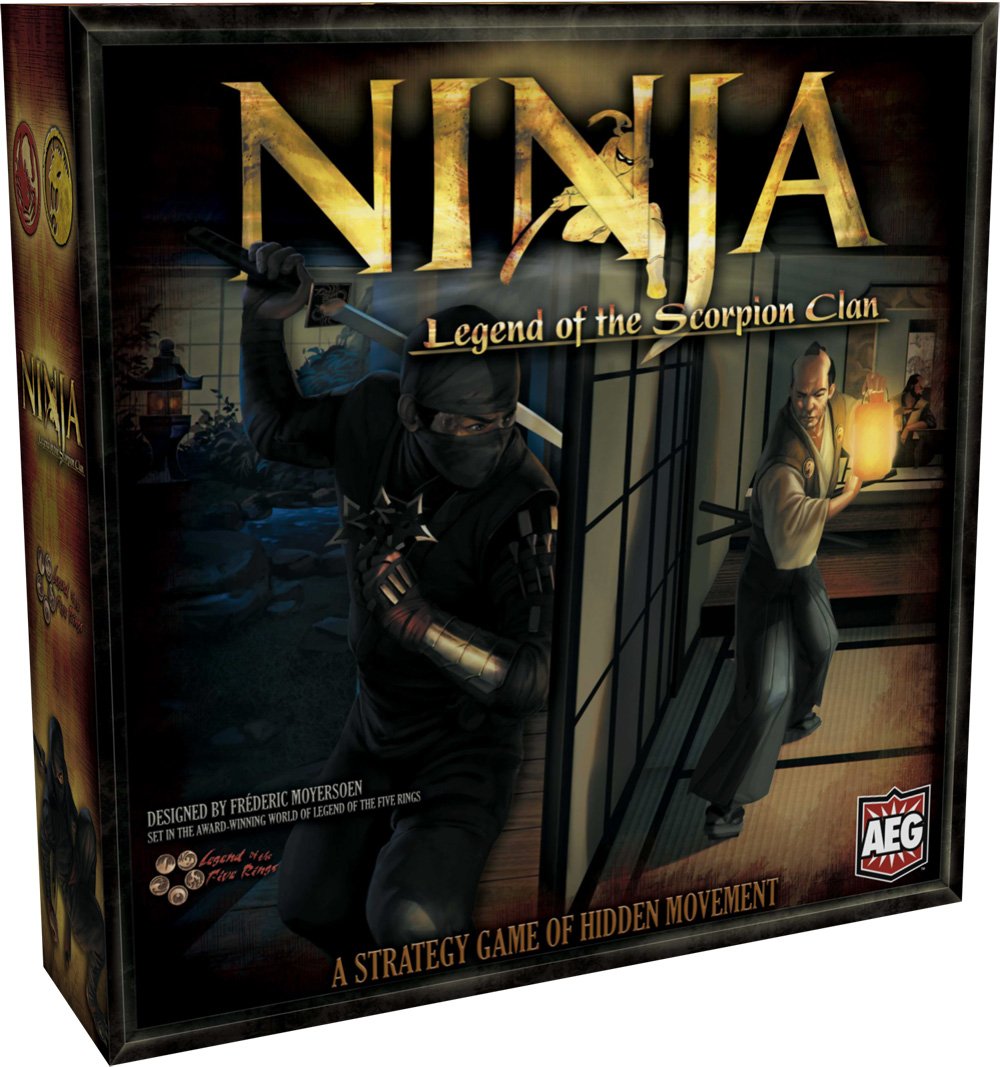 From BGG:
Ninja Legend Of The Scorpion is “A Strategy Game of Hidden Movement

The night is quiet, but somewhere in the darkness shadows are moving. A ninja and a double-crossing samurai sneak into the Lion Clan castle, intent on completing their dastardly tasks. Though alert, the Lion guards are as yet unaware that anything is amiss…

This tense standalone game pits Lion Clan samurai guards against a Scorpion Clan ninja and his traitor ally. As the ninja or the traitor, you will use hidden movement to sneak into the castle, eliminate guards, find your mission objective, and escape. As the guards, you will use your wits and superior numbers to thwart the sinister Scorpion.

In this exciting new game set in the world of Legend of the Five Rings, you must use your limited resources, powers of deduction, and a touch of guile to outthink and outmanoeuvre your opponent. Daring, planning, and a little luck will determine whether you triumph or meet your end on 3 feet of steel.”

From BGG:
“As new villains appear to lay claim to the world of Indines, new heroes rise to challenge them. BattleCON: Devastation of Indines puts you in control of 30 mighty heroes and deadly villains to decide the fate of the world.

BattleCON: Devastation of Indines is a standalone dueling card game designed for head-to-head and team play. Each player selects a character who uses a unique gameplay mechanism to give them an edge in combat. Take control of guitar-playing summoner, a pair of tag-teaming werewolves, a prodigal paladin, a genius artificer, and more! Each character’s play style requires new strategies, but uses the same foundational tactics, making a new character easy to learn, but challenging to master.

Players move along a seven-space-long board, trading blows and attempting to strike the opponent, using attacks formed by combining a character’s unique styles and abilities with a set of basic cards that all characters share. The last player standing wins!

BattleCON: Devastation of Indines can be played on its own or combined with BattleCON: War of Indines to create an even greater pool of characters and play variants.

Included with the game: BattleQUEST Guide

The BattleQUEST Dungeon Guide contains six adventures (3 solo and 3 cooperative) for players. Using BattleQUEST, players can play alone or cooperatively against automated enemies in an attempt to defeat the final boss and claim victory!”

From BGG:
“The King is dead, and all are making their play for power. From the depths of the kingdom, armies are on the move, castles are being fortified, and war is in the air. The General and the Heir, the Fiend and the Vizier, the Barbarian and the Dark One — all prepare to take the land by force. Only the bold shall survive in this realm of heroes!

Realm of Heroes is a strategy game based in Western fantasy in which players build castles and recruit heroes to fight for their cause. Players not only move against each other, but also must deal with an evolving board that can derail the best laid plans. Using minimal luck, Realm of Heroes is a game in which a player on top can find himself in a rapidly collapsing position.

After the map is set up (either by scenario or at random), each player places his leader and a tower on the map. During a player’s turn, existing plague may spread to nearby locations. Second, unsupported heroes die and are replaced by plague. Third, players may reinforce their position by placing or upgrading units on the map. Finally, players move some, none or all of their heroes around the map to capture more territory, destroy other heroes and capture the other players’ leaders to win the game.

Do you have what it takes to emerge victorious in this Realm of Heroes?”

From Miniaturemarket.com:
“Upgrade your board games with 156 custom-made resource tokens that look and feel just like their real-life counterparts. The creators of Viticulture, Euphoria, and Tuscany bring you the Stonemaier Games Treasure Chest, an assortment of premium-grade realistic resource gaming tokens (gold, wood, ore, stone, clay, and gems). All tokens come pre-painted.