Amazon Prime is $67 TODAY ONLY! 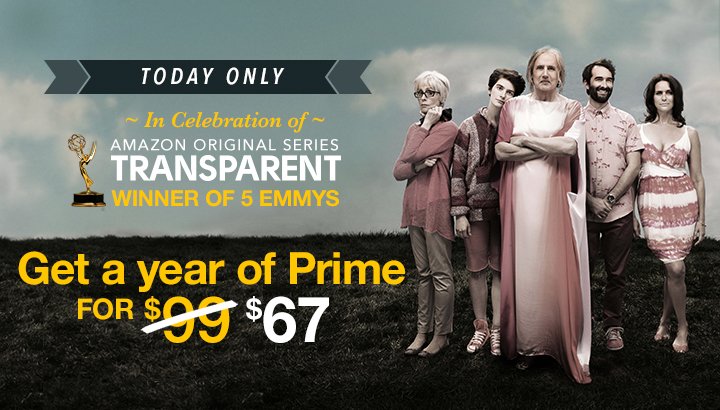 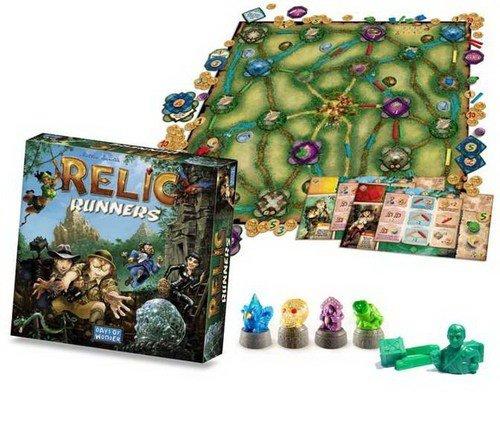 From BGG:
“In Relic Runners, each player takes on the role of a character keen to exploit and acquire relics that have been unearthed in a long lost part of the jungle. Each would-be archaeologist has a colorful past — retired university professor, former army captain, etc. — and wants to be the first to get their hands on the precious loot to earn the most victory points.

Players must navigate a series of paths in order to visit temples. The archaeologists are restricted in their movement by their access to rations, but thankfully they can place markers on paths to allow them to travel for free in future turns. The players also have a toolkit that can be upgraded in three particular ways to break the rules in some way or offer them an advantage as they move around.

Each time a player visits a temple, he takes a token. Initially the temples offer up victory points or some form of in-game bonus. When the final token is taken, a relic is placed there to be collected. The players earn large victory points for collecting relics of different types (set collection) and players can also earn bonus points for creating long routes and traveling along these to collect relics.” 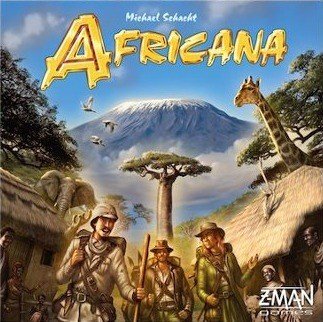 From BGG:
“In Africana, players travel through Africa, taking part in expeditions and trying to be the first to reach various destinations. With the money they earn, they can buy adventure cards that earn them precious antiques. Africana features the “Book of Adventures” game system from Schacht’s Valdora in which players can acquire cards that are laid out like books, with players “turning the pages” to find the adventure cards they most want.

The game board in Africana shows the continent divided in half at the equator, with the cities in the north half colored brown and the cities in the south white. Adventure cards with a brown border can be acquired only in the south and must be delivered to the north, while white-bordered adventure cards take the opposite route. Five expedition cards – each showing the starting and ending location and a reward for completing the expedition – are laid face-up on the game board.” 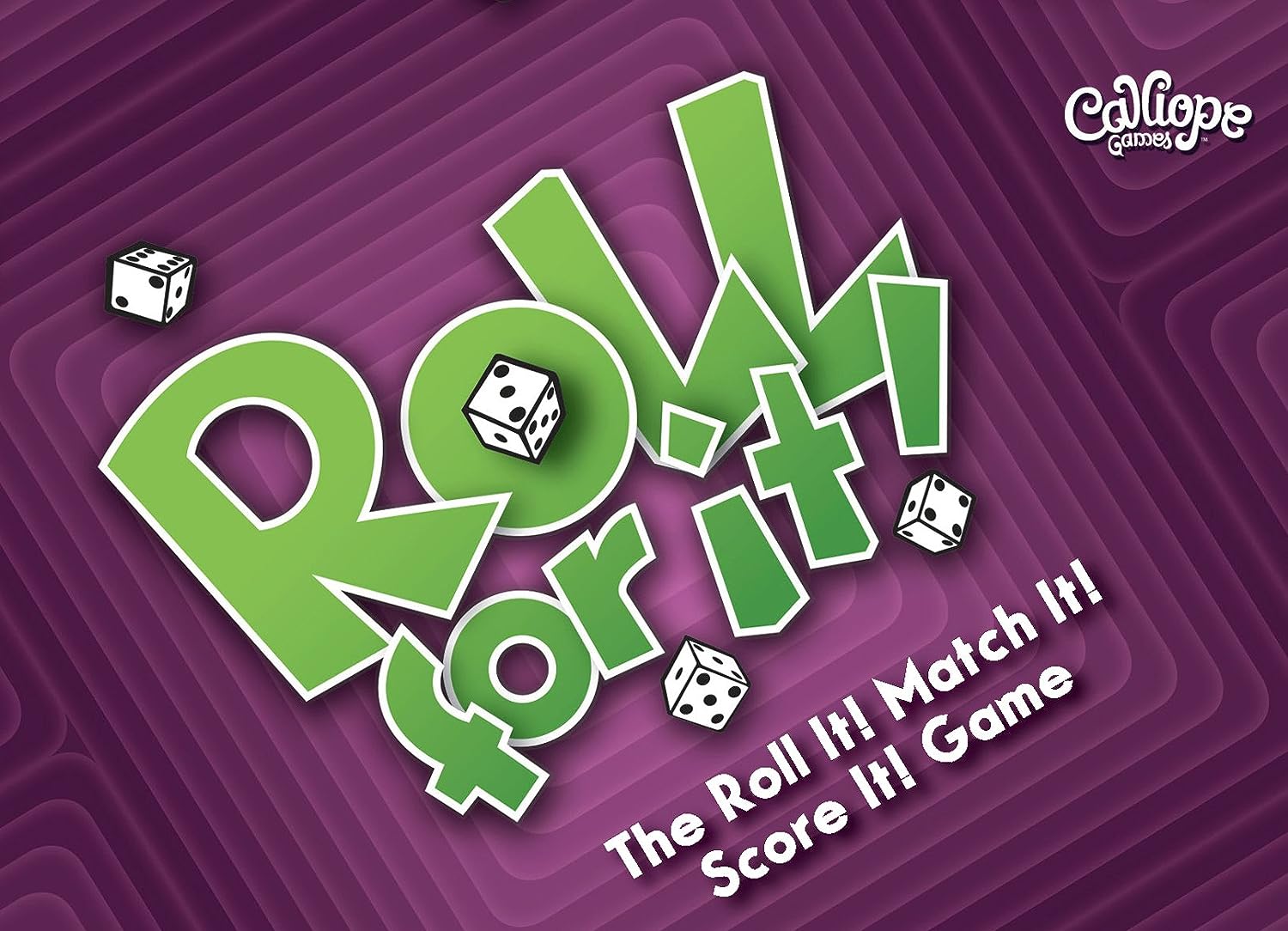 From BGG:
“Roll For It! is a casual, family-friendly dice and card game. Each player starts the game with six dice of a single color, and three target cards are laid face-up on the table. Players take turns doing the following: On a turn, a player rolls all of her dice not already on cards, then places any dice that match the targets on the corresponding cards. (Alternatively, before taking her turn, a player can first choose to reclaim all of her dice from all cards.)

If the player now fulfills the target with her dice – e.g., a pair of 3s, a quartet of 6s, or a specific combination of numbers – she claims the card, takes back her dice (and returns any other dice on the card to their owner), then places a new card on the table. Each card is worth a certain number of points. The first player to earn forty or more points wins!

Two Great Games For Under $20 Each!

LIMITED TIME ONLY! Krosmaster: Juinor and Frigost are now both ONLY $30! Sale ends October 7th!

From BGG:
“In the puzzle game Dimension six task cards are laid out each round, with these cards dictating how the balls in the game should be stacked on top of one another and side to side. These challenges aren’t easy as some colors shouldn’t touch one another.

Fast puzzle-solving is important, but more than that in the end whoever solves the most of these difficult tasks wins.”

From BGG:
“The year is 3012. It’s been a millennium since the Armageddon. Deep in the Yucatan jungle, humanity has mutated, degenerated, and segregated into five clans: Jaguar, Snake, Monkey, Gar, and Bat. These clans now battle it out for dominance in the region, cooperating when it suits them and actively working against each other when the opportunity arises.

In 3012, players start the game with small decks of Scout cards, which provide gold to make purchases. Two piles of cards – an Ally deck and a Weapon deck – provide static cards to buy, with three cards from each deck always available to purchase each round. Cards that are not bought remain there for other players to buy. Two non-static Action decks – one with cheap cards, the other expensive – are also available, and at the start of your turn, you reveal one card from each of these two Action decks. You get the benefits of the Action cards you reveal, whether you buy them or not, and they’re removed from play if you don’t buy them.

When you have amassed enough combat skill through Allies, Weapons, and Action cards, you can attempt to prove your worth by facing a beast in four decks of Encounter cards, ranging from easy to very difficult.

Unlike most deck-building games, there are many points of interaction in 3012, so players are never out of the action! And you always get to refill your hand to its maximum size at the start of your turn, so you are never penalized for interacting during other players’ turns.

The game ends when one of the Heroes reaches Level 5. The player with the most victory points wins the game.”

From BGG:
“The Dwarf King (Le Roi des Nains) is a trick-taking game played with a deck of 53 cards: three suits (Dwarves, Goblins and Knights) of thirteen cards each and fourteen special cards. The game also includes twenty contract tiles.

The game is played over seven rounds. At the start of a round, the dealer randomly draws one special card, reads it to all the players, shuffles it into the deck, then deals the deck out evenly to all players. (The dealer for the first round is the game’s owner; for subsequent rounds, the dealer is the one who took the 5 of Dwarves in the previous round.) The player who receives the 5 of Knights draws a contract tile, reads it, then chooses one of the two scoring rules on it to apply for that round.

The player holding the 5 of Goblins leads on the first trick. Players must follow suit if possible, and the game inclues no trump. The highest card played of the suit led wins the trick and leads to the next trick. Once all cards have been played, players tally their points (possibly negative), remove the special card and contract tile from the game, then shuffle for the next round.

The player who scores the most points over seven rounds wins the game.”