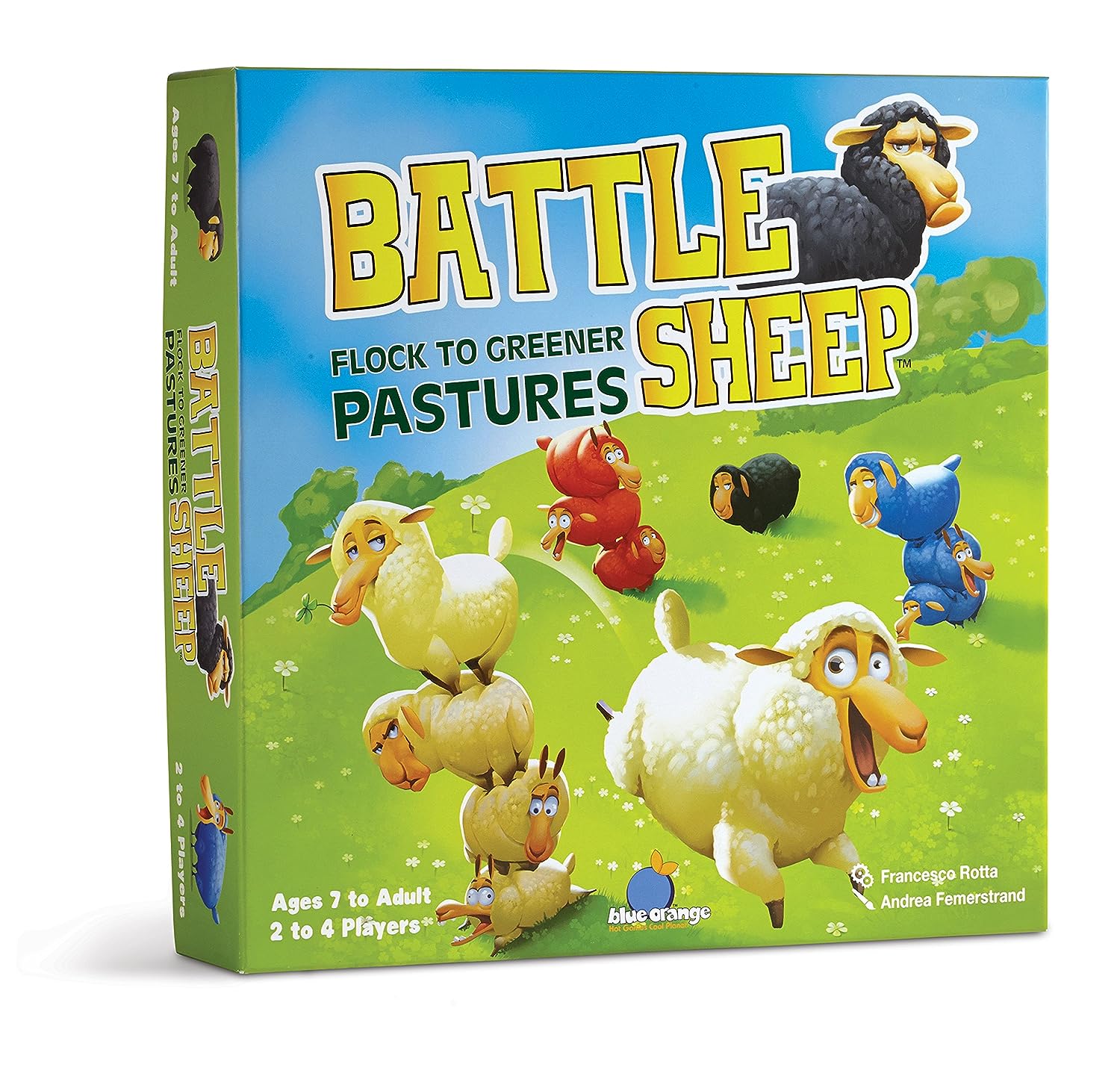 From BGG: In Battle Sheep (first released as Splits), players start the game by constructing the board from identical four-hex tiles, then each player places his/her tall stack of discs on one of the border hexes. Players take turns removing some number of discs from the top of one of their stacks, moving that new stack of discs as far away as it can go in a straight line. Players must leave at least one disc behind when moving, so the board gradually fills up and movement opportunities become more and more scarce. The player occupying the most spaces at the end of the game wins! 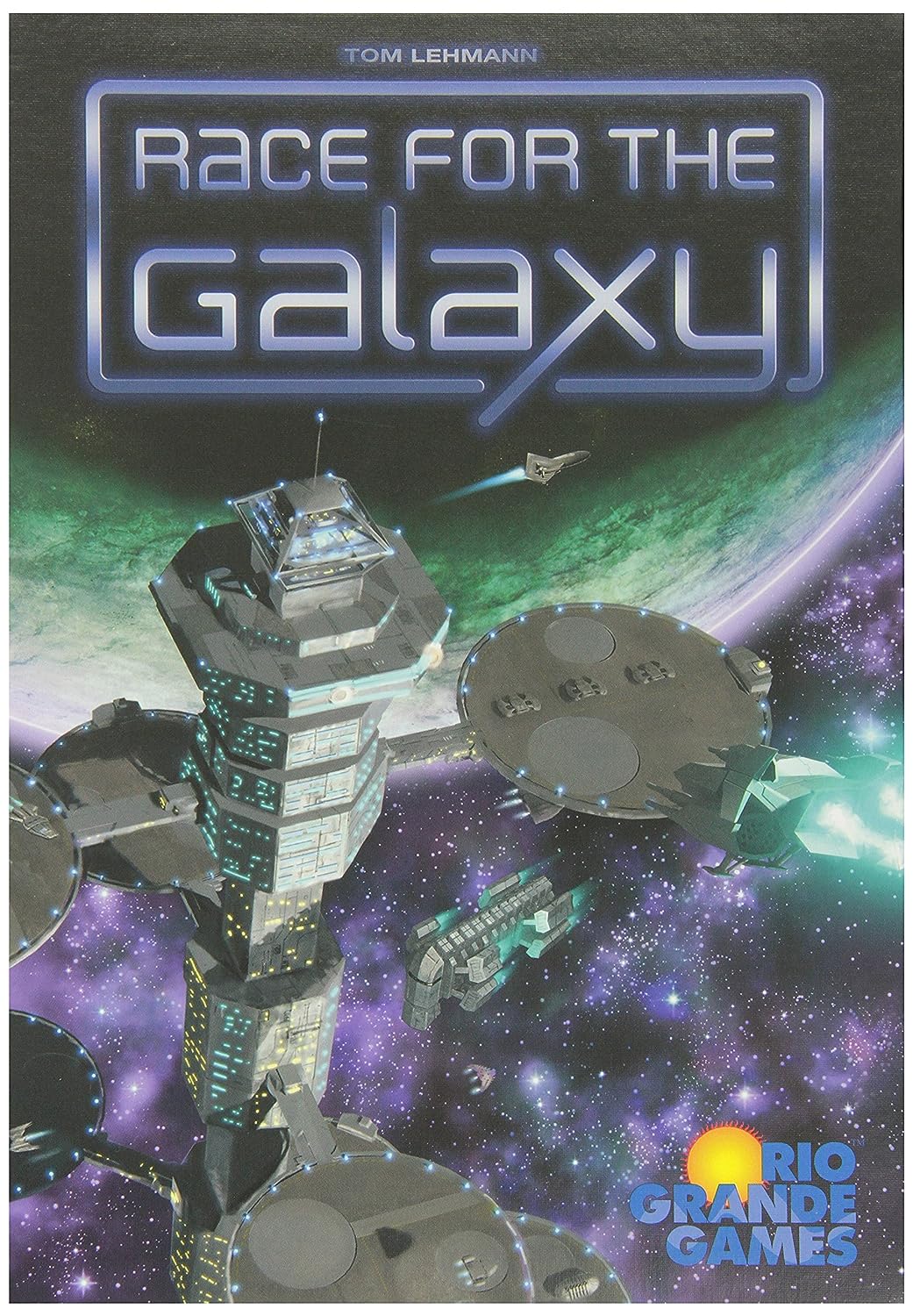 From BGG: In the card game Race for the Galaxy, players build galactic civilizations by playing game cards in front of them that represent worlds or technical and social developments. Some worlds allow players to produce goods, which can be consumed later to gain either card draws or victory points when the appropriate technologies are available to them. These are mainly provided by the developments and worlds that are not able to produce, but the fancier production worlds also give these bonuses.

At the beginning of each round, players each select, secretly and simultaneously, one of the seven roles which correspond to the phases in which the round progresses. By selecting a role, players activate that phase for this round, giving each player the opportunity to perform that phase’s action. For example, if one player chooses the settle role, each player has the opportunity to settle one of the planets from their hand. The player who has chosen the role, however, gets a bonus that applies only to them. But bonuses may also be acquired through developments, so you must be aware when another player also takes advantage of your choice of role. 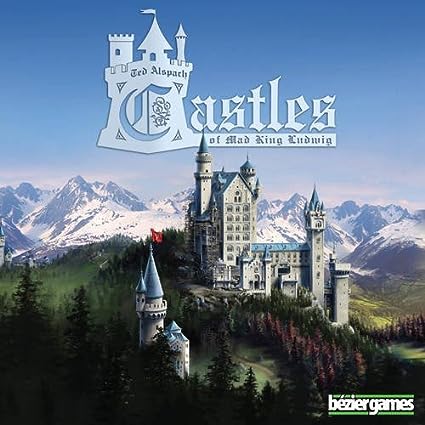 From BGG:In the tile-laying game Castles of Mad King Ludwig, players are tasked with building an amazing, extravagant castle for King Ludwig II of Bavaria…one room at a time. You see, the King loves castles, having built Neuschwanstein (the castle that inspired the Disney theme park castles) and others, but now he’s commissioned you to build the biggest, best castle ever — subject, of course, to his ever-changing whims. Each player acts as a building contractor who is adding rooms to the castle he’s building while also selling his services to other players.

In the game, each player starts with a simple foyer. One player takes on the role of the Master Builder, and that player sets prices for a set of rooms that can be purchased by the other players, with him getting to pick from the leftovers after the other players have paid him for their rooms. When a room is added to a castle, the player who built it gains castle points based on the size and type of room constructed, as well as bonus points based on the location of the room. When a room is completed, with all entranceways leading to other rooms in the castle, the player receives one of seven special rewards.

After each purchasing round, a new player becomes the Master Builder who sets prices for a new set of rooms. After several rounds, the game ends, then additional points are awarded for achieving bonus goals, having the most popular rooms, and being the most responsive to the King’s demands, which change each game. Whoever ends up with the most castle points wins. 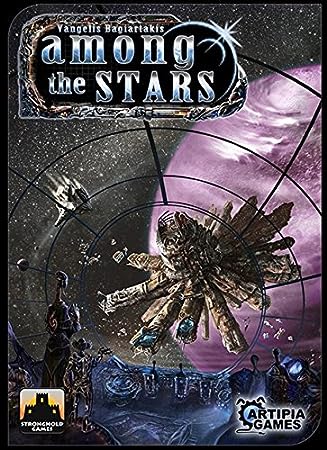 From BGG: Among the Stars takes place in a war-ravaged galaxy where the warring alien races have declared peace in the wake of a threat with the potential to destroy them all. An Alliance is established to build space stations throughout the galaxy in order to promote trade among the races, strengthen diplomatic relations, and defend against this impending threat. Each player takes the role of one of those races trying to build the greatest space station. Through card drafting, the players select locations, and use these to build their station, scoring victory points based on the placement. The construction lasts four years, and alien race with the most points at the end wins. 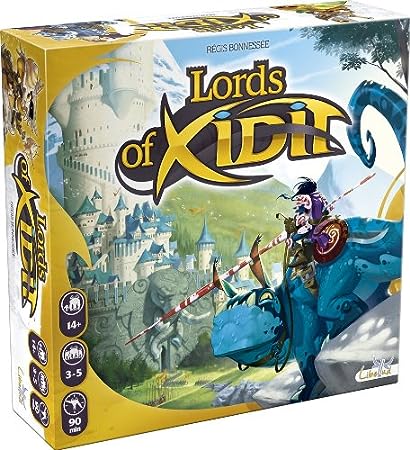 From BGG: The Black Southern Host has arisen, corrupting the hearts of the indigenous creatures. Afflicted by a mysterious sickness, they are attacking human cities. The last remaining hope for restoring peace to Xidit lies with the Kingdom’s noble heirs, the Idrakys. As one of them, you must roam the Kingdom recruiting brave soldiers and reclaiming threatened cities. Your bravery will not go unrewarded: accumulate wealth, send bards to sing your praises, and build Sorcerers’ Guilds!

Lords of Xidit features simultaneous programming and an elimination-based scoring system that leaves no room for complacency! In more detail, at the end of the game players compare their influence in one category and the player with the least influence is eliminated and his pieces removed from the board; players then compare influence in another category, with a player again being removed. The order of elimination is randomly determined at the start of play, forcing you to thinking in different ways each game.

Prepare to ride out, Idrakys, and forge your legend!