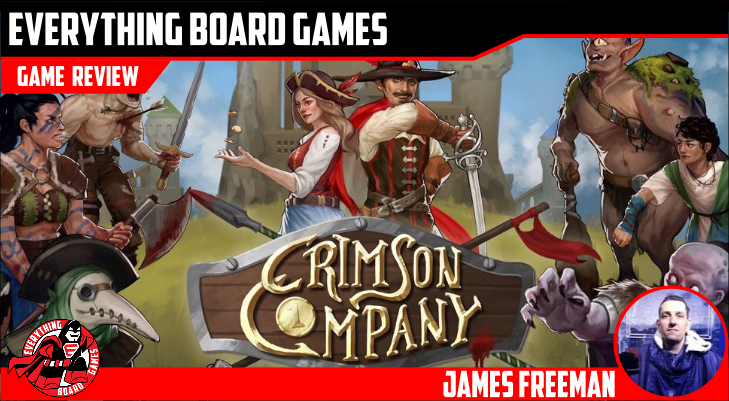 
In Crimson Company, two opposing players take on the roles of adventurous noblemen in a cutthroat fantasy world. In a battle of wits, they assemble armies of sellswords, from hardened warriors and shady merchants to mythical creatures as old as time.

Your goal in a match of Crimson Company is to conquer two of the three castles in the center. You conquer a castle by amassing more strength than your opponent in the castle's lane by the time that lane is scored. A lane is scored once a player owns at least four cards in it.

Cards represent a large variety of characters, all of which have specific strength values and unique effects. The latter are either one-time instant effects that happen when a card is played, or they are triggered in specific phases of the game. Four randomly-drawn cards from the character deck are "on offer." You may bid coins on only one of those at a time. Then, your opponent decides to either pay you off, doubling the coins you bid, or pass and let you play the card.

Have you ever had a disagreement with your friend and to settle it you decided to have a bidding war and hire people to fight your battle for you?Then this is the game for you!

You start by placing the three Castle cards representing the three lanes between both players. Lanes are separated into two sides (you and your opponent's). Put the coin supply near the Castle cards. Shuffle the deck of Character cards, and place it next to the Castle cards face up so you can always see the next card to be drawn. Draw four cards, and place those characters next to the three lanes (this is the initial market row). Decide who goes first with a flip of the coin, and the first player gets three gold, while the second player gets four.

A player's turn consists of four possible steps, not all mandatory.

Recruitment: the active player places at least one coin on one of the cards currently in the offer row. The opposing player can pass or match the number of coins. If they pass, the money goes to the supply. However, if the opposing player matches the coins, they get that card, and the active player receives all the coins (their initial offer plus the opponent's coins).

Deployment: The active player plays all their purchased cards. They can choose to place the card/cards into any available lanes of the castle on his side. You do not need to place them all in the same lane. Once deployed, the card effect will take place. Income and Recruitment cards have effects that happen every round after they are played until they are eliminated.

Scoring: Check all the lanes from left to right. If any player has four or more cards in a lane, score that lane.

The box is a little bigger than it needs to be. The game could have fit in a deck box, but you do get a full-sized manual this way, which is nice. There are a wide variety of characters, and each has a distinct look. These are quality drawings that could fit in an array of games. The gold coins and card stock are durable, as well.

The game is straightforward to teach. I also appreciated the variety of the characters you can recruit. The designers went for some very nontraditional characters. Some of my favorites are the illusionist, clumsy ogre and grave robber.

The start of the game can be a very slow burn. It takes longer than I would like for the gameplay to ramp up.

This game will frustrate you. Your best-laid plans will crumble to pieces in front of you. You will get matched in the recruitment phase when you least expect it. You will bid high thinking your opponent will match you, only to have them let that card go. And you have to pay attention to which card is up next for bidding after your turn is over.

This might sound like a negative review, but it is not! This game is high-level two player take that, and I want you to know that going into it. The ability to match the opposing player's bid really adds something different to the game, and the variable powers always have you evaluating your strategy. Great replay value for a small box game.


Check out Crimson Company on: 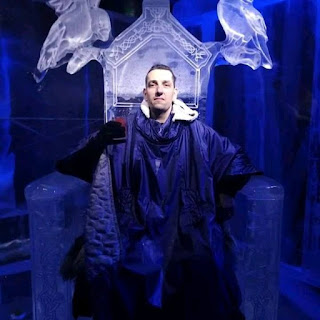 James is a child of the 80's he grew playing D&D and Stratego. He currently owns more games than his understanding wife of 20+ years thinks he should. James lives in Buffalo, New York with his previously mentioned wife, 2 teenage kids and one Havanese dog. Also, if someone outside of Buffalo says they serve buffalo wings, they are lying.